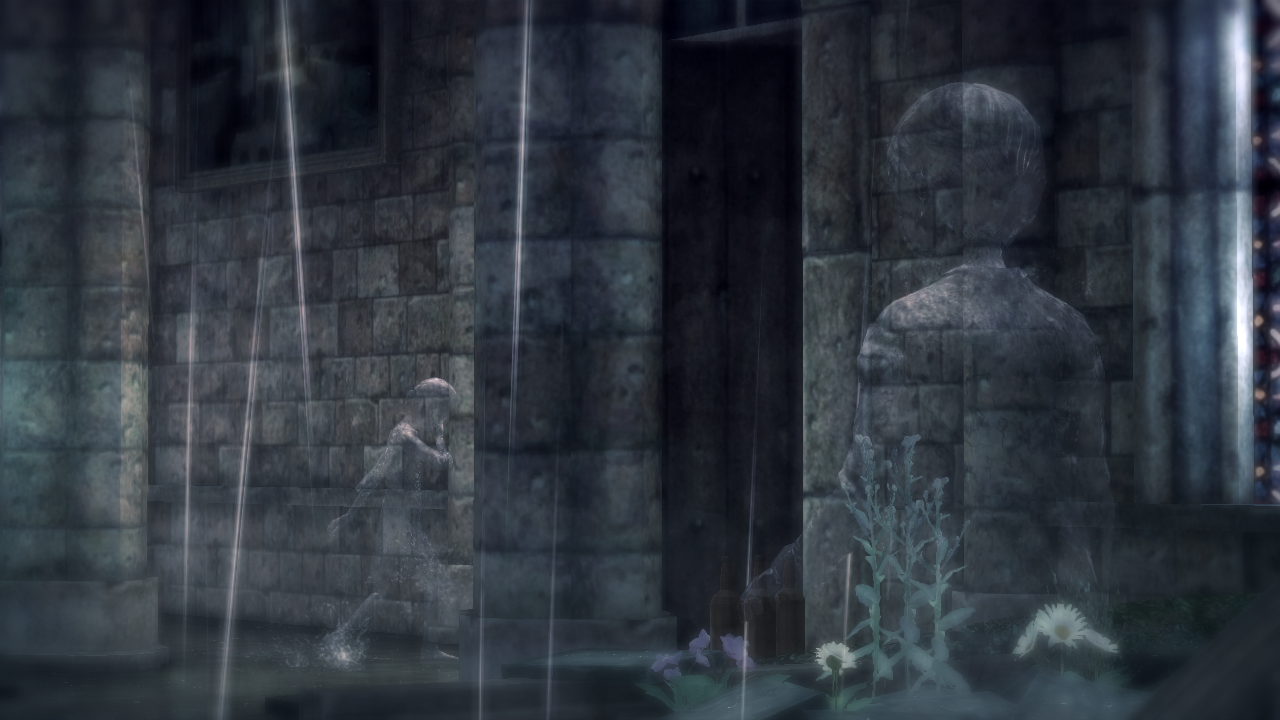 At first glance, rain looks to be an adventure game in the same vein as Journey. It presents a unique world that begs to be explored with many challenges for you to overcome. But once you're past the surface, rain feels more like a game that's missing out on its own potential.

Rain tells the story of a young boy, who, while lying sick in bed, notices the shape of a young girl outside his window being chased by a tall, horrific creature. Climbing out of his window to follow them, the boy enters a world where's he's only visible while standing in the rain. But this other world is also filled with terrifying creatures, so the young boy must journey through the rain in the hopes of catching up with the mysterious girl and returning to his home.

Rain is best described as an adventure title featuring some stealth, puzzle, and platforming elements that don't meet expectations as the game goes on. Design-wise, the world of rain is very dreary, which does an excellent job of complementing the somber story of two lost children trying to get back home safely during a night filled with endless rain and monsters. With fixed camera angles that prevent you from exploring the empty city in depth, and text boxes that tell you the story rather than show you, you'll feel more like rain is guiding you along on rails over letting you experiencing the game at your own pace - something that will feel like a missed opportunity to adventure game fans.

The creatures you'll encounter look very unique (especially the giant, imposing Unknown which hounds you and the girl for most of the game) and many of rain's puzzles involve defeating or sneaking by these monsters to safety. Like the young boy, they'll become invisible outside of the rain, so on several occasions you'll have to pay close attention to your surroundings to make sure you aren't blundering into any of your foes by accident. Unfortunately, this is about as dangerous as encounters with enemies can become, and outside of a few hectic chase sequences, you'll rarely feel like you're in any true danger during your travels.

In later chapters, where the levels start to look a little like an MC Escher painting, you'll still have the same basic platforming and puzzle elements that are present throughout the game - run here, jump there, or push a block around in order to reach a ledge. There are environmental obstacles to contend with, such as mud puddles that will make you partially visible to enemies when you're outside of the rain, but many of the puzzle mechanics that rain introduces barely last longer than a chapter before being forgotten. One example is a sequence where you have to hide under tall, docile creatures that can shield you from the more hostile monsters, but these friendly beasts never appear again until the last chapter - and even then, they just serve as a background piece. The fixed camera angles can also make jumping a particularly hazardous action at times, so you should expect to misjudge a jump or two.

While most of the gameplay is simple, rain does have its challenging moments, such as one tense segment in a sewer where you must carefully avoid a series of invisible monsters using only the splashes of their footsteps, but such moments are few and far between. If you do happen to get stuck on a particular puzzle, the game will offer up hints at the press of a button (although sometimes a little too eagerly). You can only ignore the hint prompt versus disabling it entirely, which gives one the sense the game wants to hold your hand while you try to avoid a monster or unlock a door versus letting you figure it out on your own. In the event you do fail and can't quite avoid a monster's attack or miss a jump, rain takes a page from Limbo, and treats you to an unsettling failure screen where the young boy's body will be violently thrown around like a ragdoll. The brutality of the failure screen feels out of place with the otherwise straightforward, children's book style narrative, and it might make you feel disconnected from the game entirely.

Bottom Line: rain's premise is certainly interesting, and as far as aesthetics go, it does put you into a somber, yet intriguing world of dreariness. But rain's gameplay doesn't live up to its setting, and doesn't offer much more than the occasionally tricky puzzle or stealth sequence.

Recommendation: If you're looking for something short and artistic to play, rain isn't a bad choice, but you might feel disappointed at how limited the experience feels.