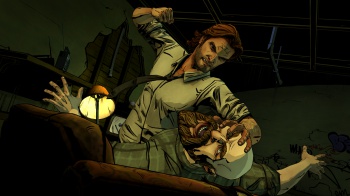 Beyond the mechanics of the conversations, the writing in Wolf Among Us is just superb, full of jokes, clever storybook references and dramatic wit. The writers know when to "show" and not just "tell". The script excellently gets across the required information of the setting without feeling like overt exposition. You figure out quickly when Bigby answers a call from Toad (from Wind in the Willows fame) that a glamour spell keeps most of the other-worldly nature of the Fables invisible to mundies. After a lengthy, viscious brawl with the Woodsman, you learn Fables are notoriously hard to kill.

There are a few sequences like the brawl where action takes over and the simple clicking or key-mashing prompts could be seen as glorified quick time events, but they are used effectively. If you fail to press the right key, sometimes the action continues with consequences of failure, but more often than not a kill screen is shown. The input needed from you is fudgy enough for the possibility of failure to be very slim, so the sequences increase the story's pacing without breaking it down through frustrating or repeated defeat.


Of course, Wolf Among Us being a detective story at its core, a Fable is killed somehow , and Bigby must find out what happened before the situation gets out of control. The mystery introduced in this first episode is a solid one, with multiple suspects forming a memorable police lineup: Tweedledee, Bluebeard, Prince Lawrence, and the Woodsman. Who done it? Even as the Wolf Among Us makes you ask the question, you get a sense of deeper machinations going on among the storybook characters stuck in New York City.


The only downfall of this first episode of The Wolf Among Us is its length - you can play through it in less than two hours. Like the Fables, you are forced to live in this fantastic world, but you don't want the story to end.

Bottom Line: An amazing introduction to the Fables setting, the first episode of The Wolf Among Us absorbs you fully into the character of Bigby Wolf through excellent writing and forcing the player to make engaging choices.

Recommendation: Buy the first installment if you like cliffhangers, or wait until all five are released to dive headlong into the full story. Either way, play The Wolf Among Us. You won't regret it.