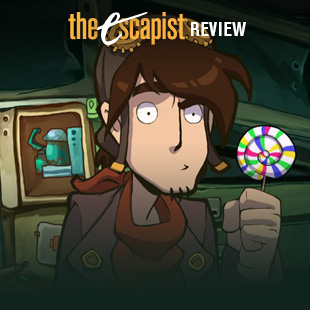 Goodbye Deponia, the final chapter in Daedalic's Deponia trilogy, makes a full-on effort at going out with a bang, pulling together just about everything from the first two games for a sprawling, epic grand finale. Alas, although it boasts some clever writing and genuine laugh-out-loud moments, it also suffers from a lack of focus and spots of "humor" that some players may find decidedly unfunny.

"Huzzah! He completely f*cked up!" the chorus sings midway through Goodbye Deponia, and there's no doubt about it: This is Rufus at his most appallingly oblivious and wantonly destructive. If you've followed along through his previous adventures, Deponia and Chaos On Deponia, you'll know that Rufus, the "hero" of the game, is a self-absorbed half-wit whose only talent is wreaking havoc and inflicting misery wherever he goes, while somehow emerging unscathed from the physical and psychological wreckage he leaves behind - more or less, anyway. His only goal in life is to escape the junk world of Deponia and reach the floating utopia of Elysium in the company of his new girlfriend Goal, herself an Elysian who fell to the surface thanks to Rufus' antics, but his scheming is complicated by the planet's looming destruction - instigated by none other than Goal's former fiancé.

The third game in the series follows the pattern of the first two very closely, beginning with a violently slapstick opening sequence that sets the tone for Rufus' callous disregard for anyone but himself, and then moving on to a relatively straightforward first chapter followed by an elongated middle section in the ruined city of Porta Fisco that bogs down under the weight of - and this is technically a spoiler, so read on at your peril - three Rufuses, the result of a desperate plan to save the day by cloning himself so he can literally be in three places at once.


It's a fun idea at first, as the three equally-clueless characters clash over who's going to be the hero, but it becomes a grind as they go their separate ways. Each of the trio has a unique mission to complete and they can be switched between at will, reflecting the simultaneous nature of their quests, but they must also sometimes interact and share inventory items. The mechanics of the shared inventory are very simple but it can be difficult to keep track of who's doing what and when objects in the possession of one Rufus should go to another. While it's occasionally necessary for them to be in specific locations in order to pass things around, the lack of any indication as to when this is required can be very frustrating. There's a certain feeling of aimlessness to it as well, since all three characters spend a lot of time leaping through some very tangential hoops that can make it easy to forget what they're supposed to be doing in the first place.


Worse, because they're only together for a short period after their creation and then at the very end of the game, the obvious comedic potential of three virtually psychopathic ultra-Stooges is never realized. Many of the familiar faces in the supporting cast, like Doc, Bozo, Donna and even Goal, take more of a back seat in Goodbye Deponia, effectively disappearing for much of the game, while the villainous Cletus and his putative partner in crime Argus take a more central role. But that too feels like an opportunity missed, as Rufus spends most of the game dodging rather than engaging with them and neither are as lively as in the previous chapters. Cletus, who came off as a slightly thick-skulled Hans Gruber type in the first game, is much more subdued (and less entertaining) this time around, while Argus seems to drop in from nowhere and then drop out just as quickly. In fact, as the plot progresses and their motivations grow clear, they both become somewhat sympathetic characters, and while that sort of growth may be seen as good storytelling, it's not particularly funny.