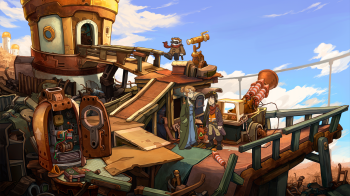 And the game is funny in spots, sometimes wildly so, but there are some potentially uncomfortable bits, too. Foremost among them is a segment in which a black woman dresses up as an organ grinder's monkey and dances in a bid to gain her freedom from the sewers beneath the city, a moment made even more egregious by the fact that she is, as far as I noticed, the only black character in the game. That she was compelled to do so by Rufus' unwittingly awful behavior does little to alleviate the utterly tone-deaf imagery, yet at the same time the game also makes jokes out of child abuse, child molestation, speech impediments (again) and suicide. There's enough offensiveness to go around, in other words; at one point an infant ingests a bowl full of anti-depressants and in response, Rufus feeds him an emetic, not because he's concerned for the baby's welfare but because he really needs those pills. It's packed with the kind of humor you don't tell people you laugh at, and if that's the sort of humor that you don't laugh at it, this probably isn't something you'll want to play.

There are also times when the game takes a bit of a dark turn, and while it's impossible to say much about the ending without spoiling it, the redemptive and not-entirely-happy twist is almost certainly not what anyone is expecting. The nature of the game leaves the door to another sequel open just a crack, but it also adds up to a conclusion that fails to satisfy and in many ways doesn't even really fit; it's like capping off a Wile E. Coyote marathon with an airing of Fantasia.


Goodbye Deponia is fun, but it's a lot of work too, and the finish isn't nearly as big as the original Deponia promised. The funny bits are genuinely good, if occasionally off-key, but they don't come nearly fast nor furious enough, and the ending doesn't really feel like one at all. You, like me, may well find yourself sitting through the credits waiting for a "real" conclusion that never comes.


Bottom Line: Goodbye Deponia is a perfectly serviceable adventure with some truly funny moments, but they're broken up by too many long, drawn-out segments that add little but minutes on the clock, and the finale is more of a sudden stop than an actual conclusion. The net result is an unfocused experience that feels more like just another chapter in an ongoing series rather than the final piece of a fast-paced comic trilogy.

Recommendation: Obviously not to be missed if you played the first two parts, but Goodbye Deponia requires patience and a flexible funny bone, and if you're lacking either you'll likely find it's not to your tastes.