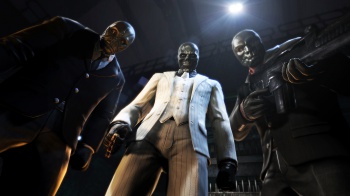 Batman: Arkham Origins had a lot, a whole lot, to live up to. In some ways, it stands up to the fantastic pedigree of the first two games, and in others, it falls short. Origins is supposed to act as a prequel, setting up the events of Asylum and City by showing the first time Batman comes into contact with some of the villains that play a part later. It features a young, inexperienced Batman grappling with the life of being a vigilante, long before he has a working relationship with the police and the citizens of the city. The core of what made those previous two games - and this one - great is still here, but it's clear that these are new developers taking a shot at another team's record. They don't hit the mark directly, but they're still on target.

Arkham Origins'free flow combat, sliding from enemy to enemy while countering attacks, is still one of the most satisfying experiences in action gaming. The stealthy predator sections still capture the fun of a Batman comic and are, without a doubt, the finest example of a game imitating the feel of its source material that I've ever seen. The new enemy types that the game has added - specifically, the martial artists, who can counter your counters - feel like a natural extension of the dynamic, split second decision button mashing that defines Arkham's gameplay. The only thing that's changed here is that the game doesn't quite understand its strengths enough in some parts. The combats are best when they're fast and furious, with difficult enemy combinations to master, but the latter parts of the game change out difficulty of enemies for sheer volume. That means a single missed block can sometimes mean having to restart five minutes of combat. The New Game+ mode, unlocked after the game is beaten, seems to understand that variety - not numbers - is where the real challenge is, and difficulty fiends will have an absolute field day with "I Am The Night" mode, so there's a lot of content to tackle for dedicated players.

The major new addition that the game brings, using Detective Mode abilities find clues, solve, and reconstruct crime scenes, is novel, but ends up serving a purpose more like an interactive cutscene. Batman is supposed to be the "World's Greatest Detective," and it's nice to feel that way while you're playing, but players here for the action combat and puzzles will likely feel frustrated by the slower pace of these sections. Indeed, I'd often solved the "mystery" of these scenes long before they were over, but was forced to go through the motions and carry out the task of highlighting and scanning evidence anyways. It's not an unwelcome, unfun, or uninteresting feature, but it's hardly a revolutionary addition to the game.