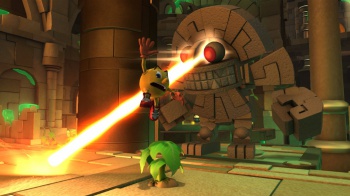 This isn't the Pac-Man you may remember from days of yore. This time, the arcade icon has a purpose higher than eating everything in sight, though that's still his main answer to conflicts in Pac-Man and the Ghostly Adventures. Pac's been tasked with saving his homeland from the evil ghost Betrayus, and this time he's not alone. He's got some significant upgrades distributed by returning enemies-turned-friends Inky, Pinky, Blinky, and Clyde, and he can now cash in on Pacworld buddies Cylindria and Spiral, providing a cherry helicopter and pineapple tank respectively for extra help.

As a new Pac-Man game and a companion piece to the cartoon of the same name, Ghostly Adventures offers a refreshing new plot for Pac-Man. Despite the present danger from Betrayus' attack on Pacworld, our yellow hero is allowed a personality that has been found lacking in previous installments. It's a running joke that he has to keep pushing off snacks in order to rid the world of ghost baddies, and it always seems like he's more interested in making sure his favorite restaurant, Pac-It-In-Burger, is still standing when all this is over. It's nice to see Pac have a reason to get some extra exercise by navigating sleek ice-coated levels and dark, ancient temples instead of the same-old stages we've been presented with before.

However, it's extremely obvious that this game is mirrored after a children's television show in almost all aspects, and this does the game a disservice. The mechanics feel like they're straining at the seams, striving to be more difficult and challenging but restricted by the fact that the target demographic can't possibly be interested in a difficult or challenging game. It's a sad realization that the game itself has to adhere to this kind of outdated thinking and while there are a number of interesting devices employed in Pac-Man and the Ghostly Adventures, the game ends up feeling squashed under the weight of such conflicted design.

The power ups, or Power Berries, don't feel fully realized and leave the player with a choice of two control methods, neither of which are ideal. In order to utilize these essential game items, the player's options are to either awkwardly hold the stylus while navigating the stage or dirty up the bottom screen with thumbprints. The actual pace with which Pac-Man maneuvers the game's levels is agonizingly slow despite the comical dust cloud he kicks up when running. The boss attacks are annoyingly cyclical and feel as though they're taken straight from classic platformers but not executed as well as their predecessors. Boss fights include repetitive steps like pushing a boss across a platform four separate times before death ensues, or chomping your way up a line of ghosts several times over just to get a chance to attack the final boss. There's a lack of skill involved in these boss fights that rewards the player simply for sticking it out long enough to actually beat the creature in question. Put everything together and you've got yourself a battle system that is underwhelming at best and downright frustrating at worst.

Additionally, the cutscenes within stages are imposing and numerous. Certain types of games can get away with a plethora of cutscenes, but in a platformer, the constant interruption of action is a huge burden. Each stage has somewhere between two and five cutscenes during the level and while there is a skip function available, implementing these cutscenes at all is unnecessary. Often, these scenes are to show off a new Power Berry, specifically for use at that exact point in the stage, however Pac-Man has already remedied the problem of passing along additional information to the player in the form of Hint Bells which would also serve the above purpose just fine.

However, not all of Pac-Man and the Ghostly Adventures leaves a bad aftertaste. There's homage paid to the original Pac-Man with the Time Tunnel level displaying the traditional blue bumpers and black background of the arcade classic. Other levels, like the Temple of Slime, are inspired and engaging thanks to the shifting camera and required use of various Power Berries. The Power Berries in general are a fantastic addition to the game. From the Chameleon Power Berry that gifts Pac a Gene Simmons-esque tongue to the Fire Power Berry that allows our yellow friend to turn into a mini Heat Miser in order to melt ice ghosts, Power Berries are essential to completing the stages and are generally just fun to use.

The writing is amusing with an easy to follow story and some chuckle-inducing puns that adults will appreciate. For instance, all Pacworld inhabitants have sphere-inspired names and there are such gems as Sir Cumfrence and President Spheros present in the game. The results screen is icing on the Pac-Man cake, with animations of him literally belching up all the points he consumed during the game, which is just plain funny no matter how old you are.

Pac-Man and the Ghostly Adventures tries very hard and the effort isn't entirely lost but it isn't really successful either. It's a decent game that could use some improvements, but just don't expect to be blown away by it.

Bottom Line: Pac-Man and the Ghostly Adventures gets an A for effort but a C for gameplay and mechanics.

Recommendation: Check this out if you need a game to satisfy an introductory platform player.

This review is based on the Nintendo 3DS version of the game.