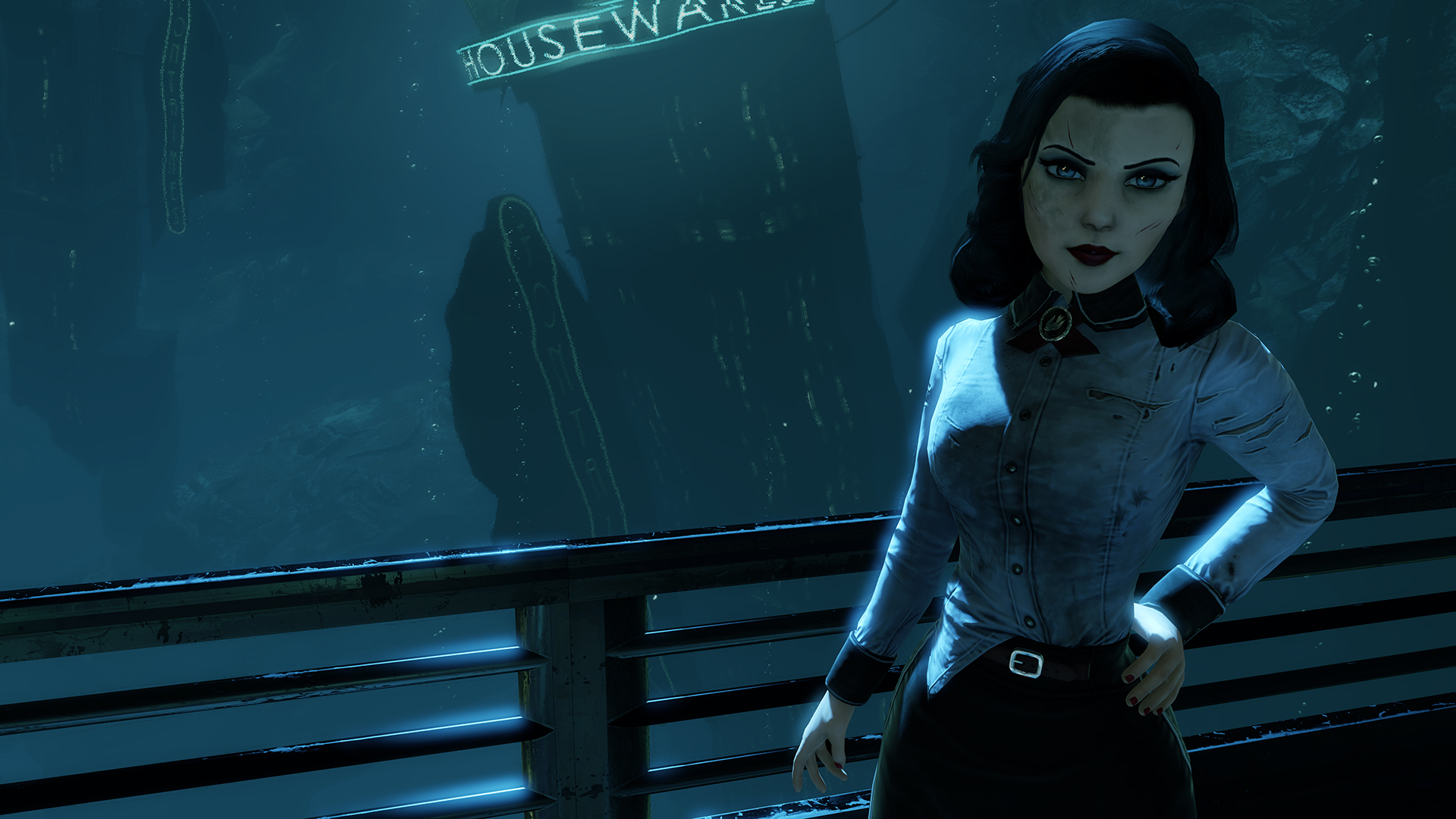 I'm going to start this off with a warning - BioShock Infinite: Burial at Sea is a tricky piece of DLC to talk about without touching on some of the major spoilers of the original game, so if you by any chance haven't finished Infinite just yet, you may want to do so before leaping into this review.

BioShock Infinite: Burial at Sea takes us back to BioShock's Rapture, where an alternate universe version of Booker Dewitt is working as a down-on-his-luck private investigator. A woman - a version of Elizabeth with dark eye shadow - comes looking for a missing girl named Sally, and despite Booker's insistence that she's dead, Elizabeth convinces him to head out into a pre-civil war Rapture to find her.

This sets up the first part of the game, which takes on an adventure style of gameplay where you explore a more pristine version of Rapture with Elizabeth while tracking down clues as to where Sally may be, and the one man who might know where she is - the infamous Sander Cohen from the original BioShock. While not the most engaging introduction to the game, it's really nifty to have the chance to see Rapture as an actual, living city before all the awfulness tore it apart, and to see people use plasmids for regular everyday work.

The second, combat-heavy part of Burial at Sea takes place in Fontaine's Station, a series of dilapidated buildings that have since been separated from the rest of Rapture and turned into a makeshift prison. Here's where fans of the original BioShock will feel the most nostalgic as you make your way through darkened corridors and past burst pipes, all while fighting off insane splicers that are around every corner. A few gameplay components from Infinite make an appearance in this section also, such as the skyhook (called air-grabber in Rapture, naturally) and its ability to let you travel along rails and hooks hanging from the ceiling, but there's not much opportunity to pull off the elaborate aerial stunts you could in Infinite.

The first few minutes of playing through Fontaine's Station almost feels like it has some survival horror elements. Ammo and EVE is limited, so you can burn through your resources very quickly if you're not careful and enemies will respawn in areas you think you've cleared. However, when Elizabeth reveals her reality-warping powers part way through, and starts summoning samurai warriors and gun turrets left and right, it turns the combat from tense, make-every-shot-count firefights to into something more mediocre and generic.

What harms Burial at Sea the most, though, is that it's really just too damn short. You'll be able to complete the DLC in approximately two hours, even if you do some exploration on the side to pick up some of the audio logs or new gear. The story is almost enough to carry it on its own (especially since it has one hell of a twist ending), but with the combat feeling lackluster at times the whole thing is too brief of an experience to really recommend.

Bottom Line: Burial At Sea tells an interesting tale with plenty of twists, but it doesn't have enough substance on the gameplay side of things to back it up.

Recommendation: If you're eager to revisit Rapture and see what it was like before everything went to hell, you'll enjoy the first episode of Burial at Sea, but chances are you're going to be frustrated by its brevity. It might be worth it to wait until both episodes of Burial at Sea are out before making the leap.

This review was based off of the PC version of the DLC.