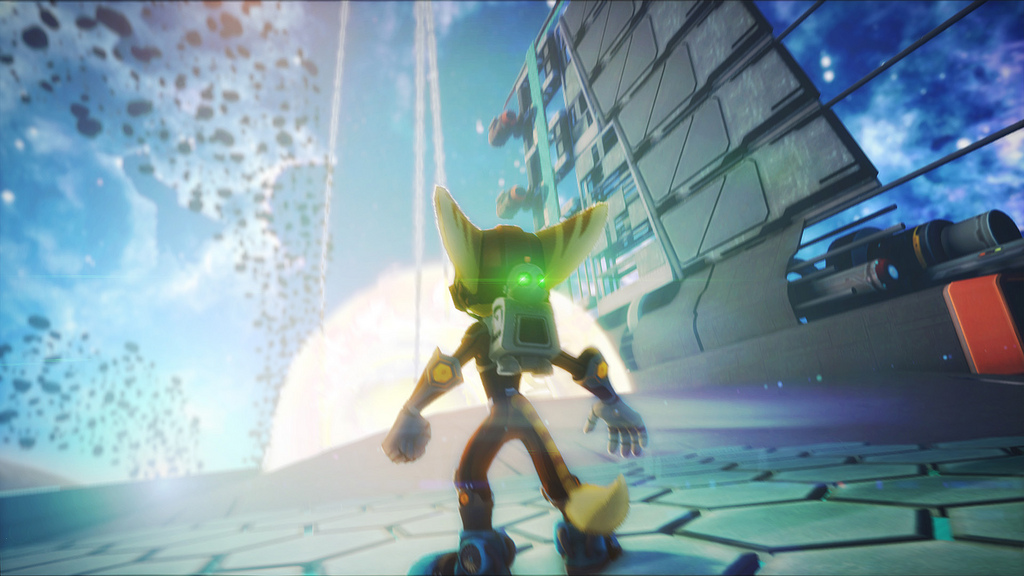 Insomniac and I have had a rough ride in recent years. It's a wonderful, wonderful studio - one of those companies that seem to "get" how videogames should be made, a studio that can craft a fascinating - and often adorable - world full of vibrancy and humor. Sadly, I've just not been feeling the same kind of love and craftsmanship from Insomniac lately.

Ratchet & Clank: All 4 One was a tepid squirt of disappointment, while FUSE came to represent everything wrong with the pre-packaged, focus-tested, cynically regurgitated console market. While I crossed my fingers for Insomniac's latest effort - its own swansong for this particular generation - I was worried that Ratchet & Clank: Into the Nexus would continue a chain of disappointment.

To my great relief, the team pulled it out of the hat with this one. The Lombax and his robot buddy are in fine form, delivering a fuss-free and quick-fire romp through the galaxy that rarely lets the pulse rate drop.

Into the Nexus caps off Ratchet and Clank's PlayStation 3 adventures, as our titular space heroes imprison the evil space witch Vendra and plan to make her answer for her crimes. Naturally, things go wrong fairly quickly, as Vendra escapes and plots to open a portal to a world of deadly interdimensional monsters. The plot is as lighthearted as you'd expect, but peppered with darker moments, and rich in silly humor. It's a brief game, at only a few hours, but the story keeps up an energetic pace that ought to satisfy Lombax fans.

Ratchet & Clank's formula hasn't dramatically changed over the years, and it really doesn't need to. An action-platformer of the most chaotic quality, Into the Nexus preserves the hectic run-and-gun combat that has kept the series alive for so long, with another arsenal of ludicrous weapons and kooky enemies upon which to use them. The regular grenade launchers and shotguns have been augmented with such weapons as the Netherbeast, which launches small demons from Vendra's dimension, and the Winterizer, which transforms enemies into snowmen while "Jingle Bells" charmingly plays over the action. My particular favorite is the Nightmare Box, a selection of jack-in-box projectiles containing demented ghouls that terrify and distract opponents. As always, these weapons can be leveled up to gain power, while Raritanium may be used to further upgrade them and add special abilities.

As always, a great pleasure comes from taking a mildly effective weapon and enhancing it until it becomes something utterly devastating. Nightmare Box ghouls are cute little distractions until you turn them into acid-spewing turrets of terror. Nether Blades toss out cute purple sawblades, but with a little leveling, they can become swirling, ricocheting walls of death. It's highly likely you won't get to enhance half of what you want in one session, but you can replay the game on a harder setting while keeping all of your weapons and enhancements, extending the playtime and ensuring you get to play with everything you want.

The majority of the game is spent blasting Thugs4Less mercenaries and slavering monstrosities from the Netherworld, constantly switching up the weaponry to gain experience and deal with frequent ammo depletion. There are the usual platforming elements sprinkled throughout the combat, with Ratchet gliding, jumping, and jetpacking his way through the environment. There are also a handful of fairly simple boss battles, and an obligatory arena for added violence.