Developed by Grounding Inc. Published by Microsoft. Released November 22 2013. Xbox One only. 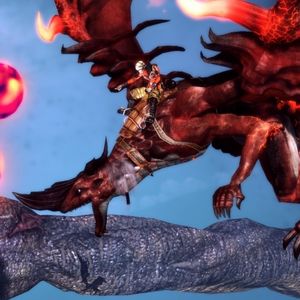 Playing Crimson Dragon was at first disappointing, then thrilling, then, finally, simply satisfying. It's a twitch game of quiet mastery. It doesn't quite make use of the Xbox One's full capacities, and can occasionally feel unpolished, but the final experience is a great homage - and worthy successor - to cult favorites Panzer Dragoon and Panzer Dragoon Orta. The game has a story - about humans who have colonized a planet dominated by titanic dragons and a dangerous, deadly virus - but like the story in previous Dragon-based rail shooters, it barely matters. You'll stop paying attention after a while, and replaying early levels makes the narrative all merge into a pile of mush. It doesn't matter, in the end because the gameplay steals the show.

In Crimson Dragon you move along a fixed route while still controlling where on the screen your dragon and rider move. Simultaneously, you independently target your attacks from what direction you're moving. It's not a common genre anymore, but that doesn't hurt it one bit. At any moment you'll be targeting enemies, remembering which of your attacks work well against them, firing your weapons, and dodging attacks in what can occasionally resemble a full-on "bullet hell" style game. It is a game of multitasking, you move your thumbs furiously back and forth - indeed, I found myself wanting access to every button on the controller, and adopted a claw posture with fingers on both the triggers and the shoulder buttons. This is a game of micromanagement and muscle memory - barrel rolling into a dodge as you slide your cursor across targets to lock onto them, then unleashing your barrage of fire.

That gameplay complete breaks down during the free flight mode segments. Suddenly you've got control of not only direction, but speed, and it's a switch that only works in some fights. The fights where you're maneuvering around a single massive boss in free flight work great. The fights where you're maneuvering around a swarm of large enemies, or attacking enemies on the ground? They're just not very fun. Thankfully, there aren't that many of them.

Level design throughout is fairly bland - but it's not really about visuals here. Some of the outdoor and jungle levels in particular, do a lot to make the game look good. Real level variety in rail shooters comes from how inventively enemies are thrown at you, and in what variations and patterns. In truth, the game does a good job of surprising you and giving you what you expect in good measure. Sadly, it wears on you after a while. There's just not enough variety of enemies through the game. You'll notice it in the first few levels, and then the enemy types will broaden out, but by your eighth or ninth hour with the game new enemies will stop appearing. Thankfully, the bosses are interesting and new throughout. Each boss level is like a fantastic breath of fresh air after the levels before it.

Crimson Dragon is hamstrung outside of gameplay by a few odd mechanics. Most everything you do costs money that you earn from doing missions - including starting missions themselves. It can leave you in odd situations like having to replay a lower level mission with your shiny new badass dragon because you spent all your money on the dragon and can't afford high level missions. 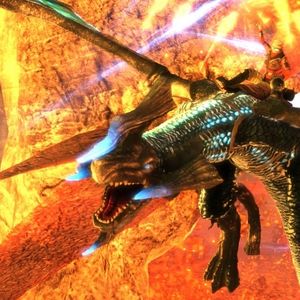 Encouraging you to replay low level missions to unlock higher level ones, specifically by killing certain amounts of enemies to collect "anti-bodies" from them, is something this game delights in. That will definitely appeal to the perfectionist twitch player of this type of game, where requiring mastery of levels in order to progress is seen as par for the course. Beginners, however, may at first be turned off by this type of play - and if you don't like score driven games, this definitely isn't for you. Similarly, much of the long term appeal of the game is unlocking new dragons and replaying earlier segments with different attacks, speed, health, and abilities.

Crimson Dragon is a worthy homage to an older genre, and if the game appeals to you as a $20 downloadable, then you won't lack for gameplay at that price. If only a few of the Xbox One launch games appeal to you, then . Just don't expect anything particularly "next-gen" about the game. The visuals are reminiscent of any given game from the end of the X360 or PS3's life cycle. This is an update to an old style of gameplay, but there's not a lot new here. There's a lot of old to love, though.

Bottom Line: While Crimson Dragon may lack a certain level of polish or depth, it's certainly above average.

Recommendation: If you like rail shooters, this is the best one in some time. Fans of the original Panzer Dragoon and Panzer Dragoon Orta should buy without a second thought.