Developed by Twisted Pixel. Published by Microsoft. Released November 22 2013. Available on Xbox One only. 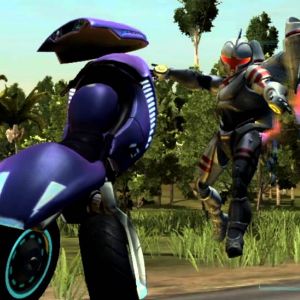 LocoCycle's narrative, told both in-game and through live action cinematics, is almost as silly as its title: Big Arms, a weapons manufacturing company, is showing off its latest armored sentient fighting motorcycles, IRIS (voiced by Lisa Foiles) and a chain-covered Harley named SPIKE (voiced by Robert Patrick), when a sudden lightning strike ends up wrecking IRIS' programming and inspires her to go on an adventure to Scottsburg, Indiana for a motorcycle rally - dragging poor Pablo, her mechanic (voiced by Freddy Rodriguez), along for the ride. If this all sounds like something you'd see in a B-Grade sci-fi movie, you'd be right - LocoCycle doesn't take itself seriously in the least, and almost revels in the utter absurdity of IRIS' quest to reach Indiana. While there's quite a few laughs to be had at some of the jokes and ludicrous situations, more than a few of the long-running gags - like IRIS' inability to understand Pablo's pleas for help in Spanish due to a broken translator - can get old awfully quick.

LocoCycle's gameplay is actually a mix of various different mechanics, ranging from button-spamming melee combat to rail shooter segments to quicktime events. Melee combat starts out mostly just by spamming your regular and heavy attacks (which involve throwing Pablo around like a discus), but soon evolves into a more enjoyable beat-em-up that includes the occasional counter-attack move while quickly switching from enemy to enemy. The ranged combat sections, on the other hand, feel the most lackluster, as they mostly involve holding down your fire button while lining up your shots until whatever target in front of you is dead, and don't feel as engaging as smacking a Big Arms agent around with your tires. 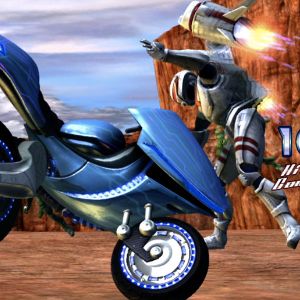 Overall, though, as varied and ridiculous as the gameplay can be (ridiculous being an understatement when you're going tire-to-rotor against a helicopter), it doesn't really draw you in as much as it feels like it should. Once you've dropped-kicked your twelfth jetpack wearing baddie in a long and elaborate, 100+ hit combo, you kind of feel like you're just going through the motions in order to get ahead and see what shenanigans happen next. While there are sections that utterly break away from the usual game play, such as a Mortal Kombat-style showdown between IRIS and Spike, they don't feel like they happen enough for a game that almost prides itself in its randomness.

After each section, you're giving a grade based on factors like your accuracy, and how many kills you pulled off. The grade you get determines how many XP you'll earn, which can then be used in-between levels to upgrade IRIS' various abilities. The upgrades vary from your standard health and damage boosts, to more unique abilities like reducing the damage you take when you crash into a car or granting Pablo the ability to repair you when your health gets low. The abilities you can purchase do add a level of customization to how you can play, but even if you score low on most sections, you'll earn more than enough XP to purchase the vast majority of upgrades before you hit the last few levels.

Bottom Line: LocoCycle has an utterly ridiculous story that will elicit a few laughs, but its gameplay isn't all that engaging.

Recommendation: If you like absurd, over the top games then you'll like LocoCycle, but once you've played through it once, you won't feel too incentivized to play through it a second time.