Developed by Housemarque. Published by SCEA. Released November 15 2013. PS4 only. 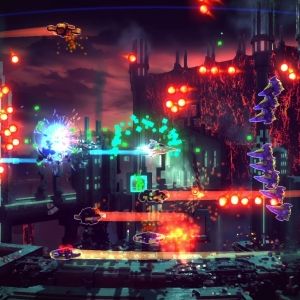 When the Xbox 360 was but a youthful babe, taking its first tentative steps into the world, one game that felt like a real must-have, at least in the downloadable sphere, was Geometry Wars. This colorful, highly stylized shooter brought a visual wow factor - and no small amount of challenge - in a way that helped define Xbox Live Arcade as a serious marketplace. In many ways, Resogun has done the same for the PlayStation 4.

It's hard not to draw comparisons between the two games. Both bear the hallmarks of classic arcade Shoot 'em Ups, both use their graphics in unique, surreal ways. Both are damn, damn good. Yes, Resogun is an excellent little arcade shooter, and has quickly found its place as the PlayStation 4's true must-have title.

In established SHMUP tradition, Resogun wastes little time with a detailed plot. You are a spaceship. You have to save the last humans. That's the only motivation you need to start blasting a variety of abstract alien entities while protecting little green men.

Not only does Resogun refuse to give you much plot, it also has little interest in explaining how it actually works. You get a brief overview of the basic controls - left stick to move, right stick to shoot, and shoulder buttons for special abilities - but you're given no clue as to the game's deeper complexities. Playing it for the first time, one feels thrown in at the deep end, and it's only through trial-and-error that one "gets" what the thing is about. In truth, the way the game is structured is deceptively simple, it's just so hectic and fast-paced that your brain needs to catch up with that's going on.

In some games, this kind of behavior is the mark of a bad game. It's a rare title that can turn trial-and-error gameplay into a selling point, but Resogun manages it. Its quick, intuitively controlled arcade combat is fast and fluid enough to where learning the deeper elements is an amusing revelation. Once you learn exactly why you keep losing humans, and why certain enemies are flagged in green, you naturally gain a deeper appreciation for the entire thing. Resogun's little revelations are an important part of the experience, so I respectfully decline the opportunity to lay it all out for you here.

At its most basic, Housemarque has given us a scrolling shooter, in which your ship of choice scrolls from left to right across a circular arena. As well as spouting bullets left and right, players get to use bombs, which wipe out everything on the screen, and an Overdrive ability, which pours a concentrated burst of devastating fire in a desired direction. Most crucially of all, one's ship can use a limited dash move that destroys enemies on contact, and gets the ship around the circular arena more quickly - a highly effective maneuver, especially when little green humans are being attacked and need your help.

Rescuing humans is an important facet of the experience, and it's one of the more obvious objectives. When humans are freed from their cubed prisons in the environment's background, they can be picked up and carried throughout the arena, or flung from the ship at the press of a button. The goal is to send them into green portals at the top of the stage, with each rescued human bestowing a bonus on the player -- be it extra lives, a temporary shield, or just more points. It can be tough to keep the humans alive long enough to rescue them, however - flying saucers try to abduct the little buggers, and sometimes they can just end up dead in their cages.

There a number of ships to choose from, each one handling slightly differently. One might have homing bullets, while another might boast more powerful Dash capabilities. It's highly recommended you try that homing ship first, the one named Nemesis, as it's a more viable starter than the deceptively balanced default. 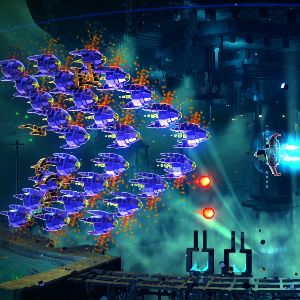 As well as a single-player mode, online co-op is supported. While it's fun to blast through levels alongside an allied ship, I've found that the online functions have a tendency to lag -- an absolute killer for such a twitchy game. I lost a life within seconds of starting an online game, because the response time just wasn't there in a game all about rapid response. It's nice that the feature was included, but I think I'd have rather had more solo content than an inefficient online offering.

I would have liked for Resogun to make more frequent and varied use of powerups - one of the staples of the SHMUP genre. While the odd item does spawn to upgrade weaponry, and the ship's special attacks recharge with time, it would have been cool to introduce a greater breadth of ammo types and fire modes. Without them, one's ship can feel a little too familiar over time, but at least the core combat is manic enough to ensure you'll never be truly bored with it.

Much has been made of Resogun's visuals, and with good reason! The voxel-based graphics are an excuse to throw hundreds of particles and cubes around the screen in colorful showers. Enemies explode into dozens of little elements, and entire levels blow apart into innumerable pieces at the end of every boss battle. Alongside the visual showcase, there's some great music and a delightful use of the DualShock 4's speaker functions, the controller itself barking orders and providing status updates.

Bottom Line: Resogun's pretty graphics and sometimes excessive effects make it look like a tech demo, but its refined action and subtle intricacies quickly put such notions to death. This is a thrilling and challenging shooter that just so happens to demo the tech quite well!

Recommendation: Do you have a PS4? Then yes. Get it.