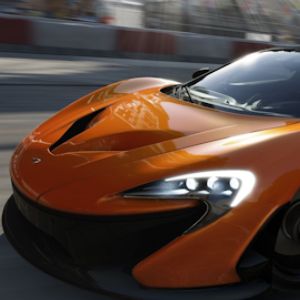 Alright, some fair warning: I'm not a racing simulation fan. I like classic and expensive cars well enough - not that I could ever afford one, but the appeal of a driving sim frankly eludes me. Though I'm sure some of the games I enjoy would be derided right back, to each their own and all that. I suspect however that many folks will be drawn in by Forza Motorsport 5. It's a gorgeous game that shows off the next-gen console, and it's one of the few exclusives being released at launch. Maybe you're jumping, like me, into this kind of game for the first time, but if you're looking for an in-depth review of driving mechanics, you may want to look elsewhere.

Graphically the game looks good - stunning, in fact. It's easily the best looking launch title on the Xbox One, and may even look better than the PlayStation 4's current offerings. The cars themselves are detailed recreations of their real-life counterparts, and there's a whole mode dedicated to walking around the car - getting in and out and examining them up-close for some shameless car porn glory. If you've ever wanted to know what the interior of some stupidly-expensive track car looks like, now you can, and even to a layman like me there are some really impressive automobiles on display. Even subtle elements, such as light playing off vehicles or grit on the racetrack, are meticulous in their detail.

As you leave the race courses themselves, the game still looks really great, though it uses a bit of motion blur and some other tricks to keep up graphical fidelity. Holding the 1080p and 60 fps is ultimately key, especially the framerate. Outside of the cars and track, it's really the draw distance and overall environments that are most important, and driving around cities like Prague is a visual pleasure. Though the little touches like a helicopter flying around or a camera mounted on a boom over the track give it just that extra nudge of realism. 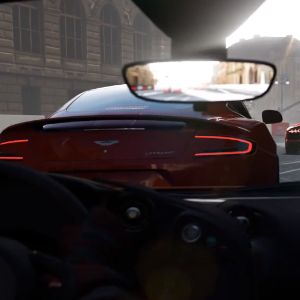 Realism is certainly at the core of the game here, influencing everything from basic gameplay to scoring and difficulty. Racing is broken up into leagues, with each league representing a specific class of cars and a series of races - this is so you're not racing a souped up sedan versus some speed demon that even ditches a windshield to keep the weight down. In addition to the normal events, there are a few challenge races that will occasionally - and thankfully - break up the action. These vary from contending with slower cars or trying to knock down pins to score points. Each race also lets you set your overall opponent's difficulty; we'll get to that more later, and also your assists.

Assists are a series of gameplay functions that make the game easier, like automatically applying the right brake pressure for a corner, making damage cosmetic only or drawing the optimum path on the track, among others. There's even a Rewind function during the game that lets you redo that corner you just botched at the cost of a few percentages off your final reward - gone is the need to restart the whole race. The less you rely on these helpful features, the more you're rewarded, which naturally makes you want to slowly turn them off and see what new aspect you can learn. As someone new to this genre, I found this a great way to introduce new players, though I feel like there could be some more explanation of what to do when you start taking off the training wheels. Understanding that my car is more likely to spin out with a certain feature disabled doesn't particularly teach me the skills to compensate for it.

Winning races will give you credits, which are used to buy new cars and purchase upgrades for them. You'll also earn experience and affinity. Affinity earns you additional rewards for driving a specific manufacturer's brand of cars. So if you really like say Ford Mustangs, you can more easily earn them all by choosing to drive Fords exclusively. There's a fair bit of bragging rights and other competition woven in throughout the game too, even when you're not online. Rivals will constantly test you to try and best another person's lap time, working in more challenges and goals than simply finishing the current race. There's also a ridiculously extensive paint system for designing cars. Between decals and various coats of paint its easy to get lost in all the options, but if you invest the time you can create some really creative and unique looks for your ride, and maybe even see other folks use them as well. 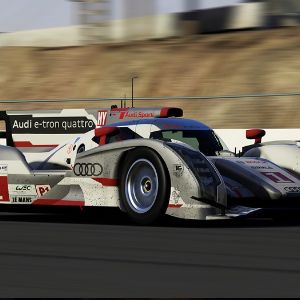 The major feature behind Forza Motorsport 5, and showing off the Xbox One server cloud, is the new Drivatar system. The basic premise is pretty simple; there are no AI controlled cars. That's perhaps a slight bending of the truth, but the facts are no less interesting. As you drive in the game, Forza analyzes your habits and tendencies. Do you always try to pass on the outside or inside, how tight do you hug the corner, etc. It uses this to build your Drivatar, which in turn gets seeded out for everyone else to race against. There are "no AIs" to the extent that no cars are driven by preprogrammed sequences but instead by generated behaviors from other players. Your Drivatar will even earn credits for you while you're away from the game by participating in races, and it's interesting to imagine my aggressively passing on the inside and bumper using Drivatar is invading other people's games. Frankly though, I have no way of knowing how well this system actually works. I'm sure that dedicated fans might recognize their friends' driving habits not unlike someone I know might expect me to take a certain class in MMOs, but I just don't have the skills to know if those other cars are behaving like standard AI or like real players.

One aspect that I did find odd, even as an outside observer, was that there's only 200 cars and 14 tracks. A casual search turns up that Forza Motorsport 4 started with 500 cars and 27 tracks. Certainly more cars will be released through DLC, but it just seems a little on the anemic side to start, especially for the race courses. You're going to see the same stretches of roads, corners and turns a lot as you invest hours into this game. I wonder how much the developers had to balance between graphical fidelity and diversity, and if they needle should have been shifted more towards the latter.

Ultimately Forza Motorsport 5 is an experience built up around these cars, often legends in and of themselves. From the gorgeous detailed car models to the Top Gear narrated introductions to the cars themselves, it's honestly a little infectious and I understand more about why these driving sims exist after playing. Driving doesn't just need to be a chore.

Bottom line: It's quite possibly the best looking next-gen title. Hardcore fans will enjoy it to its full extent, but it's fairly forgiving to newcomers as well. There's just not a ton of middle ground, you'll either really love it or not be interested at all.

Recommendation: If you like realistic race simulations, this is the game for you.