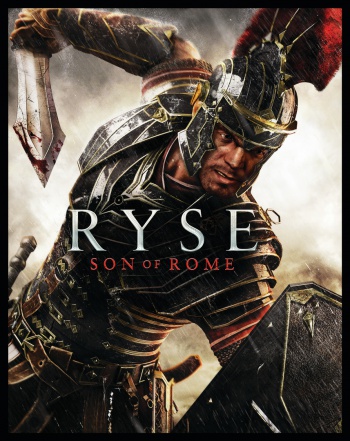 Vengeance is a tried and true plot device, driving people to maddening extremes to achieve their goals. Even otherwise relatable characters can do dastardly things in the name of revenge without losing the goodwill the audience developed for them at the moment of tragedy. This is nothing new in videogames, certainly, but the appropriateness of the Roman era for this kind of epic tale and gruesome violence is undeniable, making Ryse: Son of Rome a shining example of how to rehash a clichéd plot into something exciting.

The campaign in Ryse follows the life of Marius, a Roman warrior whose family was slaughtered, leaving him hell bent on revenge. You'll see (and play through) young Marius in combat training with his father, a renowned Roman warrior. You'll get to experience his rise through the ranks of the Roman army, proving himself a nigh-unstoppable killing machine and fearless leader of lesser men. There are a couple of minor twists in the story, so it's not entirely straightforward, but nothing in the campaign is exactly groundbreaking on the storytelling side. That said, it is told exceedingly well with well-voiced narration and some really solid acting on the part of the motion capture actors for a plethora of cut-scene characters. The whole cast does a great job of keeping you immersed in the story, and the seamless flow from cut-scene to gameplay aids your emotional investment, even when you're not actively pressing buttons.

The one major problem with the story, however, is that the campaign lasts only 6-8 hours, depending on how often you get yourself killed. The story and characters are engrossing enough that you won't want it to end, but by the time you really get a firm grasp on how to play, you've finished the entirety of the campaign. Sure, you can always crank up the difficulty and play through it again, but there aren't branching story paths to take, so you won't see anything new. For what amounts to a story-driven action adventure game, the brevity of Ryse's campaign is a serious mark against it.

As for multiplayer, there is an arena mode on offer, with two-player online co-op and solo options available. Upon entering the arena, you'll try to accomplish as many objectives as possible before dying a horrible death. Arena battles seem to be a little more chaotic than the encounters during the campaign, with eight or ten combatants simultaneously trying to murder you. It's a great way to hone your blocking, slashing, and execution skills, and the variety of arenas and objectives will provide at least a couple solid hours of entertainment. Given how much fun the combat is in Ryse, it's no wonder the combat-focused arena is such a blast to play, at least for a while. You can also customize your gladiator by buying Booster Packs, containing new equipment, with gold. You can earn gold in the arena or purchase it via microtransactions. This will definitely leave a bad taste in your mouth, as the gold acquired through play is paltry compared to what is required to purchase booster packs, so folks willing to shell out some additional cash will have easy access to upgrades, whereas players farming gold will have to work endlessly for it. 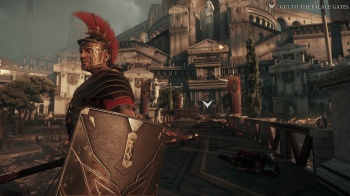 The combat system is nearly perfect in its simplicity. You've got four basic actions: slash, bash, block, and roll. Combat is hectic, but not overwhelming, so you almost always feel in control of what's going on. Even when you're facing down four or five enemies, as long as you're willing to press the block button frequently, you'll keep yourself in the action. If an opponent is directly behind you, pressing block at the right time will automatically turn you to face their attack, making for some very impressive looking combat antics. Once you've whittled down an enemy's life, a small skull will appear over their head indicating that it's time to press RT for an execution.
Executions are where Ryse got a lot of flak from the gaming masses, as they look a lot like quick-time events, with the characters glowing different colors depending on which button you're supposed to press. That's where the QTE comparison ends, though, as the execution will happen regardless of what buttons you press. You're awarded bonus points for hitting the right buttons at the right time, but there is no penalty for failure, which is really key for folks less fond of QTEs in general. The execution system is grisly to say the least, featuring graphic scenes of dismemberment, throat slitting, and head stomping. That's half the fun, though, as you'll get serious satisfaction out of executing a difficult foe after a grueling battle. Enemies also don't attack you during an execution, so you won't get cut down in the middle of a lengthy animation.

Ryse can be challenging in places, but there are systems within the game to prevent it from becoming excessively frustrating, namely the execution bonus. You can switch between the four bonuses - health regain, bonus damage, bonus experience, and focus regain - at any point with the D-pad, but you'll probably find yourself using health regain almost exclusively, since it's the only one that will actually keep you in the fray. That's not to say the game is without frustration, though, as some of the boss fights are incredibly tedious experiences. Unless you've perfected your block timing, you'll have to dodge many of the boss attacks, which only opens them up for one or two hits. This makes for some lengthy slogs of little more than dodge, slash, repeat. Likewise, the Kinect voice commands, while not technically required, get to be particularly dull after a stretch. Yelling "Archers, cover me!" at your Xbox over and over again not only gets tired, but it makes you feel kind of silly, rather than the hard-as-nails badass that you're supposed to feel like while playing. If you don't want to use voice commands, the controller alternative requires you to hold LB for several seconds, which isn't always feasible in the heat of combat. Given how amazing the general combat experience is, the tedium of boss fights and the silliness of yelling the same orders repeatedly is a pretty serious letdown. 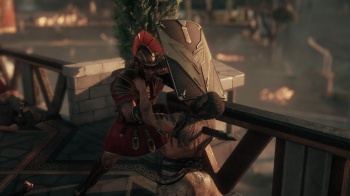 Having been developed by Crytek using CryEngine, it's no wonder that the graphics genuinely portray next-gen capabilities. The characters are immaculately animated, with an uncanny ability to portray complex emotions with nothing more than facial expressions. The dialogue is good enough to be worth paying attention to, but the graphics are what really bring out the essence of the characters. Recognizing sheer terror on the face of a character in a game is a really thrilling step forward for the medium.

Ryse: Son of Rome tells its story well. It has amazingly enjoyable and ruthlessly violent combat, which pairs incredibly well with the stellar graphics quality. Sadly, the experience is over all too quickly, and you'll be left wondering where the rest of your game is. You might find that in the arena, if your focus is on multiplayer and/or challenge modes, but if you were hoping for an epic tale of heroism, you'll have to settle yourself for a short story.

Bottom Line: Ryse: Son of Rome is a wonderful experience. The simple, yet always dynamic combat is how it really sinks its teeth into you. By the time you really get hooked, though, the game will be over, and you'll be left wanting more.

Recommendation: You should definitely play Ryse, but you might do well to wait for a Black Friday or post-Christmas sale before you scoop it up, since the brevity of the campaign really hurts the dollar-per-hour value of the title.