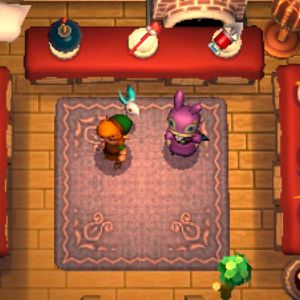 When it comes to fishing for nostalgia, there are few companies more accomplished than Nintendo. Be it with subtle nods or a full-scale homage, Nintendo knows exactly how to tug at the heartstrings of veteran gamers, a skill that has kept its fanbase loyal even as it chased children and the elderly just a few short years ago.

The Legend of Zelda: A Link Between Worlds is a perfect example of just how shameless Nintendo can be. The game exists almost entirely to nudge you in the side and say, "Eh? Eh? Remember this?" As a spiritual successor to the SNES classic, A Link to the Past, this latest trip to Hyrule makes its intentions clear from the very start. Its opening sequence plays out almost exactly like its SNES ancestor, with Link awaking alone in his house -- a house situated on an overworld map identical to the 1991 adventure. It only develops from there - Majora's Mask is displayed prominently on Link's wall, character designs evoke memories of Ocarina of Time, and the soundtrack is constructed of classic Zelda series tunes. With surgical precision, Between Worlds has been built to please its audience on the most wistful of levels. I'd be tempted to call it cynical, if it wasn't so damn good at it.

It also helps that, for all its retro-oriented whimsy, A Link Between Worlds goes the extra mile in providing fresh and surprising ideas. While the map of Hyrule is identical to A Link to the Past's, dungeons have been newly built from the ground up. The art style, too, has been revamped in a gorgeous new way. While some fans have been unsure of the 3D character models, all doubts will likely melt away once they get their hands on the game and see it in motion - screenshots do no justice to this game's gorgeously fluid animations and incredible lighting effects. 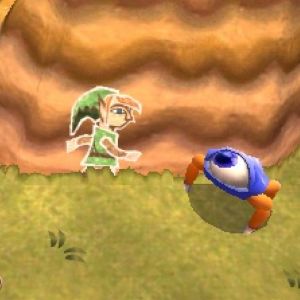 Much of the game is spent in a classic top-down Zelda mode, with players going from dungeon to dungeon, hacking and slashing at Ganon's beasties while collecting sacred items. Between Worlds' most significant new concept, however, is Link's ability to become a 2D painting, plastering himself onto walls in order to reach areas a fully-3D Link can't. At its simplest, this could involve shifting onto a wall to get through a window with iron bars, snaking around the window's frame and onto the building's exterior. Naturally, the game's puzzles exploit the feature in increasingly complex and clever ways, consistently delivering new methods of using an outwardly shallow idea.

The usual Zelda routine has also been shaken up thanks to Ravio, a sneaky merchant who upends the familiar formula of item acquisition. In most Zelda adventures, players gradually gain new equipment as they clear dungeons, picking up their obligatory bows, boomerangs, bombs and hookshots as needed. In Between Worlds, Link encounters a bunny-eared lender who runs an item rental business and loans the use of almost every important item from the outset, provided players have the Rupees to spend. It's an interesting idea that changes the pace of the adventure, but I have to confess that I don't like it.

For one thing, having access to items from the start means that, if you are unwilling or unable to rent the entire inventory at once, you're going to have to guess what you might need. Will you be traveling to an area that requires the hookshot? Will that Ice Wand be in use? You don't know until you get there. Even more annoyingly, rentals last until Link falls in battle - if you run out of health, Ravio's little bird-thing sidekick will pilfer everything you have, and you'll have to stop what you're doing, return to Ravio, and rent all the stuff again. It's an annoying hindrance that adds nothing to the game and only serves to waste time. Eventually, you'll gain the option to buy equipment outright, but at 800 Rupees an item, you'll be farming for a lot of cash.

Thankfully, weather vanes are dotted around Hyrule, allowing Link to fast travel between them. This cuts down on time considerably, but does little to reduce the annoyance of having to leave a dungeon and reequip their gear, for no justifiable gameplay reason.

Also, Ravio's a really annoying little prick, and this is coming from someone who likes Tingle. 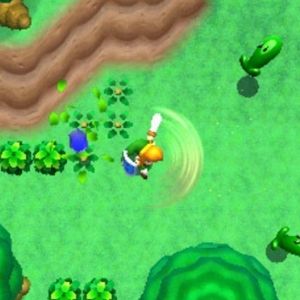 A Link Between Worlds attempts to play for time in other ways, too. Partway through the game, Link enters this game's version of The Dark World - Lorule - through cracks in Hyrule's worlds. Lorule, however, is sectioned off in such a way that all the major regions are accessible only via their own separate cracks - cue a tedious little hunt as players backtrack through the entire world map to find fissures through which to travel. Some of the dungeons, too, are designed to encourage lost wandering around more than challenge with obstacles.

When it's not trying to waste the player's time, A Link Between Worlds is a satisfying little adventure. I've probably played A Link to the Past more than any other Zelda game, and this spiritual successor delights with its references, nods, and faithful gameplay elements. Smacking down crows as they swoop from the trees, or dodging the fireballs of river-bound Zoras, is as amusing as ever, and the charming graphical overhauls only serves to further enchant.

Between Worlds is one of those games where I'd recommend utilizing the 3DS' 3D settings - if your eyes can handle it. Not only does the game benefit from the sense of depth, some of the multi-level dungeons are a lot easier to navigate with the added perspective. The game is not terrible or unwieldy when played in two dimensions, but this is one of those 3DS games where the 3D truly feels like it adds something of note. At its most basic, the 3D helps make games "pop" more, and this is a gorgeous enough game to truly deserve a little popping!

While a fun little game, there's no denying that Nintendo is really relying on its evocative past to keep the experience appealing. Without the constant nods to previous installments, without that classic Zelda flavor, Between Worlds is a fairly standard action-adventure title with a few neat gimmicks. It's a beautifully presented one, and it's a damn good time, but it's also got its fair share of irritations and erects meaningless roadblocks for no other reason than to seemingly pad itself out. Still, I cannot claim that referencing previous triumphs for cheap applause doesn't work - it works very well, and A Link Between Worlds is damn good at it.

Bottom Line: The Legend of Zelda: A Link Between Worlds is a sentimental game that skates off its predecessor's successes, but is so good at doing so one hardly minds. A few neat new tricks and a beautiful visual style help make up for the game's more frustrating hurdles.

Recommendation: Provided you don't go in expecting the next epic Zelda installment, you'll likely not regret picking this one up.