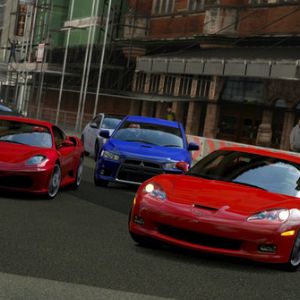 One of my earliest experiences in gaming was playing Gran Turismo 3 with my roommate. We played the game as a team and would take turns or shifts on the endurance races. It was some serious fun. Going through the different gear ratios to make my car the fastest on the track required an attention to detail that I wouldn't normally appreciate in a game, but proved to make Gran Turismo even more immersive. Now with the release of Gran Turismo 6 we're given an even better look at the cars and tracks that have made the earlier games so much fun and some more that will put you on the edge of your seat. .

Polyphony has built a reputation around realism which they've kept alive for yet another iteration. After racing for a while, the controller starts to feel like an extension of you. You can physically feel when you lose traction and are about to spin out so much so that you could almost play the game without a television. They've taken their mission of putting you behind the wheel and added to it, making the game even more immersive. There are some similarities to other driving sims, which you can't really avoid for this genre, but they make a point of letting you decide just how involved you are with the controls.

If you're a basic driver you can just rely on the accelerator and brake, but if you feel the need to be reckless, you can dabble with e-brake turns and other more reckless moves in order to win. To make the game even more realistic you can always turn your automatic into a manual and enjoy the driving on an entirely different level, taking you into a more strategic game of racing as you downshift to give your car just enough power to overtake another car in an intense race. We all know games that are built around the e-brake and its overuse. Games like Burnout and Need For Speed are made for you to drift around a turn and run into other cars, hopefully causing a car to crash or run off the road. That's what separates this game from "racing" games that are basically reckless driving sims.

In Gran Turismo 6 you aren't bound to this little blue marble floating around the sun, as you're given a chance to hop to the moon for a quick romp. You can take the wheel of the Lunar Rover and "race" along the Hadley Rille with a max speed of seventeen miles an hour. Weightlessness is a remarkably odd experience to have in a driving sim. In addition to roving on the moon, GT6 also brings the Goodwood Festival of Speed to the game. This is based on an actual event that takes place on a 1.16 mile strip of road that runs through the grounds of the Earl of March's family home, in scenic West Sussex, England. The Festival of Speed was introduced in 1993 and features historic cars, like the 1970 Porsche 917 or the more modern McLaren MP4-12C, making the trek over the 1.16 miles of a hill climb. Taking a rare Ferrari out to play on this course may well be the most fun you have with this game.. The way that the vehicles can weave through the twists and turns makes the Goodwood Festival a definite highlight. 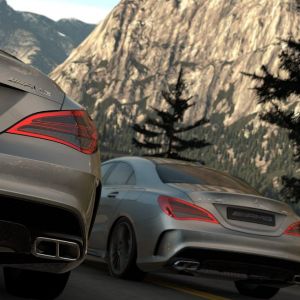 Now, besides the usual plethora of races and types of races, you're given mini-games. Coffee Break challenges allow you to let loose and use that e-brake that is normally just a button that would kill your chances in an actual race. You get the opportunity to just knock down cones in a very ridiculous manner, whipping your car to and fro hoping to knock down as many as possible within the time limit. Getting you off of that high and lofty racing pedestal that they put you on when introducing you to the game is a great way to knock you off balance, and lets you relax with the challenges. You'll enjoy the racing more when you're able to enjoy a bit of wackiness, because nothing can get at the nerves more than hours of sitting on the edge of your seat trying to maneuver a Honda Fit around a track at very unsafe speeds.

You can't help but notice the prevalence of microtransactions in modern gaming, and Gran Turismo 6 is no exception. Players are able to purchase in game money from the PSN store. This may make online play a little off balanced, but overall if you're playing through in single player career mode this could help you progress without having to wade through all of the races. On the other hand, this can take away from that satisfaction you get for actually earning that money. If you make the early races obsolete, you're missing out on half of the fun of earning a win with a family sedan, rather than just jumping to some of the better cars available to you.

This game is as good as the series has ever been. The franchise is almost always a safe bet and they won't let anyone down with this installment. Gran Turismo 6 doesn't really introduce anything too new, but it will give you little snippets of fun to offset the tension that can accrue over hours of playing a serious racing game where every turn could make or break the race.

Bottom Line: More of a driving sim and less of a racing game, Gran Turismo 6 is the cream of the crop. It's an easy game to hop into for a single race or plant yourself in front of for hours on end. They've added some interesting features but at its heart it hasn't changed much from the last release.

Recommendation: If you love racing games this is a must buy. Gran Turismo has been steadily improving, so it's no surprise that this iteration is one of the best.