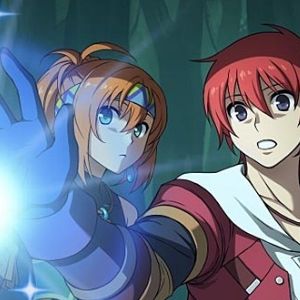 When the Vita was first introduced, a good deal of the hubbub surrounding it involved its dual analog sticks and potential as an engine for portable first person shooters. The years since its launch have, in turn, seen several contenders try and fail to fulfill the promise of FPS-action on-the-go while, in the mean time, the platform has quietly built up a library of role-playing titles that's arguably the best any modern handheld can offer. Persona 4: Golden, Disgaea 3, Soul Sacrifice, Muramasa Rebirth, Dragon's Crown; it's a platter of games both meaty and diverse enough to keep most any fan of RPGs content.

Stepping onto that already sturdy foundation is YS: Memories of Celceta, an action-RPG that, despite some minor issues, delivers an experience that's thoroughly enjoyable. The game begins, as so many RPGs do, with a case of amnesia. Adol Christin, the franchise's long running protagonist, returns from the titular forest of Celceta with his memories wiped away. Despite this setback, the fact that he even survived the notoriously lethal forest is enough to impress the local government into hiring him to map Celceta while he searches for his lost memories.

And you will, very literally, search for his memories. Rather than having him completely recover from his amnesia via some convenient plot point, Adol's memories are collectible items that you'll find scattered throughout the forest. Finding a memory is always a welcome occurrence because it raises your stats. Sadly, the vignettes contained in each memory are usually little more than dull conversations or flashbacks that ironically are kind of forgettable. The story as a whole suffers from that. None of it's especially bad and it will make you chuckle with some well written jokes and dialogue, but overall it's nothing ground breaking and boils down to little more than an excuse to explore the forest and do some dungeon diving. 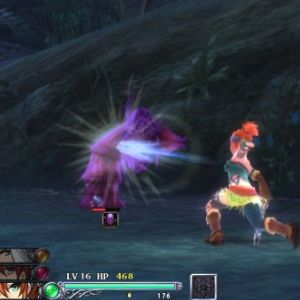 The forest itself is, to the game's credit, delightful to explore. It manages to capture that much sought feeling of "just a little more" and couples it with hack and slash mechanics that are a ton of fun but also deceptively deep. While you'll be able to beat some monsters with simple button mashing, there's no lack of enemies with differing physiques that can essentially nullify your attacks. For instance, Adol might be able to slash his way through a pack of soft-bodied monsters, but put him up against a hard shelled monster and you'll find his damage potential stunted to the point of impotence. Victory becomes less about plowing through your foes and more about knowing which of your party members' equipment set is best suited to take down the enemies at hand.

The game, in turn, includes a robust crafting system to help make sure your characters are carrying the best of the best when they head into the woods. Crafting is another element of the game that seems simple on the surface but actually contains some real depth for more dedicated players to chew on. Throughout the forest you'll find materials that can be used to improve your weapons and armor. On a base level these upgrades offer damage and defense bonuses. That said, many of the resources you collect come with extra element and status affects that you can mix, match and apply to your weapons for some added oomph.

Said oomph comes in handy because combat in Memories of Celceta is fairly constant, sometimes to the point of being problematic. To be sure, the game's fighting is a lot of fun. Slashing through a swarm of baddies or dodging out of the way of some larger monster's pummeling blow is as much of a joy at the game's end as it at its opening. That said, even the best thrill rides get old if you don't have any breathing room. Thankfully the game does take some steps to keep things from ever becoming truly tedious. You'll take on quests, for instance, that make an effort to expand beyond the typical "go here and kill 10 of this" objectives that a lot RPGs rely on. Those are still present, but they're mixed in with more off-kilter missions like taking over a merchant's shop for a day or milking an elusive monster. In practice, these aren't all that long-lived and often don't even require much actual work, but they're frequently amusing and provide some welcome reprieves to space out of the innumerable hack and slash sessions. 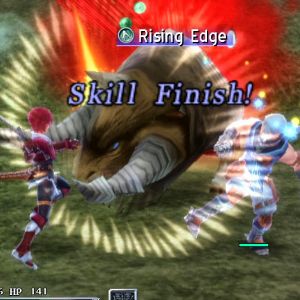 The game's dungeons, though also combat-centric, similarly offer some nice variety in the way of puzzles and bosses that you'll need to solve and defeat. You generally won't encounter anything too complicated - one early dungeon featured a giant pit you had to gradually flood to reach a high up staircase - but they're more structured than the forest and provide some welcome goals to contrast the free-for-all exploration that defines the rest of the game. The bosses, in turn, take the combat to new levels of interest by challenging you with attacks and patterns leagues more complex than what the standard motley of monsters packs in its arsenal.

Sadly, the dungeons also expose one of the game's bigger problems: its camera. Running contrary to most recent standards, Memories of Celceta's camera is fixed. You can zoom in and out with the Vita's touch screen, but you otherwise can't move it. It's an odd choice, especially since the right analog stick doesn't have anything else mapped to it and could have easily been used to offer some rotation options. The game frequently positions the camera so that it can be easy to miss things like exits, corridors and treasure chests lying in the screen's periphery. It does boast a map that you can view whenever you feel like it, but it's still too easy to get lost.

That's hardly a game breaker however and, if you're a fan of RPGs, you'd be a fool to pass up on YS: Memories of Celceta just based on that. As it stands, this isn't the best RPG on the Vita. That said, it's a damn fine one and one of the better games on the system. If you're a fan of the YS series or even just a role-playing aficionado looking for something new to do with your Vita, you'd be hard-pressed to find a better new game this holiday season.

Bottom Line: YS: Memories of Celceta is a great action RPG and one of the most entertaining games on the Vita. It perhaps stumbles in a few places but never enough to fully fall.

Recommendation: RPG devotees and hack and slash fans will enjoy its skillful combination of exploration, combat and customization.