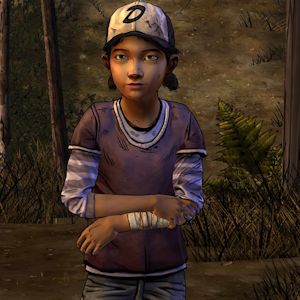 TellTale Games' The Walking Dead was one of the most affecting pieces of interactive software I've ever had the pleasure (and sorrow) of playing. The word "emotional" has been overused in game criticism to the point of banality, but the wide range of feelings TellTale evoked from me - fear, amusement, relief, total despair - is a testament to the nuance and sensitivity of the studio's enviable writing talent.

Naturally, the Season Two premier episode had a damn tough act to follow. 400 Days was a nice buffer, but this is the center stage, and TellTale has to tread a fine line between maintaining our high expectations without desperately relying on shock value or mawkishness in an attempt to make lightning strike twice. It is with great pleasure (and the customary sadness that a truly effective Walking Dead episode evokes) that I confirm TellTale Games has not missed a step.

Following the tragic events of Season One, Clementine takes the lead as the player character. Though matured and hardened by her experiences thus far, she is still a little girl, and the difference is keenly felt. Smaller and nowhere near as handy in a fight as Lee, players will feel the sting of inability as they find shelves too high to reach, and they'll learn to fear unknown adult survivors in ways they never did before. The switch from adult to child is a jarring, almost disempowering one, but it's startlingly effective at making the player feel truly ill at ease.

Make no mistake - Clem may not be able to throw a punch like Lee, but she's far from weak as the lead role. A wonderful job has been done in making Clementine's growth into a more cynical and capable character credible, and as players evade trouble and desperately fend off the obligatory "walker" attacks, they'll find she uses all she has to put up an impressive fight. It's an immeasurably tough thing, to write a vulnerable child protagonist who isn't incapable, but here it's been pulled off with something resembling effortlessness.

Interactions remain largely the same as before, with objects and scenery highlighted onscreen, and manipulated with a simple click of a button. Once more, dialog plays a big part of the adventure, with players having to quickly choose from a number of answers that supporting cast members will remember in future installments. Being a season premier, All That Remains plays it fairly light in terms of offering agonizing choices, but there still manages to be a number of shocking, even harrowing, scenes that will unnerve the squeamish and easily disturbed. 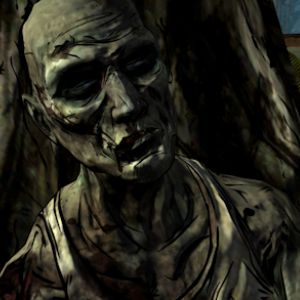 One new addition to the game is a more "classic" take on quick-time-events. As well as the usual moments of button-mashing struggles and quick-targeting attacks, players will engage in chase sequences that require directional buttons to be pressed swiftly in order to avoid obstacles or opponents. These sequences allow The Walking Dead to appear more like a Quantic Dream game than ever, albeit with the extra bonus of having a well-written story and believable characters. Those who find QTEs unforgivable will doubtless be unimpressed by their further inclusion. I, personally, don't mind their implementation in this particular case.

The user interface has been given a cosmetic overhaul, and I'm not too fond of the new box-like dialog options. They're a touch more overbearing and garish compared to the smaller, more subtle text options found in Episode One. However, the button prompts for "struggle" sequences are more stylish looking.

A narrative-driven game that draws the majority of its effectiveness from surprise is difficult to review, naturally, as spoilers must be carefully avoided. I will say that All That Remains is as beautifully constructed as anything found in Season One, to the point where it subverts expectations almost as soon as it sets them. Without going into too fine detail, the game quickly sets up Clementine with a new acquaintance, someone she can play off of, included in such a way that I feared a predictable and stereotypical relationship was about to unfold.

I could not have been more wrong.

What TellTale Games pulls with this particular character interaction is indicative of the kind of fresh narrative approach that earned it such critical acclaim in Season One. If that's the opening gambit, I relish upcoming installments with both excitement and abject fear.

Retaining the comic book visuals of the previous season, the game looks lovely as ever, with delightfully relatable facial animations - proving once again that you don't need photorealism to have an "emotional" experience. That said, the familiar framerate and stutter issues that plagued previous installments are all in abundance here, too. At least the voice acting is top notch, and the soundtrack is utterly beautiful - proving already to be even better than the first set of episodes' powerful tunes.

The Walking Dead Season Two: All That Remains has quickly put to bed any worries I had that TellTale would be unable to pull off the same stunt twice. Written with a maturity, intelligence, and above all, restraint, the season opener packs its punches with frighteningly effective precision, and delivers exactly the kind of memorable, beautifully distressing content fans of the first series will have come to expect.

Bottom Line: Season One was like tossing your soul into a thresher. If All That Remains is anything to go by, this second season will burn the very heart of you.

Recommendation: Yeah, get it, for crying out loud.