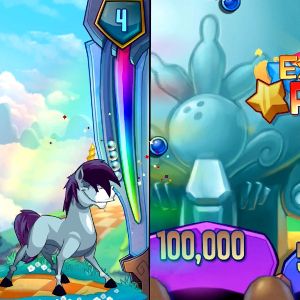 I am a former Peggle addict. This isn't something I tell a lot of my friends for one of two reasons. First, many of them are the kind of core gamers that scoff at anything without 32,000 hours of multiplayer and at least as many unlockable doodads buried somewhere in the code. The second is shallower, but I also think it damages my image a bit. I love my strategy games, my obtuse PC western RPGs and my complex simulation... everything. Peggle, and now it's flashy, borderline acid trip of a sequel, are guilty pleasures because beneath their casual gaming shell hides dangerous concentrations of distilled fun.

As prolific as it seems to be, Peggle is a remarkably hard series to describe. It's an unfamiliar assortment of a staggering number of elements that, when separated seem obnoxious and cliché. It constantly tells you how much skill you need to pull of the really awesome shots, but it can often leave you feeling helpless and at the mercy of luck. Certain moments that PopCap have deemed worth have bombastic musical cues based on some of the famous clips of classical music around. Characters are pumped to critical pressure with adorable features, topical wit and colors that until a few days ago, I didn't even know existed. It's a loud, raucous experience but it never ceases to leave me with a grin and a giggle.

Peggle's core formula hasn't changed much since... well ever, really, but Peggle 2 is the cleanest the series has been. Taking some heavy inspiration from pachinko boards, at the start of every level you're give 10 metal balls which you must use to hit 20 orange pegs. Rather unlike pachinko, you'll have a bit more control and can select one of several "masters" that possess some rather impressive special abilities. My personal favorite is Jeff, a troll that can call down a massive "Bowlder" that falls almost straight down destroying everything in his path.

Silly as these skills are, they go a long way to adding in just enough of a tactical edge that play doesn't feel completely unfair; other unique elements including special point-boosting pegs that migrate around the board after each shot and random bits that move around requiring some fairly precise timing. Beyond that though, the game is mostly luck, and it still, miraculously works.

While I realize saying that anything is "more than the sum of its parts" is itself a tired phrase, Peggle really does embody a system that, by rights, shouldn't work. Between the insane colors, cute characters, pinch of skill and endorphin-fueled finales, it delivers something rare and beautiful - unqualified happiness. Well... almost. Let's be honest, nothing is perfect, and while playing Peggle often feels like unadulterated bliss, there's a few tiny annoyances that can crop up and blemish the color-fest. 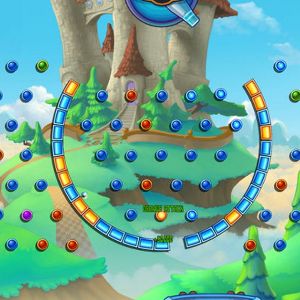 One of the more interesting features of the Xbox One is the Game DVR. With a simple voice command you can record the last 30 seconds of gameplay. Peggle 2, realizing that some of your shots are going to be so mind-numbingly incredible that you won't be able to issue utter even the simplest words has a feature that records your highest-scoring shots. That's actually a really clever idea - here you have a game based on trick shots and high scores that auto-caps all of your best everything. Unfortunately, there's no option to immediately delete those or cancel this feature and I ended up with something like 8 gigabytes of 20 second clips. If that sounds like a lot, that's because it is. Eight gigs amounts to something along the lines of 1000 clips and deleting them is a giant pain in the ass. Unless you're intentionally trying to be terrible, which admittedly can be another really fun way to play, a decent-sized chunk of the Xbox One's relatively modest 500GB hard drive is going to be taken up by showers of particle effects and classical music. It's a pretty small complaint overall, but it's one that can be, more often than not, a bit of a pain.

The only other issue I have with this most exceptional casual title is... oddly enough, its brevity. All told there's about 60 core stages and another 60 challenge maps that range in difficulty form window-dressed tutorial to mind-numbingly painful. Even so, I breezed through all but about five of those in a few hours. Add that to the fact that there are only five masters versus the original game's ten, and its starts to look a little odd. All things considered though, it's not much of a gripe. While there might be slightly fewer stages and half the masters, each of them has a lot more detail and a stronger sense of design and theme than in Peggle the first.

Really, Peggle 2 currently stands as my favorite Xbox One title. Over the past few days, I've met picked a few rounds of my favorite maps and a decent cup of tea as an excellent pick-me-up. Peggle 2 is something rare and special. Yes I had a few tiny gripes, but I had to struggle to come up with just the two. If you've already played any of the previous Peggles, you already know how fantastic 2 is. It's not quite a system-seller, but it's the closest any casual game will ever get to making people want to drop $500. Simple as that.

Bottom Line: A brilliant, addictive downloadable that is designed to target and trigger the happiness center of your brain.

Recommendation: If you're not the kind of person that explodes with rage at the slightest mention of casual games, Peggle 2 is a must-own.