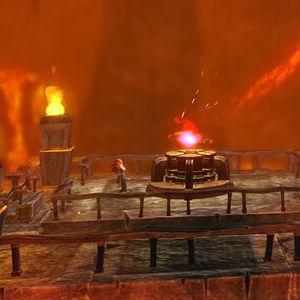 Thanks to a new art style, a different set of gameplay conceits, and a fairly nondescript protagonist name, it's easy to forget that Max: The Curse of Brotherhood is the second game in a series. Max & the Magic Marker was released three years ago, a puzzle-platformer in which players used the titular marker to draw objects and help their flame-haired hero through a variety of environments. The Curse of Brotherhood pays vague tribute to the original, but it could easily have been a brand new title.

In a story ripped straight from Jim Henson's Labyrinth, Max becomes annoyed by his little brother and looks up a magic bit of prose online, allowing him to wish away the hyperactive sibling. To Max's surprise, the wish works, and Felix is snatched from the family home by a monster from another world. Cue Max in hot pursuit, armed once again by his ensorceled stationary, and opposed by an evil old man named Mustacho. Because videogames.

The first thing one notices about The Curse of Brotherhood is just how gorgeous it is. The underrated Unity3D Engine has been put to impeccable use, turning an unassuming 2.5D platform game into the Xbox One's best looking title. The use of bright colors and contrast conspire to create a game that brims with vibrancy on an HDTV, and the lively environments are varied and interesting enough to continuously delight the eyes.

A traditional puzzle-platformer with obvious inspiration from the likes of Heart of Darkness and Oddworld, Max pits the player against pitfalls, monsters, and nasty traps, many of which will rely on ambush to catch the player unawares.

In a nod to the original game, Max will use his marker pen to solve most of the puzzles. However, this time there's no real drawing on the part of the player. Instead, parts of the world glow with energy, from which elemental objects can be pulled via the pen. As the game progresses, Max unlocks new powers, first able to yank pillars of earth from the ground, then later able to bring branches, vines, water, and fire out of their respective portals. Creating environmental elements is as simple as holding a trigger to bring up the pen, moving it toward a glowing area, then holding a button and pulling in any direction. Elements can be slightly altered by the direction and length of the pull, allowing Max to make use of curved branches, or shorter pillars, depending on what he needs.

Puzzles are simple, but there are a few clever hindrances, especially when Max has a full compliment of powers that work in conjunction. For example, he might need to summon a branch, and direct it through a column of water to make it hit a wall and knock it down, or attach multiple vines via branches to create something long enough for Max to grab hold of. 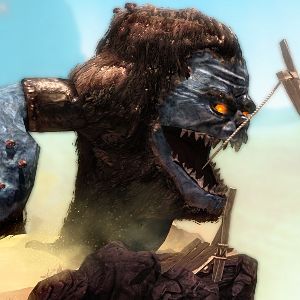 A number of puzzles rely more on conjecture than logic, often leading to cases where the developers seem to be saying, "Try and guess what we were secretly thinking." The worst puzzles rely on unpredictable physics, forcing players to draw and redraw elements as they work out the exact way a branch or water chute must be drawn in order to work just how the developers intended. Sometimes, the slightest deviation in shape can make the difference between successfully closing a gap, and failing to build the bridge/column/rope that'll get the job done.

Puzzles also start to feel really quite repetitive before the game reaches its final encounter. Eventually, yanking pillars and swinging from ropes become tedious busywork more than taxing puzzle-solving. I got tired of hauling branches out of the ether, especially since the game spends far too much time reinforcing its ideas rather than doing unique and varied things with them. If the game had replaced some of its pointless "Pull a pillar to reach a high ledge again, just because we need some content here" moments with some cleverer puzzles, this could have been a far more impressive effort.

The Curse of Brotherhood is not uniformly tedious, however. In fact, it boasts a lot of charm. The best moments involve no puzzling at all, like the several chase sequences in which Max must slide down hills, jump over chasms, and draw himself ropes in bullet-time, all while being pursued by one of Mustacho's hulking minions. These fast-paced chases do a great job of breaking up some of the boredom, look fantastic, and inject a lot of much-needed energy into the adventure overall. I'd have loved the game to have had more fast-paced moments, as they're the points at which Curse of Brotherhood really comes to life.

Max: The Curse of Brotherhood has a number of nice ideas that are tarnished somewhat by overzealous exploitation and a lack of variety, as well as a reliance on guesswork half the time. Even so, it's a charming little game, and the standout moments really are very nicely done indeed. It's probably going to benefit most from being released on the Xbox One during the post-launch dry period, and I doubt it'll be remembered much in the years to come. It is, however, a fairly decent little waste of time, and it does look utterly, utterly beautiful.

Bottom Line: It's gorgeous in motion, and can be a satisfying little puzzle-platformer, but prepare yourself for some trial-and-error, garnished with repetition.

Recommendation: As an Xbox One launch window title, it may be worth getting for the pretty pictures and the occasional thrill. I wouldn't go out of my way to play it, not if you've got other games on your to-do list.