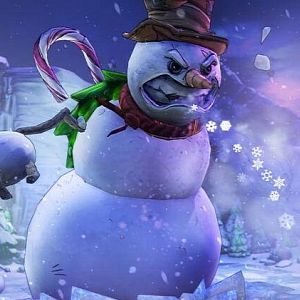 It's Christmas Time in the Borderlands, and they're ringing in this new year with the latest holiday-themed DLC in the series, How Marcus Saved Mercenary Day. True to form, it looks like the forecast for the third Headhunter pack is going to be boxes, guns, and more exploding snowmen than you can shake a boom stick at. As long as your expectations are relatively low, you can expect to get a couple hours of somewhat entertaining gameplay of out of this expansion, which is reasonably priced at just $2.99. However, if you were hoping for something strange and new, this content might taste a little stale.

Your mission this time will come from Marcus, who has been profitably supplying the people of Gingerton with a variety of firearms to give each other as gifts for "Mercenary Day", a vague bounty hunter holiday that's sure not to offend any fans. Gingerton is a typical gingerbread town, sparsely populated with firs and other snowy staples. Marcus needs you to rescue the people that live there from the curse that has turned them into abominable snowpeople, because frozen customers are bad for business... and uhh something about it being the holidays. Having finally come out of the closet about his failed financial venture, Marcus ushers you through the gateway into the wardrobe at the back of his store, to be greeted, sadly not by Mr. Tumnus, but instead by a horde of Bullymong-style yetis.

The best part about this DLC is the boss fight with Mister Tinder Snowflake, which introduces some pretty neat new mechanics. A malevolent Frosty the Snowman towers over you, punting giant snowballs in your direction with his candy cane bat, while his minions, a horde of cursed snowpeople, burst into satisfying flurries of loot as they're destroyed. The big guy can also melt partially into the frozen lake in order to upper cut you from below, somewhat like Thresher burrowing. That's pretty much the end of the holiday creature gambit, though. There doesn't seem to be any notable loot to earn here, either, though you can snag an abominable snowman headpiece and some decent holiday skins, including an ugly Christmas sweater for Krieg and a Rudolf bustier for Maya.

The idea of Marcus as an anti-Santa works beautifully, as his famed frugality really manages to humorously poke fun at some of the more materialistic manifestations of the gifting tradition. However, it's surprising how understated the thematic aspects of this content are as a whole. Christmas is a holiday known not for its subtlety, but for its aesthetic decadence, gaudiness even, almost to the point of being nauseating, and so is Borderlands. And yet, there's somehow a distinct lack of festiveness in this DLC. Sure, you get front row seats to a live bandit yuletide jingle, but that's more conceptually entertaining than actually enjoyable to behold. There's a palpable lack of zombie reindeer pulling a rocket propelled Torgue sleigh, if you know what I mean.

Ultimately, despite having a cute boss fight, this DLC still leaves you feeling underwhelmed. It seems hastily thrown together, especially when compared with the creativity of the game's prior expansions.

Bottom Line: More like the broken candy cane at the bottom of your stocking, left half forgotten in the hurry of the holiday rush, than a real, heart-felt gift to fans of the franchise.

Recommendation: Worth a look only for die-hard fans and completionists.