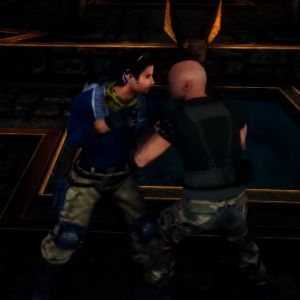 There's a term in the movie industry used to describe a certain type of film - mockbuster. These are movies designed to look a lot like popular Hollywood movies, produced on a shoestring budget and existing only to trick less informed buyers into purchasing them. Movies such as Transmorphers, Atlantic Rim, and Android Cop act as miserable shadows of the movies they're aping, dragging their own fifth-rate stories over the brittle skeleton of a substandard aesthetic replica.

With games like Unearthed: Trail of Ibn Battuta rearing their hideous heads, we really need to come up with a punchy term for games that do the same thing.

As if the name wasn't enough of a clue, Unearthed is a cheap and shoddy "mockbuster" of Naughty Dog's critically acclaimed Uncharted series, starring as it does a wisecracking treasure hunter who isn't afraid of climbing some walls, shooting some criminals, and uncovering a conspiracy or two. As you might expect, anything Nathan Drake can do, Unearthed's Faris Jawad can do far, far worse.

At its very best, Unearthed is a mediocre action game that takes all its cues from far more polished products. There's a rudimentary cover system, some lethargic gun combat, a few "puzzles" that involve shimmying across ledges or climbing on walls, and a close-quarters combat system that fails 50% of the time due to a lack of collision detection. There's even a few vehicle chase sections thrown in for good measure, though their slow pace and nonsensical controls may make you wonder why they exist.

Naturally, the game's a glitch fest on top of things. Faris fails to grab ahold of ledges half the time, gunfire often fails to hit opponents for no other reason than the game decided not to allow it, and the intrepid hero managed to jump through a solid wall and get lost outside of the game environment within the first ten minutes.

To make fun of the graphics would almost be unfair, as it would feel like I'm mocking somebody with a condition. In fact, most of the characters look like they have some sort of mutant birth defect. They all move like Thunderbird puppets, and NPCs have terrifying grey skin and lengthy, slender, alien fingers. Attempts to glitz up the visuals with light glare and dust just make it look like someone dripped bodily fluids over the camera lens, and the final cutscene of this episode (yes, it's episodic!) consists of grainy footage ripped out of some documentary you've never heard of.

Despite all this valid, justified, wholly accurate criticism, I have to confess there's something slightly delightful about this terrible, terrible game. It at least mostly works, and the script is so laughably bad that it takes on a perverse form of genuine entertainment. I'll admit it - I've been known to watch the occasional mockbuster and laugh at how far Dean Cain has fallen to star in so many of them, and that kind of twisted joy can be found in Unearthed. 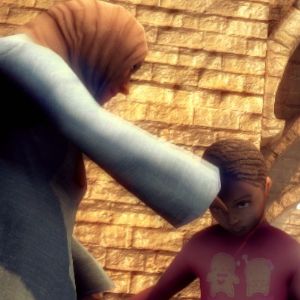 Just one look at its opening sequence and the teaser "trailer" for Episode Two are enough to find the game at least vaguely affable. It's presented with all the flair and zeal of a Hollywood movie, with surprisingly inspiring music and text flying everywhere ... alongside poorly added stock photos.

At the very least, the game tries to mix things up in the gameplay department. In the span of its less-than-two-hour adventure, you get to climb walls, punch bad guys, shoot stuff, use a gun turret, pilot an RC car, and drive a real car (albeit a real car that doesn't behave like any car that exists in reality). It's hard to deny that some authentic heart was poured into the game, even if no actual talent or money accompanied it.

Make no mistake, the game is dismal - controls are so stodgy that it actually makes one's skin crawl, and the protagonist's smarmy not-good-enough-to-be-considered-one-liners are enough to make all decent people want to punch him repeatedly in the lower spine. But ... it's five dollars ... and it is kind of funny.

Bottom Line: Unearthed: Trail of Ibn Battuta is pure garbage. It just about works, it's shameless in its mimicry of better games, and it's as ugly as Satan's pink portion. God damn, there's something hilarious about it though.

Recommendation: There's no way I can tell you to buy it. However, I don't want to tell anybody not to buy it, either.