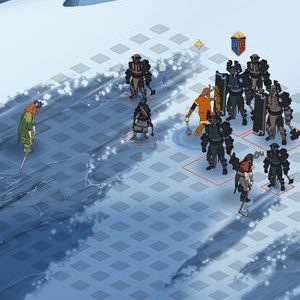 The Banner Saga is a game that will immediately charm you before dunking your head in a bucket of ice cold water. It's a fascinating concept: A traditionally hardcore genre given mass appeal through the addition of beautiful art. It has a story that is, at times, heart-wrenchingly beautiful and emotionally appealing. It is also, at times, frustrating. One of these times, cripplingly, is the very beginning of the game. You're tossed into an immediately confusing situation: Who are these people? Why are they giants with horns? Why are they slaughtering the guys in red and not the other guys? Are they monsters? I think they're monsters. Oh. They're me. I'm playing them. Okay.

You'll have a similar experience about an hour in, when the game takes off the training wheels and plunges you headfirst into a screaming well of scalding difficulty. It's okay though, because you can change the difficulty mid-stride and figure it out. You have been dropped off into the middle of nowhere. You are a babe in this game's wilderness. If you're like a lot of people, this will be off-putting and you might want to quit. If you have the good fortune to be like me, you'll be filled with alternating terror and wonder and it will be great.

Trust me, you should do whatever you need to get through this difficult, confusing early stage. You should fight against the upsetting grind of its first difficult combat section. It is wholly worth it.

The Banner Saga's hand-drawn visuals and striking animation do wonders for it. They kept me immersed and intrigued the whole time. While the characters occasionally look like something out of Snow White (As if that were a bad thing!), that doesn't do anything to detract from the fantastical, mythical feel the story evokes. It has all the hallmarks of a good epic, from a large cast of distinct characters to a slowly burning reveal of plot elements that eventually comes to a powderkeg head. While playing, I keep notes on games I review. Here are the only notes I scribbled under "Graphics" for The Banner Saga: "hot damn. hot hot damn." 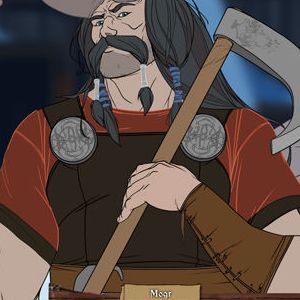 Sadly, the way the game is arranged occasionally distracts from this. A loading screen will sometimes crush into the middle of a short conversation disguised as a cutscene to transition it into a real cutscene, that then transitions into a static portrait dialogue where you choose options via another loading screen. It's a painfully clunky thing to experience. To be fair, the individual parts are really great, but twiddling your thumbs to an all black screen to view five seconds of animation isn't the thing you want to be suddenly doing when confronting world-ending evils.

The basic game is an interestingly lightweight turn-based tactics game, where you move your troops around the map using special abilities and expending limited resources to defeat enemies that usually outclass and outgun you. At the core of the system you're striking a balance between damaging an enemy's armor or health, appropriately wearing down the armor to do enough health damage and slay the opposition. Various statistics, and a willpower system that allows you to do a bit extra with characters, give it enough nuance to be fun without being mysteriously complicated and concerned with below the surface numbers or statistics. All your characters' stats are summed up in a neat column on the left hand side of the screen, with a reminder explanation just a click away at any time.

And that's good, because on the more difficult settings this game is blisteringly hard. On normal difficulty or higher, injured characters have to sit out for a few days between fights, forcing you to chooose your battle party very carefully. Keeping particular characters up and fighting is a delicate balance of your priority to knock out high-value enemies, your long-term needs of front-line officers, and the AI's desperate desire to inflict lasting suffering on you. 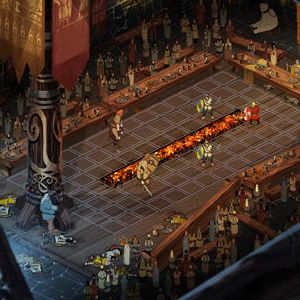 The Banner Saga fights is divided between enjoyable on-rails RPG story and more decisive management of whatever convoy of characters you're traveling with at the time. The game as a whole is fairly linear - with much of the dialogue and conversation taking place no matter which characters are about and alive for it. Occasionally, a character's death can be surprising or even ridiculous, arising from a small choice you didn't think would have that effect. It's the danger of any RPG that has you make most of its choices through dialogue trees, and while it may be frustrating to some, it's a type of play that will be familiar to any Baldur's Gate fan. It was also deeply rewarding on my second playthrough of the game, as different choices fundamentally changed the course of events, as well as who lived and who died.

The game's biggest flaw in basic play is the "renown" currency that you earn from things you do and from defeating enemies. Renown is used for three things: buying items, buying supplies for your traveling caravan, and promoting your troops to higher ranks. While I understood the idea of making you choose between your troops and your followers, splitting funds between that and supply allowed for some strange situations and dead ends during playthroughs. It is entirely possible to get into unwinnable fights because you spent too much renown on supplies and items and not enough on promoting your statistics. More fundamentally, it simply was neither fun nor interesting to be denied character progression in the game because you needed to keep your seemingly arbitrary numbers of troops high enough for the events of the next town.

Recommendation: Fans of pretty things or Fire Emblem have an absolutely cannot-miss game in The Banner Saga.

Bottom Line: The hand-drawn visuals, interesting combat, and epic story mean The Banner Saga is crafted from flawless pieces - even if the final product is a little rough.