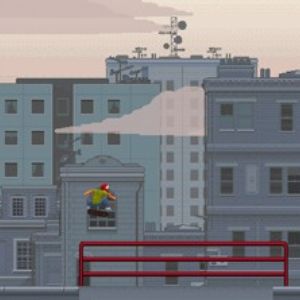 There's nothing inherently wrong with OlliOlli, but I do have to question the wisdom of putting a game so prone to controller-tossing frustration on a system that is, itself, a particularly fragile $250 controller. While playing this sidescrolling skateboard game, I was tempted to crack the Vita over my knee on multiple occasions - and not always by OlliOlli's design.

On the surface, this is a fairly simple little title. You are a skateboard guy who has to do skateboard things, all for the pleasure of a miniscule crowd at the end of the level who couldn't possibly have seen most of what you've been doing from their ground-level, obscured vantage point. As well making it to the end of each stage, one must perform tricks, grind, and complete challenges to earn top scores and be the sickest of all bodacious dudes, bro!

OlliOlli uses a streamlined control scheme that is deceptively confusing in its minimalism. For the most part, you just need to use the X button and the left analog stick, with the button used to gain speed and land perfectly after a jump, and the stick performing jumps and tricks. By holding down the stick, moving it around, and letting go, Skateboard Guy can perform all manner of exciting moves, such as the Ollie, the Front Flip, the Major Cool Freak Out, the Gumble's All Original Sugar Treats, and the Skherme.

Although mechanically rudimentary, it's surprisingly easy to get confused when you have two buttons performing multiple tasks. The early stages can be quite frustrating due to one's brain and fingers attempting to deal with alternate stick flicks and button bashes at high speed, especially when grinding comes into effect, making the player hold down the stick for the length of a rail or wall, before flicking off, then potentially grinding some more or landing on the ground with a button tap.

The irritation is compounded by the fact that some levels seem designed with the clairvoyant in mind. Stages scroll by at a fairly swift pace, and ambushes lie in wait for those who cannot predict the future. Trial-and-error is the regular order of the day, and you can't just jump right back into the game. Each restart has you looking at the challenge list before watching Skateboard Guy perform a dull run-up. 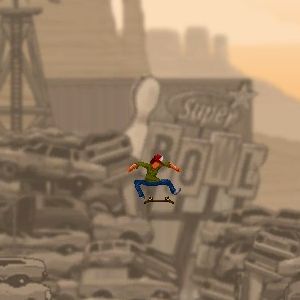 It doesn't help that controls don't feel as responsive as they could be, either. In later stages, where momentum-killing obstacles appear in great frequency, failure can just as soon be down to the game not registering one's input in time as any failing of the player.

There's a lot standing in OlliOlli's way, but it's actually not a bad game. When it works, it can be an immensely gratifying little diversion, striking a great balance between speed and fluidity, while making the player feel pretty damn cool for navigating a series of rails and hindrances with skillful elegance. Each level is short enough to support a drop-in, drop-out portable experience, but a winning streak can prove addictive, spurring the player to stay glued to the screen. The addition of shoulder buttons to create more advanced tricks opens up an impressive amount of moves for such a basic input scheme, too.

With its nondescript music and fairly plain visual style (think Canabalt without the sleek color scheme and originality), OlliOlli is presented without much in the way of charm. It is at least very clear about what you can grind on, what you can land on, and what's an obstacle, so we can at least say the visuals are functional. That's about all we can say, too. At its very best, the game resembles a fairly bog standard mobile phone game.

In fact, that goes for more than the visuals. Though its controls are more nuanced than something you'd find on Android or iOS, the overall feel and quality is that of a $0.99 app. That's not necessarily a bad thing, but one tends to expect a little more than that on the Vita.

Bottom Line: A fun little game at times, a frustrating little nightmare at others, OlliOlli is a relatively decent, if fairly forgettable, mobile game.

Recommendation: Unless you're starving for a PS Vita game, you can wait until this becomes a freebie or a greatly reduced deal. Worth playing, but not necessarily worth paying much for.