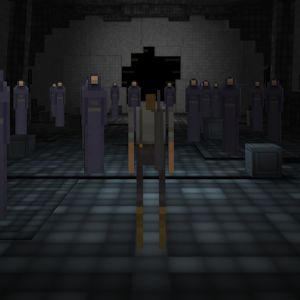 (Edit: Contrary to what I thought, there's a way to skip the intro. There is an absolutely tiny "skip" button that appears IF you click the mouse... in this game that's otherwise controlled entirely via keyboard. Not very intuitive at all, but hey, you don't have to watch the same stuffy stuff all over again, as I was led to believe.)

The game's original pitch was silly enough to earn it a place on the mocking Greenlight Gold Twitter account, but unlike many of the unfortunate mistakes honored by that account's attention, enough people saw potential in Continue?9876543210 to get it flagged for official Steam release. So it is that this game, which could be given the more appropriate title of Ooh, Meta, is now awaiting your pleasure for the too-expensive price of $9.99.

Here's the premise - you are a videogame character (ooh, meta) flagged for deletion after failing in its job of whatever. Now wandering aimlessly among a computer's RAM (or something) and awaiting collection by a garbage disposal thing, our intrepid hero decides to escape his fate. Or is he resigned to it? It's hard to tell because the dialog is complete and total gibberish.

The game's first big problem is highlighted in the very first cutscene. Within the opening few seconds, it delivers all the information you need, conveying adequately enough that you're a failure of a sprite, consigned to oblivion. Except, the cutscene lasts far longer than a few seconds. The interminably dull intro drags out the affair with long-winded sequences of nothing at all, delivering no extra content of worth save a bit of half-decent music, and going on so long you could have two relatively relaxing toilet breaks before the game finally decides to let you play it.

What's dismally hilarious about this is that the game's been clearly designed for multiple playthroughs, warning you early that you likely won't see everything in one go, and requiring a fresh game upon player death. Yet the long-winded intro, which occurs on every restart, is unskippable. You're expected to watch it, and repeated instances of pre-level cutscenes, from beginning to end, every time.

It's all gobbledygook, too. Meandering jargon, masquerading as depth. If you squint, you can read statements on the nature of mortality buried deep within the prattle, but nothing of actual value is said, nothing half as clever as it would like to believe.

As a game, Continue?9876543210 is no less convoluted. Each level consists of running around and talking to NPCs, unlocking doors to rooms, and remembering things people have told you so you can tell somebody else. Progression relies on memory games, essentially, as an NPC spouts some silly sentence at you so you may regurgitate the information to somebody else. Room doors are locked, and random NPCs must be paid, or keys must be earned, to open them. If you successfully get into a room and remember what to tell the right person, you'll be rewarded with either lightning or prayer. Lightning demolishes barricades that block the level's exist, while prayer builds shelters that can protect the player in later stages. 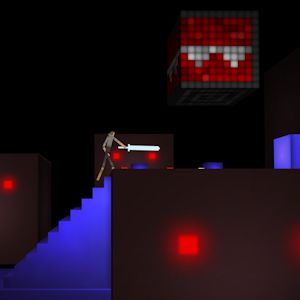 Each level is split into timed "rounds" with a battle at the end of each round (I realize everything I'm saying sounds vague and weird, but I'm actually doing a better job of describing it than the game does). Battles are combat sequences that take many forms, from Zelda-like dungeon sequences to arcade shooting scenes, though the gameplay found here is but a shadow of the stuff it's trying to mimic. These combat sequences serve a frequent interruption and there's not a lot of variety to them. They do, however, reward one with keys that can open doors in the level for free.

If you spent too long in any given level, lightning starts destroying the floors, forcing you to try and escape to an open exit. Because the player character frequently gets caught on the scenery, and the controls are slippery and loose, you can expect to fail here quite a bit.

In between regular stages are encounters with the garbage collector, and here's where shelters come into play. Players must hide in buildings while lightning rains down upon them. The lightning can destroy buildings, and tend to destroy a lot of them, meaning that if you didn't build enough shelters before the collector comes calling, you're going to get killed. Between the time limits on each stage, and the balance between breaking exit barricades and building shelters, the game conspires to screw you over fairly regularly.

Of course, that's the point though, right? It's all so inevitable! We all die no matter how much we try and fight it, and etcetera. Yeah ... doesn't make it any less annoying from a game perspective.

This entire game is nonsense. It's all complete and total mumbo jumbo. The weird part is, it's also got a slight - everso slight - charm to it. The game is often infuriating with its turgid babble, but the core idea is bursting with potential and the atmosphere is surprisingly good. There's a fantastic soundtrack, ruined a little by the obnoxiously grating sound effects, and I'll say that, while I found the intentional vagueness of the "narrative" offputting, I was at least somewhat fascinated, and I readily replayed after failing the first time, just to see what new and strange environments I could uncover.

I can't say I like Continue?9876543210 in any way, shape, or form. Despite my harsh (and deserved) criticism, however, I cannot say I truly hate it either. It's like a Jack Russell dog in many ways - it irritates with its senseless yapping, but it's kind of cute.

Still, with its repetitive gameplay, insubstantial cutscenes, and overbearing smarminess, it's hard to put up with it for long.

Bottom Line: Continue?9876543210 is a grandiloquent exercise in treading conceptual water. One of the finer examples of what can go wrong when a game swallows too much of its own guff, there's nowhere near enough depth evident to justify its insufferable trumpet blowing.

Recommendation: It's probably worth watching a bit of on YouTube, but for ten dollars, you can buy ten better games.