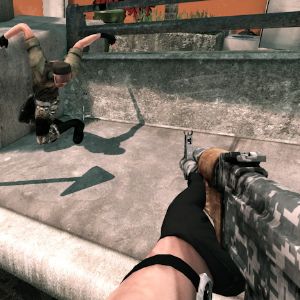 The state in which Rekoil was released still shocks me. That a professionally released game, with the backing of a publisher, could be so unforgivably bad is a stark reminder that Steam has absolutely no quality control - something it severely needs. Buggy, laggy, prone to crashing, littered with bizarre graphical glitches and even failing to register my keyboard input at one point, Rekoil left a ghoulish first impression.

In our Patch Culture age, however, the developers were able to apply some duct-tape the next day which has, by all accounts, fixed a lot of the issues. Games run a lot smoother, I've not seen any instances of gun models popping out of their own skins and floating around, and overall I can report that Rekoil is in a state one could deem playable.

Unfortunately, even with its fixes in place, Rekoil is a vapid, heartless, utterly inferior arena shooter, desperately mimicking the likes of Counter-Strike and Call of Duty, but lacking the polish, the prestige, or even the most basic of quality standards.

Oh, and it still crashes. Often when one presses the Tab key to bring up match results. Because that makes sense.

Dispensing with the progression systems seen in many modern games, Rekoil provides players with everything they need to customize their loadouts and get blasting. The usual cavalcade of expected weaponry is on offer, from assault rifles to light machine guns to rocket launchers. Plastic Piranha wasted no imagination on the range of guns available, though browsing them in-menu is an utter pain due to inexplicable loading times that occur every time you cycle through to a new weapon. You can choose from a similar garden variety of sidearms, as well as pick one of several swampy-looking, poorly-animated character models.

When it comes to the action, imagine every humdrum shooter from the mid-nineties onward and you'll pretty much have this one nailed. Matches mostly consist of players running around and firing sniper rifles indiscriminately, or otherwise mowing each other down with assault rifles in a variety of large but uninspiring maps. There are multiple game types, none of which are original, and most of which are moot because everybody's playing Deathmatch or Team Deathmatch almost exclusively. Of all the servers, typically there's only one or two matches with a suitable amount of players - hardly surprising, because anybody who'd want to play an online multiplayer shooter has dozens of far better choices already. 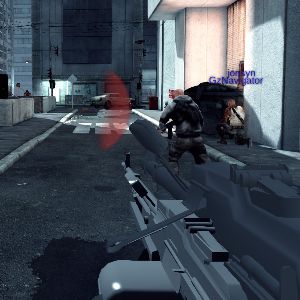 Hell, even GameLoft's Modern Combat series on mobile devices feels more unique and interesting than this, and that's GameLoft, a company that's made its fortune by shamelessly copying better games. Plus, at least the Modern Combat titles don't carry an insulting MSRP of $14.99. I'd maybe recommend Rekoil for a buck or two. It would actually be a competitive online shooter at that price, if only for those with spare pocket money and literally nothing better to do.

Even when running at its absolute best, there's no escaping the complete and total pointlessness of Rekoil. If you're going to be just another online shooter, the least you could do is try to be a very good one. This ugly, unrefined, criminally boring me-too "effort" struggles to even be counted among the mediocre shooters on the market. Discounting its bugs, crashes, and glaring technical incompetence, Rekoil is a lifeless shadow of better games, one that has to aspire to mundanity.

The game's intended differentiator is its modding tools. Rekoil boasts of powerful modding tools that allows users to create their own maps. Again, though, this is something that's been a part of online PC shooters for years, and any competent modders would be wasting their talents on a game this worthless.

In fact, whatever one does with Rekoil feels like a waste. Whether one is playing it, modding it, or streaming it using the game's presumptuous built-in Twitch TV feature, there's no escaping the fact that hundreds of thousands of better uses of game-related time exist. This is all before one deals with the fact that Rekoil is hideous to look at and takes any excuse it can to crash to the desktop.

A total waste of everybody's time.

Recommendation: If one has to choose between this and Takedown: Red Sabre, get this. That's the only circumstance under which I'd recommend it, though.