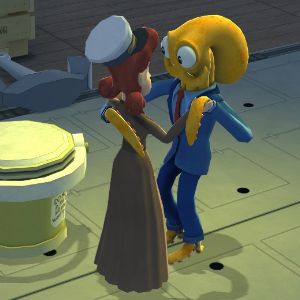 It's hard not to see something inherently dark in the world of Octodad. Here, an octopus dons a suit and attempts to pass itself off as a human man, having gotten itself married and somehow siring children. On the surface, it's a cute concept, reminiscent of The Animaniacs' Chicken Boo character, and we're expected to laugh at the inexplicable lack of suspicion from Octodad's societal peers.

But there's something inherently disturbing about a family witnessing a husband and father staggering uncontrollably about the house, smashing furniture, smacking his children in the head, and burbling incoherently like a drunk, violent monster. If indeed the world sees Octodad as human, at least while he's wearing a suit, then the smiling obliviousness of his family takes on the appearance of desperate denial, the panicked Stepford grinning of Arthur "Trinity Killer" Mitchell's enthralled wife and kids.

That said, it is pretty funny to watch the undercover cephalopod throw bottles around.

For those unfamiliar with the original Octodad, the premise is simple - as the titular tentacled father, you must pass as human while dealing with the awkward movements of a landbound sea creature. With demented physics and controls reminiscent of the delightfully frustrating QWOP, the player must attempt to live a normal life in a most abnormal fashion.

To move or interact with the world, one must take direct control of Octodad's tentacles, thus taking indirect control of Octodad himself. The simple act of walking, for example, requires one to lift a tentacle with a button press, thrust it forward, then lift the other and repeat the process. The arms are manipulated in a similar fashion, manipulated via analog sticks while one presses another button to latch onto objects. 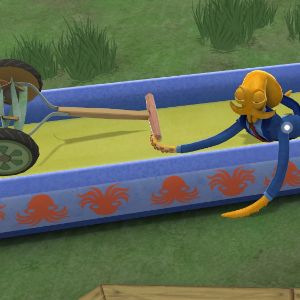 The result of this control scheme is an intended anarchy, as Octodad flails around amusingly when trying to do something as simple as make a pot of coffee. It's hard not to laugh as the gibbering creature knocks over chairs, inadvertently tosses boxes, and propels himself wildly across the floor with his limbs stretching manically in all directions. Thanks to some smart streamlining of the controls (certain actions, such as pouring liquid or using tools, are performed automatically when positioned correctly), Young Horses does a fine job of balancing chaos against playability. For the most part, the game is wild and hard to control, but simple enough in its demands to not get too frustrating as a result.

Dadliest Catch is broken up into several environments with a series of environmental puzzles. For example, the supermarket requires one to pick up several food items by climbing a display stand, squeezing through the shelves of a freezer, and sneaking up to another shopper's cart in order to steal the last box of cereal in the store. Packed with visual gags, references to other popular indie games, and kept ticking along by its own ridiculous physical comedy, Octodad is a hard game to hate, and one may find themselves blazing through its humble two-hour running time.

The game is at its best when it allows the player to tackle objectives at their own pace (and desired level of chicanery). This is a little undermined by an unnecessary fail-state (mess around too much and people will unmask you for what you really are), not to mention a fairly disappointing stealth section that has you sneaking clumsily around and shifts the balance from fun to annoying. The stealth parts in particular feel included for the sake of making Octodad more traditionally "game-like," an insecure move that can be safely shaken off in a post-Stanley Parable world. Instead, 'Dad has to deal with the threat of an evil sushi chef, hell-bent on exposing our hero's charade and turning him into food. It's a needless sense of urgency that turns Octodad into something more typical than remarkable.

I'd much rather the game continue to be as domestic and laid back as it starts, rather than regress into sneaking segments, action sequences, and a fairly mediocre concluding boss fight. The appeal of the game is in trying to perform mundane tasks as an oceanic dissimulator, not in trying to be a poor man's Solid Snake (or in this case, Decoy Octopus), and the deliberately confused control scheme is terribly suited to such bog-standard gameplay. 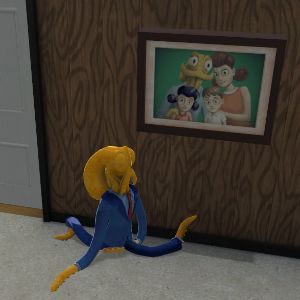 Outside of the story mode, there's co-op for those who want to try and control one octopus with two brains, and tools to allow users to create their own levels. People are already uploading their own inventive stages, and considering the short campaign, it's highly recommended that one checks them out. From score-based challenges to anti-gravity and shrunken modes, there's some silly stuff to play around with.

Boasting a bright, cartoon-like visual style (probably for the best, as photorealism here would be horrifying), and backed up by some wonderfully catchy music, this is a beautifully presented little adventure. Environments are large and clear, the octopus is hilarious to watch in motion, and the voice acting is pretty endearing to boot. Even the children aren't too annoying to listen to, which is a rare treat!

A few technical issues hold things back, sadly. Twice I had to reload a checkpoint - once because 'Dad's leg got stuck between a child and some scenery, and once thanks to the camera completely freezing, rendering me unable to see anything I was doing. Checkpoints are generally well-placed, but it's a shame that I had to reload any at all.

Dadliest Catch is a damn funny game and is, for the most part, a joy to play. However, being so damn brief while squandering its concluding chapters on some unsavory and unimaginative gameplay makes this one less of a guaranteed must-have than it deserves to be. At its best, this is a brilliant, inventive bushel of laughs. At its worst, it's a stealth game with terrible stealth controls. Nevertheless, it's definitely a fun ride that will make itself more valuable as folks continue to add user-generated levels.

Bottom Line: Its brevity and reliance on contrived challenges work against Octodad: Deadliest Catch, but when it's at its best, it's a damn hilarious game that'll charm the pants off most players.

Recommendation: It may be a good idea to wait and see what user-generated content comes up, but if you're in need of a good chuckle and don't mind spending $14.99 for a two-hour distraction, Octodad will do right by you.