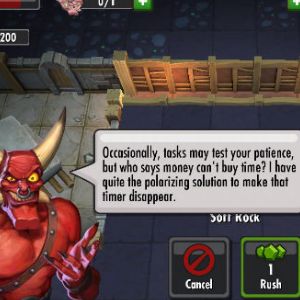 As I write this review, I am waiting for one of my imps to finish mining a block that I commanded it to start digging last night. It has hours left to go. Something so simple, something that took a handful of seconds in the original Dungeon Keeper, is taking me 24 hours in the twisted mobile reimagining.

It started in the game's very tutorial. The grasping. The harassing. The demands for money. As I was being taught about how gems can speed up the building and excavating of dungeons, the game's narrator - a twee redesign of the once iconic Horned Reaper - openly mocked me, making fun of how "polarizing" in-app purchases were before shamelessly telling me how spending my real money will grease the wheels and get things accomplished. This is how it begun, and it only got worse from there.

The first block I clicked on was going to take four hours to excavate with one of two imps I had. Not a problem, I had a bunch of gems already. I used them and sped up the process. As I did for the next block. Then the next block. Then I had no more gems. I started trying to dig out a 4x4 room two nights ago.

Two nights ago ... and I am not finished digging out a 4x4 room.

This is the long-awaited return of Dungeon Keeper, a game that hides behind the mask of "free to play," but couldn't even be called that. It's free to wait, but not to play anything. There's nothing to actually play. "Playing," in Dungeon Keeper consists of opening it up when you remember once a day, poking a few things on the screen, then closing it down and finding something else to do for anywhere between four and twenty-four hours.

The original Dungeon Keeper was a masterclass in creating engaging strategy sims. With its dark humor, simple interface, and challenging need for balance and maintenance, it was an easy classic, and one I still happily play today. The acquisition of power, the satisfaction in attracting and keeping hordes of varied monsters, lay at the very heart of the game's appeal. None of that appeal can be found in this perverted farce. 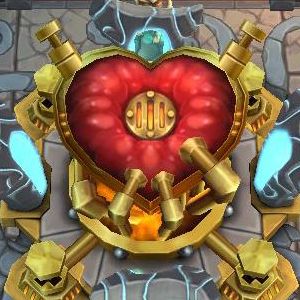 How can one gain any satisfaction from a game like this? The constant acquisition of gold and stone from mines (you can't dig gold out of the map yourself anymore, that would be too much like gameplay) means nothing when the real currency of the game is gems, and the acquiring of gems isn't satisfying because you just buy them with real cash. There's no joy to be had here, no feeling like you've done anything worthwhile. You either spend your way to the top or spend hours upon hours collecting things of zero value.

Even if it weren't propped up pathetically on in-app purchases, this is a lame and pitiful excuse for a Dungeon Keeper game. The map is small, progress is linear and predetermined for you (nothing to discover here, no secrets to find or a huge bestiary to attract), and doing battle against others is facilitated by a separate, stripped-down Tower Defense style game that lasts a few seconds and holds little strategic challenge. The major draws of the original titles are nowhere to be found. The dungeon doesn't feel like a living, breathing thing. It's a static, quiet place, where boredom reigns supreme.

There are cursory nods to the original. You have a dungeon heart, from which you summon monsters, though summoning is manual and you really only need monsters for the segregated battle mode. You build rooms to attract more monsters, but there's nothing of the original game's variety, and the manual nature of summoning means you don't get that old feel of a natural, spontaneous world. You slap imps - on a separate imp-slapping screen - which makes them allegedly work more efficiently for a modest amount of time, though the time it takes them to do anything is so vast, there's no observable difference. These limp-limbed gestures toward the old games, however, really only serve to betray how contemptuous the rest of the "game" is.

I'm a big defender of most games - even ones I hate - when somebody says they're "not a game." The accusation of something not being a game is a blinkered and often weak form of noncommittal criticism. In the case of Dungeon Keeper, however, I can find no defense. It isn't a game. It's a cynically fabricated cash delivery system. Like Square Enix's equally disgusting Final Fantasy: All the Bravest, all that Mythic has done is take a property with prestige, and squander its good reputation on a grotesque cash grab, a "game" designed to provide absolutely nothing to the player while clawing as much coin as it can before those playing realize exactly how barren the husk they've invested in is.

This certainly isn't Dungeon Keeper. With its babyish character designs, threadbare interactivity, and miserable begging for cash, it's FarmVille for even bigger suckers. 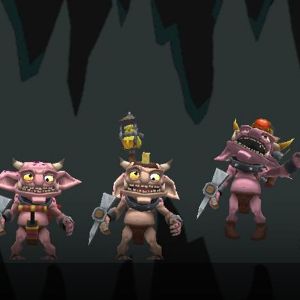 It's bad even by the usual standards of mobile "free to wait" games. The Simpsons: Tapped Out let you do at least a bit more before launching its psychological warfare on you. Dungeon Keeper wastes no time in attacking the player with its harassment for cash. It can't wait to employ its focus-tested blitzkrieg of harassment and mental waylaying. From the very outset, its heartless endgame is communicated clearly - it wants your money, and it wants you to give it that money in exchange for nothing. Even worse, it actively laughs at you while it pries open your wallet, cracking self-aware jokes - it makes fun of in-app purchases, then assails you with them anyway. Because fuck you.

I'm at a zero tolerance for games like this. When there are good free-to-play games out there, games that get your money by offering enjoyable experiences first and worrying about your cash later, there's no excusing the kind of unimaginative, lazy system that actively bars the user from playing without paying an increasingly exorbitant toll. Holding the game hostage is about as low as it gets, and I have no choice but to consider any developer that does it the very worst of hacks. This is a hack move by Mythic, and whether it had any agency in Dungeon Keeper's design, or executives on high mandated it, all involved should be ashamed of themselves. This is shameful, and if anybody's proud of the horrible thing, they deserve nothing but scorn for being so pleased about actively contributing to the continued long-term harm such short-sighted and damaging games will do to this industry. This business model, built entirely on aggressively exploiting a bubble before it bursts, can bring nothing but illness toward an already unhealthy market.

That's Dungeon Keeper. One of the worst examples of a cancer that is eroding the market and has already destroyed the credibility of the once promising mobile gaming sector. Even worse, it's taken a beloved series and dragged its name cruelly through the mud. Things don't get much more reckless, shameless, and spineless than this. I hate everything about Dungeon Keeper for mobile, from the ground up.

Bottom Line: A cynically motivated skeleton of a non-game, a scam that will take your cash and offer nothing in return. A perversion of a respected series, twisted by some of the most soulless, selfish, and nauseating human beings to ever blight the game industry.

Recommendation: War for the Overworld is on Steam and, at $21.99, will cost less than what Dungeon Keeper wants off you long-term. MUCH less.