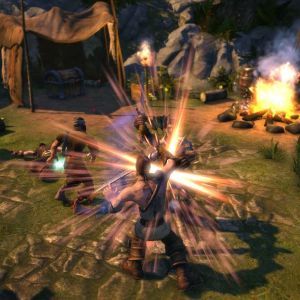 With the Xbox One and PlayStation 4 ushering in a brand new generation, it feels like Microsoft missed the boat with Fable Anniversary. Indeed, the love affair with "HD Remasters" was at its peak a few years ago, and while there's obviously sentimental value in rereleasing Fable in 2014, the gesture feels like a remarkably late one.

Then again, even if it had released before now, it might not have been quite enough to make Fable Anniversary worth checking out for all but the most dedicated of series fans. While it's certainly nostalgic to step into the Albion of yesteryear and enjoy it with an HD coat of paint, the game really hasn't held up very well.

With its uncomfortably messy combat, obtuse menu system, and overall awkward controls, Fable Anniversary would have benefited from more than just a visual upgrade. Indeed, the original Fable could have done with a full-on remake that modernized everything, as this is one severely dated action-adventure, even when using a control scheme that more closely resemble Fable II. Even by the standards of its time, Fable was always a little sloppy, favoring its idealistic ambition of choice and personal narrative over slick, polished gameplay. In today's world, going back to the clumsy original has a tendency to make one cringe.

There's something to be said for preserving the purity of a game's original state, but after having to reload multiple checkpoints in multiple quests due to otherwise unsolvable bugs, and having my eyes struggle with a number of physics and framerate problems, I can safely say there's a point where faithfulness can safely be ditched. As far as I can tell, Anniversary doesn't introduce any new problems, but the experience would have been improved tremendously by the removal of old ones. 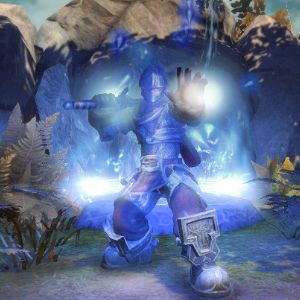 Fable Anniversary is not an altogether unpleasant experience. While even back then, Lionhead's ambitions far outpaced its capabilities, it's still hard not to be pleased by the quirky and unique things Fable tried for its day, and it's still a damn better game than Fable 3 ever was. While combat is clunky and navigating the world feels cumbersome, the joy in acquiring power, and becoming a scion of good or evil, is hard to resist. While Fable II would prove more nuanced in its approach to player choice, Fable's extreme take on morality carries with it a certain charm.

It's also hard to dislike the game's story, introducing as it does a villain yet to be topped by the series, Jack of Blades, and feeling far more fleshed out and clever than later chapters in the series. With its evocative soundtrack and amusing voice actors, not to mention a ton of content, there's certainly plenty of good left hiding in Fable if you can look past its unkind aging process.

In remaining faithful to the original, Lionhead hasn't done much to offer content. There are Achievements and Avatar Awards, obviously, and the high definition visuals are most noticeably better. The biggest addition to the game comes in the form of SmartGlass integration, which adds interactive maps, visual comparison shots, and locations of hidden items to one's connected tablet or phone device. While a cute little extra, one really isn't missing much by refusing to partake, and I found myself unwilling to bother connecting after trying it once.

If you absolutely love Fable as a timeless classic, then obviously Anniversary is going to appeal. Everything about the original has been preserved, save the pleasant visual boost, but that preservation is going to be a hindrance to anybody who may have forgotten exactly how rough Fable was and is. It's a tough game to love nowadays, but if you can make it there, you'll get what you want - Fable, but prettier.

Bottom Line: While a solid job of remastering the original has been done, the game itself could have used a lot more of an upgrade. It's aged pretty damn badly, and no amount of visual polish can mask that.

Recommendation: Obviously, the more ardent fans of the series are going to love Fable warts and all, and won't mind its creaking bones. If you're one of them, pick it up. If not, you may want to remind yourself exactly how playing Fable feels before splurging on the rerelease.