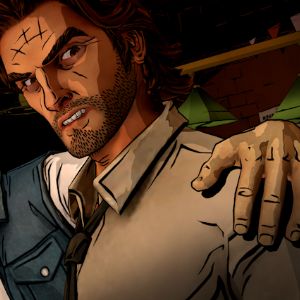 It's very hard to discuss this game without spoiling the mystery, as well as dealing with the branching storylines as the episodes progress, but I can tell you that The Wolf Among Us is a noir story set in a fictionalized 1980s New York City in which characters from famous stories have been exiled from their "Homeland". The game plays similar to a point-and-click adventure, but like Telltale's The Walking Dead, the beauty of it comes from making dialogue choices and roleplaying decisions as you uncover the plot. This episode continues the story of the hard-boiled Bigby Wolf, and it's a short but not necessarily sweet journey through a fascinating setting.

Smoke and Mirrors begins almost exactly where the first episode left off. You start off playing as Sheriff Bigby Wolf - a.k.a. the Big Bad Wolf from the fairy tales -interrogating a prisoner. You decide how far to push violence versus questioning, with Bluebeard appreciating your dark side and Acting Mayor of Fabletown Ichabod Crane disapproving every blow. The violence isn't as bad as some scenes in other games - there's no pulling teeth or power tools here - but smashing bottles in the face can be just as terrifying, and just as effective. What's stunning is how far you are willing to go, and more importantly: why.

It's a testament to how good Telltale has gotten at telling interactive stories that don't just feel like anemic Choose Your Own Adventures. For the hour and a half you play through this episode, you travel to some very dark places not only in terms of setting - a strip club run by Georgie Porgie, a magical backroom examination table, a dingy hotel room frequently rented by whoring Fables - but in the actions Bigby Wolf can make. You can exhaust every option in conversations and still not get the information you need. Sometimes that extra push to get someone to talk is a lot easier when your potential informant is busy mouthing off. A stray insult tossed at Bigby, or a disparaging remark about Bigby's employer and paramour Snow White, was enough for me to push the violence that much harder. I started to think about my own vicious temper and angry impulses as I chose Bigby's actions - yeah, this game is good. 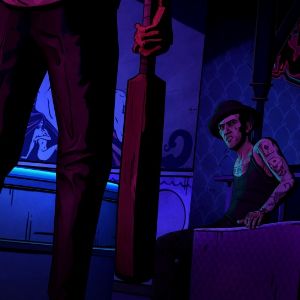 I have to say that the adult themes of sexual abuse and violence are explored pretty heavily in this episode, and that might be off-putting for some of you. In one scene, there's blatant nudity as an exotic dancer is present throughout Bigby's entire conversation with Georgie, and the situation of human trafficking (sorry, Fables trafficking) and forced prostitution is grossly presented. The final scene is also gruesome in its depiction of roleplaying during a sexual assault. Let's just say I was uncomfortable when my two-year-old daughter wanted to wear her princess dress the day after I played through this episode. You have been warned.

This being the second episode in a planned series of five, playing through the events of Smoke and Mirrors may leave you feeling a bit unfulfilled. The cliffhanger of the first episode doesn't get the resolution it deserves, really, but that's a minor quibble. Decisions and plot points in the first episode do retain their importance. Not only are they featured heavily in the "Previously on Fables" sequence that starts your playtime, but, throughout the episode, characters you met before show up again and remember how Bigby acted to them, for better or worse. Notable appearances are made by Mr. Toad and his adorably shy son, as well as the Beast and his wife Beauty as they go through some marital problem. Things happen, surely, and secrets are revealed, but it's over far too quickly to be a truly satisfying standalone experience.

The brevity of this deliciously dark episode will be forgotten when all five episodes are released, but for now paying for Smoke and Mirrors piecemeal may leave you wanting more. Which means Telltale was pretty successful in its execution, honestly.

Bottom Line: The writing in the second episode of Telltale's A Wolf Among Us series does more to investigate the dark corners of your soul than your shrink can in an hour. Sadly, you can play through the episode in just as much time.

Recommendation: Episode Two lives up to the excellent introduction and you won't be disappointed in anything but the length. Season pass holders rejoice, but single-episode-purchasers may want to wait until more of the series is released to gorge.