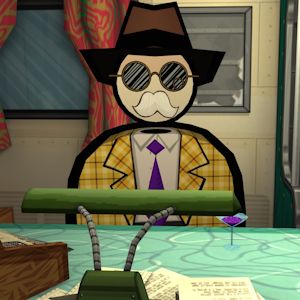 (Disclaimer: The Escapist's reviews editor, Jim Sterling, has a voice acting role in Jazzpunk. While we can assure you this is not a factor in the review, you should be aware so you can decide for yourself how biased it may be. Jim assures us no threats were leveraged at any other staff member.)

Jazzpunk is one of those games that absolutely won't take itself seriously for a moment. It lives alongside games like Saints Row in that it never says die on a good joke. It's a piss-take on the spy movie and the "punkification" of every known historical era into its own overblown genre. It's genuinely and interestingly fun, with a bizarre aesthetic all its own and a serious lack of respect for the basic conventions of what a single game should be. It has minigames aplenty, and strange one-off mechanics sprouting from every convenient surface. The basic premise is that you're in a bizarre alternate 1950s, where apparently everyone is a strange cyborg of some kind, rife with upgrades and parts. And you're in the United States of Japan, near as I can tell.

At its heart, Jazzpunk is a first person explorer. You're dropped into clever sandboxes full of toys and left to explore, play, and enjoy what you please. It's walking an odd, fine line here. Any less gameplay and the thing would feel like a string of loose environments full of jokes, any more and it'd be a narrative-driven experience with odd sideshows to the main event. As it is, you're drawn into a world full of curious, and hilarious, things to explore - and there's exactly zero pressure to do anything other than that. There are no time limits, for example, and most of the content is entirely repeatable. You equip items and carry them with you, using them to have odd interactions with the people around you - usually other eccentric cyborg types, but sometimes random objects around the world. That's the typical play, but the game is so packed with minigames and discoverables that there's a lot of other content to enjoy as well. Like a fruit bowl that, when poked once, became a demented elder fruit god, whereupon I had to fight it off by slicing flung bananas in half with a sword. It's that kind of game. 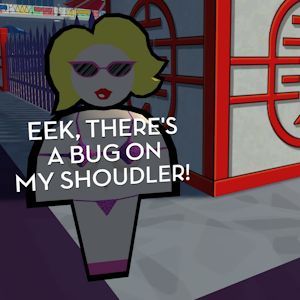 It is also fundamentally an exploring game. If you ran through it at the fastest pace, completing the "main" objectives for each stage, you'd be out of it in an hour. I could see a perfected speedrun taking fifteen minutes at most. This is definitely a game that's entirely dependent on how much you like to explore and see what you can click on. After a while, this can certainly grate on you. The basic gameplay of hunting for new things to see isn't, itself, very engaging. Eventually, you'll be hitting plants in a corner with a flyswatter and decide you're just about out of patience with looking for new jokes. That's okay - Jazzpunk is certainly going to be one of those games that rewards repeat play.

Some of the innate problems with adventure and sandbox games will certainly be prevalent here: it's simply impossible for there to be an interaction between everything you can hold and everything you find, but you'll inevitably find one or two you desperately wished would work. Much of the limited feeling you get from that situation is assuaged by the varied minigames and visual gags sprinkled throughout, as they tend to mix up the gameplay enough. There are also lots of jokes that rely on a little computer and internet culture knowhow - but just as many that are funny without the referent.

Jazzpunk overall is kind of a mixed bag - but it's a good bag. The kind of things you find in the bag are good things. There aren't any bad things in the bag, but not everything in the bag is great. You'll have fun playing the game, I can guarantee that, but what the game can't guarantee is that you'll be immersed and engaged. The fantastically stylistic world, the humor, and the goofy story, though, ultimately triumph over the somewhat shallow story and slow gameplay.

Bottom Line: What's here is undoubtedly high quality, but some may find themselves just wanting more of the game. It's a blessing and a curse.

Recommendation: Fans of recent meta-game-games like The Stanley Parable, or those who delight in off-brand tech humor, will find a lot to love in Jazzpunk.