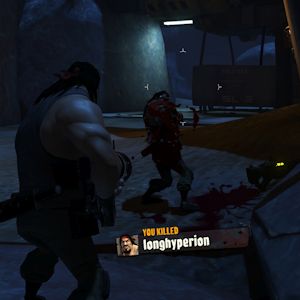 Thanks to the efforts of Zynga, King, and Electronic Arts, one could be forgiven for thinking that free-to-play games are all cynically designed cash grabs, existing only to frustrate players and take their money. It's a shame that the "F2P" model has suffered such a wound to its credibility, as there are fine examples of games that aren't heartlessly constructed with contempt for the audience.

Loadout is the latest, and perhaps greatest, example. A free-to-play game that trades on goodwill rather than psychological battery, a game that provides a quality experience first, and an appeal for your money second. In short, it's everything the disgusting Dungeon Keeper could have been, if it were more interested in pleasing an audience than rooting through our wallets.

While it's tempting to spend the entire review talking about how Loadout is better than any free-to-play game Electronic Arts has dumped onto the saturated market, this third-person shooter is good enough to deserve discussion on its own. Even as a standard multiplayer title, Loadout can sit comparably next to paid experiences. It's a polished, fast-paced, funny, smartly designed arena combat experience, and the fact it's free only sweetens the deal.

A cartoony third-person shooting game with violent humor, it's hard to avoid comparisons with Valve's Team Fortress 2. There's no doubt Edge of Reality took inspiration from Steam's premier comedy shooter, but that isn't to say it doesn't boast its own originality. Character design is exaggerated and surprisingly inclusive, while combat sees character's lose chunks of flesh, get cut in half, burn vividly to death, and explode in horrific giblets. The brutality of the game is shocking in its graphic nature, but the cartoon visuals make it more funny than appalling ... or it will for most people.

As its name implies, Loadout is all about the ... loadout. Weapon customization is a big part of the experience, with players able to choose from four distinct weapon types and then add extra pieces to create their own preferred weapon. Basic guns come either as standard rifles, laser beams, plasma weapons, or rocket launchers, and by playing around with stocks, sights, barrels and bullets, any number of effects can be added. You might craft a launcher that fires three corkscrewing rockets, or turn the rifle chassis into a shotgun and fill it with slugs that restore health to teammates rather than damage foes. 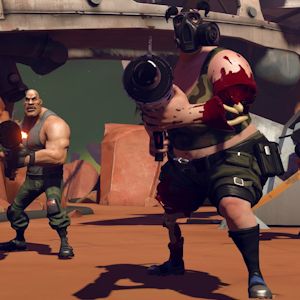 There's a lot to play with, but oddly enough, the standard weapons are possibly more effective than any of the exotic combinations one might imagine. I've had a lot more luck using a fairly bog-standard beam gun, and have thus been uninterested in all the different toys at my disposal, many of which have led to less success on the battlefield.

As well as guns, there's also personal equipment that can be unlocked. You may only carry one, so you'll have to choose between such gadgets as healing grenades, shields, turret buddies, or booby-trapped item pickups. I've found these to be far more useful than gun parts, to be quite honest, having more direct impact on one's survivability, support power, or damage output.

Acquiring new weapon parts and equipment requires an in-game currency known as Blutes. Interestingly, for a free-to-play game, the resources required to improve your combat gear is all earned in-game. You won't be able to just outright purchase the Blutes you need to unlock fresh stuff, having to earn it within multiplayer matches - the old fashioned way! The only advantage you might purchase with cash would be temporary boosts like double XP, and while one could accuse that of being an example of a controversial "pay to win" system, the starting weaponry is again so effective that nobody should feel like they can't compete.

Loadout's secondary currency, Spacebux, is what you need real money to obtain, and as well as purchasing XP boosts, it's also needed for aesthetic changes. Without Spacebux, your character can be one of three standard character models. By investing real cash into the game, you'll be able to play around with costume pieces, adding hats, masks, pants, tops, and other silly accessories to create a far more personalized avatar. It's a system in which one never feels strongarmed into spending money, but if you start enjoying the game enough, you're going to want to stand out more and will feel inclined to toss some dollars into it. It's a game that tries to encourage spending, rather than force it, and I have a lot of respect for that. 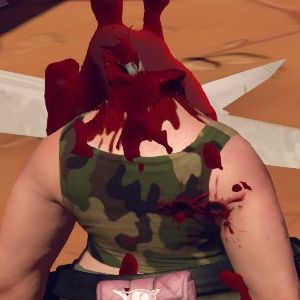 I can imagine quite a few people will get invested enough to happily support the game with cash, too. Outside of its fun aesthetic, burgeoning crafting options, and laudable pay model, Loadout is just a damn fun game. It's solidly built, easy to get into, and it provides some high quality run-and-gun blasting.

There are a decent number of maps, with gametypes that include capture-and-hold, capture-the-flag, kill-confirmed, and a fun mode in which one teammate has to collect items and dump them in a little cart while the others protect and/or attack. There's nothing in the game that's wildly original, and the combat isn't the most refined around, but it's a great game to pick up, play for a couple rounds, then put down for later use.

The only big issue at the moment is the game's matchmaking, which can sometimes take a little too long (though it's constantly being improved). Connections aren't always reliable, either, and I've had a few instances of a game ending, then disconnecting before I can claim my end-game rewards. These issues aren't too frequent or obtrusive, but they can certainly annoy whenever they crop up.

Outside of that, though, we've got a pretty well made shooter that costs nothing to obtain, is pretty quick to get into, and doesn't try to pry your wallet open straight away. It's almost sad that we have to applaud a game for not treating its users like cattle, but that's sadly the world we live in. Games like Loadout make me feel it's not all bad, at least.

Bottom Line: A surprisingly well crafted multiplayer shooter full of options, amusing cartoon violence, and rock solid action. That Loadout does all this, and provides a respectably balanced free-to-play ecosystem, is encouraging to see.

Recommendation: It costs nothing to acquire, and unlike other F2P games, won't hold its gameplay hostage. If you're looking for a multiplayer game that doesn't demand commitment, you'd do yourself a favor in checking it out.