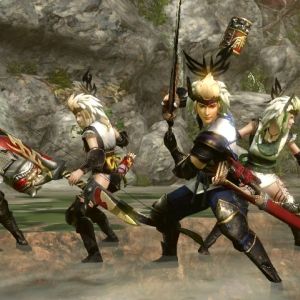 Though the PlayStation Vita still wants, perhaps desperately, for a Monster Hunter release, a good number of games have attempted to give us suitable forgeries. Ragnarok Odyssey and Soul Sacrifice have proven fine substitutes, recapturing the magic of standing at a desk and reading about ten things that must be killed, then killing those ten things within a very generous time limit, before waiting in an empty arena for thirty seconds before returning to a base of some sorts.

Yeah, these games aren't interested in changing much, are they? They're pretty good though, and many find them perfect for portable play.

Toukiden: Age of Demons is the latest Monster Hunter imitation, and like those that have come before, it sees no value in dawdling from the well beaten path. In classic fashion, you'll go to a desk to read about killing ten things, you'll kill those ten things, and then wait in an empty arena for thirty seconds before returning to a base of some sorts. And, of course, you'll have to kill one of a big thing sometimes, and that big thing will take half the Vita's battery life to defeat.

If I sound cynical, it's not because I dislike the formula. Indeed, it's perfect for portable play, and I'm a huge fan of both Ragnarok Odyssey and Soul Sacrifice. A game like Toukiden, however, exposes just how unoriginal these games have been structured by sticking so rigidly to factory standard blueprints. While Odyssey and Sacrifice had their own sense of character, with fun art styles and rich lore, the fairly humdrum world of Toukiden does little to distract from the blatantly formulaic and contrived structure of the genre. With its stereotypical characters, restricted progression, and lukewarm story, there's little Omega Force has done to stop its game being just another Monster Hunter clone.

Players take on the role of a Slayer, someone tasked with protecting humanity from the Oni - a race of demons that have mysteriously appeared and set about corrupting time and space because of some reasons. As a Slayer, one must take missions that involve killing these Oni, from small nuisances to larger and more dangerous monsters. There are also dozens of collection quests, with monsters and environments full of the usual materials that can be traded or used to craft gear.

Combat is a typical hack n' slash affair, based firmly in the tradition of methodical combat. As you input your commands, you're committed to them, unable to cancel a move once the animation has begun. It's a familiar system that encourages precision and planning, though one with frequent frustrations as monsters suffer no similar penalty, powering through the player's attacks and breaking them with knockdowns. So many knockdowns. 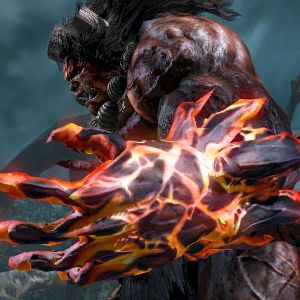 As well as hammering attack buttons, Slayers get to equip and use special abilities by attaching Mitama to their weapons. Mitama are the souls of heroes swallowed by powerful Oni, and are unlocked when that Oni is killed and absorbed by the player. Each Mitama belongs to a certain class, such as Attack, Healing, Defense, or Spirit, and bestows an increasing amount of active and passive abilities as they level up through battle. A Healing Mitama, for example, provides access to a number of regenerative spells in battle, as well as ensuring that healing abilities return more health to that player upon use.

Weapons and armor are crafted using materials in battle, which naturally involves lots of farming - especially of boss creatures, which can be huge time sinks. Some materials can only be gained by lopping off and absorbing certain body parts from bosses, too, some of which are frequently out of the Slayer's reach and take a long time to attack. It can be irritating replaying lengthy fights over and over to get the materials you need for a new sword or helmet, especially without the guarantee that you'll get what you need off the monster before it dies.

Naturally, there's both local and online multiplayer if you want to battle the Oni with up to three other players, and I have to say the allied AI does a surprisingly good job of looking after itself. I'm yet to have any CPU-controlled teammates die on me, which is a nice change of pace after playing so much Soul Sacrifice and dealing with its suicidal characters. In this regard, Toukiden does at least one thing well.

There's nothing inherently wrong with Toukiden, I should add. It just does so little to differentiate itself that it's hard not to criticize. There's nothing wrong with copying a successful formula if you do something good with it, but Toukiden does nothing with it. Neither good nor bad. It's just kind of there, being everything a Monster Hunter clone is, and doing nothing to stand out from all the others.

I won't pretend I didn't have some fun with the game. I love playing these games on my PS Vita, even despite my grievances with how frustrating they can be. However, everything that can be said about Toukiden can be applied to the whole genre - the things it does well have been taken from elsewhere, as have the things it does badly. With that in mind, there are simply far better games out there that provide all this and a little bit more. Unless you've played those games to death and are starved for more, there's not much to keep you enthralled.

Bottom Line: Toukiden: Age of Demons is a solid little Monster Hunter tailgater, but it's highly unremarkable. It's simply okay, and it's not even intrigued by the idea of being more than that.

Recommendation: As if you couldn't tell from my repeatedly mentioning them, Soul Sacrifice and Ragnarok Odyssey are superior alternatives. Check them out first, and only come here if you really need more.