Developed by Retro Studios. Published by Nintendo. Released February 21 2014. Available on Wii U. 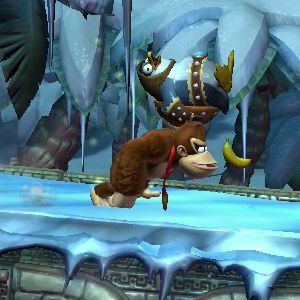 Donkey Kong Country: Tropical Freeze isn't quite the game I would have expected, but it's certainly the game we all should have expected. Donkey Kong Country Returns was a pretty solid game - it took everything we liked about 1990s Nintendo platformers and it gave it to us with a modern paint job. Ultimately, Tropical Freeze is the same thing updated to 2014. How much you love it, and how worth it the game is to you, is going to come down to how much you liked old school Donkey Kong's unique blend of rhythm, difficulty, and nigh-on-arbitrary frustration.

As with any of Nintendo's platformers over the last year and a half of Wii U, Tropical Freeze looks lovely in HD. It bears superficial similarity to how good New Super Mario Bros Wii U looked, but there's a certain extra finished gloss to it. Likewise, the level design is pure platformer gravy - it's a potent and heady blend of nostalgia and graphics. Sadly, it doesn't have the kind of fascinating and varied innovation that we've found over the last year in games like Super Mario 3D World or Rayman Legends. On the other hand, it doesn't take the kinds of shortcuts games like those took. It never mistakes novelty for challenge or difficulty. It's certainly more the kind of platformer that one would have expected to pop into their SNES and get days of frustration on difficult levels from.

Which, once you get over the controller throwing fury, is pretty much exactly what you wanted if you're looking at buying this game. 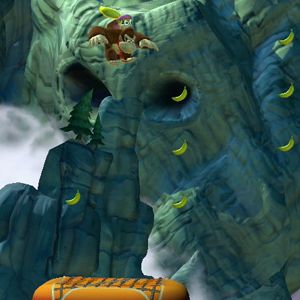 Basic gameplay is little changed from Returns. Though it's worth noting that for some reason DK feels a little light on his feet, with none of the heavy landing and handling you'd expect from not only this game, but from Nintendo platformers in general. The additional power ups from having Cranky, Diddy, or Dixie Kong riding along are enjoyable, but feel more than anything like an odd pastiche of platformer mechanics from the past. Cranky Kong's cane jumping, for example, is essentially Scrooge McDuck's pogo cane lifted wholesale from Ducktales Remastered.

That's a perfect example of the kind of staleness the game trades in. It's fun, the basic core is fun, but there's nothing fundamentally new in the mechanics either. What does feel new, though, is the sheer amount of frustration I had with some of the level design. Ropes will end in leaps of faith that have a patrolling enemy on the final platform, leaving whether you die on the landing entirely up to chance. Some sliding sections will have so many weird background effects or weather animations that you manage to miss the bananas telling you when to jump. None of it is particularly gamebreaking, nor is it something you'll fall for twice, but it's a pretty miserable thing for the game to do if this is someone's introduction to the series.

For all those frustrations, the game is plenty long with a lot of interesting levels. Though some parts can get tired by the end of that world, you never feel like you got a cool world for only a short time and didn't get the full experience out of it. The Co-Op is more than excellent, with all the easy of use and play that you'd expect from a modern Nintendo game. With one player taking on Donkey Kong and the other playing the sidekick du jour, there's plenty of variety even for players of uneven skill. Without spoiling anything, the game's secret unlockable stages are very entertaining in the tradition of being odd twists on platformer tropes.

Bottom Line: Though it fails to innovate in an engaging way, the base on which Tropical Freeze is built is solid as a glacier.