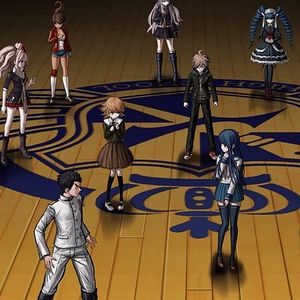 A stuffed bear is alive, and it's trapped fifteen teenagers in an evil high school, where they must murder each other to escape. If one student can murder another and survive both the investigation and trial process - undertaken by the other students - they will be free to leave while the rest of the class is executed. If they're found guilty, the class survives for another day, while the "Blackened" murderer is fatally punished instead.

This is Dangangonpa and it's as demented as it sounds. A visual novel flavored with a cocktail of energetic gameplay ideas, this series of criminal investigations carries itself with enough confidence and savvy style to draw one successfully into its otherwise ridiculous world.

It's hard not to talk about Trigger Happy Havoc without making mention of Phoenix Wright and Zero Escape, as it has quite rightly been described as a combination of the two. It's a punchy game broken into multiple stages, with an emphasis on story and a lot of time spent reading dialogue. Those who use criticisms like, "This isn't a game," liberally will not find much to entertain them here. For everyone else, there's value to be had.

As players take on the role of Makoto Naegi, they wander Hope's Peak Academy and interact with fellow students - each one an exceptional embodiment of a certain laudable trait. These "Ultimate" students are each clearly defined by their various strengths and overbearing psychological problems, from "Ultimate Moral Compass" Kiyotaka, to the "Ultimate Swimming Pro" Aoi Asahina. Most characters are likable, though a number of them fall into annoying and shallow stereotypes, to the point where the idea of them getting murdered doesn't sound so bad.

Each chapter is split into two rough phases, Daily Life and Deadly Life, signifying the moments before and after a student is murdered. Daily Life mostly consists of free time, in which players talk to one or two fellow students and learn more about them. While this is optional, and can be skipped, spending time with characters awards the player with skills and skill points, which come into play at the end of every chapter. During this time, the game's antagonist - the evil stuffed bear Monokuma - will usually introduce an extra incentive to get the students more willing to kill each other. Not soon after, death happens.

In Deadly Life, a character has been offed by one of the group, and it's down to Makoto to work out who it is. Players will examine the crime scene and take statements from witnessing students, gathering evidence as "Truth Bullets" for later use. Once players have examined everything of note, gameplay will move into the Class Trial stage, where evidence is presented, students argue among themselves, and the player tries to find lies and contradictions to sniff out the killer.

Class Trials are, themselves, split into several stages with bare hints of gameplay. The most common phase is the "Endless Debate," in which characters present their case. As they talk, their dialogue subtitles will show "weak points," highlighted pieces of text that can be shot with Truth Bullets. By aiming a target reticule over the weak point and selecting a piece of previously gathered evidence to shoot, you can shatter the character's statements and demonstrate to the class how they screwed up. 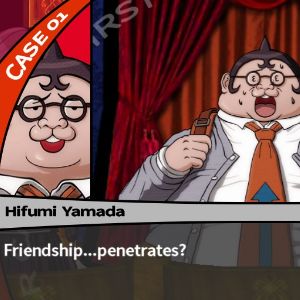 It's essentially a memory game and, like Phoenix Wright, sometimes veers into "guess what the developers were imagining" territory. Sometimes, the use for evidence isn't as conventional as players might think, and even if they used the correct evidence at the correct time, the reason might be wildly different than what the player thought. Even so, these debates are surprisingly tense, and though there's plenty of time, the fast paced presentation provides a taxing amount of perceived pressure.

Hangman's Gambit is another phase, in which players shoot letters to complete a word or phrase (yes, just like Hangman). These stages represent Makoto's attempts to remember a vital piece of evidence, and like Endless Debates, it feels more challenging than it actually is due to some very nice visual and audio design.

By far the best part of the Class Trial is the Bullet Time Battle. At various points in a trial, one character may launch into a tirade of abuse or otherwise attempt to filibuster the player. At this point, players must tap X in time with a rhythm to target words as they appear onscreen, and tap Triangle in order to smash those words and break through the opposition's denial. As battles get more complex, players will also have to contend with reloading their mental ammunition by pressing Square (all on the same rhythm), as well as dealing with enemies that obscure the onscreen tempo counter. You can also temporarily raise the tempo of the fight yourself, making your actions more effective.

These rhythmic combat sequences are a real highlight, and it's a shame they occur so infrequently. They're a lot of fun while they last.

While bizarre to experience, much less describe, Class Trials do an impressive job of representing verbal debate and mental wrangling in gameplay terms. It's also a masterclass in how good presentation can make something better than it otherwise could be. At its core, trials are fairly linear processes that don't require much thought and can often be solved through sheer trial and error. The marriage of music, writing, visual style and excellent pacing, however, transcend the mundane framework to provide something utterly enthralling.

That said, one cannot forget that this is a visual novel first, and as such, Class Trials are but one relatively small part of the overall adventure. Most of the game consists of being told the story, without much in the way of autonomy. Yes, you get to explore the school from a first person perspective, and yes, you get free time in which you choose your interactions. A vast majority of the experience, however, lies in sitting back, doing what one's told, and just going with the flow. 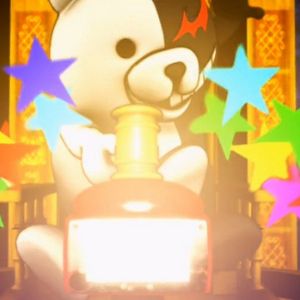 Luckily for narrative fans, Danganronpa's plot is an absorbing one, propelled along by affably realized characters and a deliciously ridiculous villain. One great strength of the writing is how, even when the outcome of a case seems predictable, there's always some totally unexpected plot twist. There were times I had a murder completely pegged, yet was still surprised by some fresh revelation that kept things spicy. Trigger Happy Havoc sucked me in more than a lot of recent games have, and it's thanks entirely to the uniquely compelling cast and premise.

All that said, there are some issues with the writing that may cause problems depending on your mileage. One cannot deny a handful of sexist and potentially transphobic moments that, while not ruining things, cast a bit of a shadow over scenes. These are things that did not ultimately wreck the game for me, personally, but they could for others, and as such, it's hard to recommend the game without at least a courtesy caveat.

Danganronpa: Trigger Happy Havoc has its issues, for sure. The less likable characters gnaw at you like bugs under the skin, and the English voiceovers are hit-and-miss, especially when one character shouts "Piece of shit" for no reason whenever his dialogue text appears onscreen. Full dialogue sequences, however, are generally solid, and there's always a Japanese option if you want to keep things faithful. Havoc also falls into a common trap of Japanese game design, whereby wordy tutorials never stop appearing. Even hours into the game, some new element is introduced along with a lengthy description of how it works. You can ignore the tutorials, but you'll likely not want to if you wish to understand whatever convoluted new idea just barged in (and should have been there from the start).

This is a great little game that has learned lessons from the most celebrated visual novels and adventure games out there, combining the best of the best to create a thoroughly rewarding murder mystery. It can be a bit too ponderous at times, and some of its investigations are more busy work than detective work, but the strength of the writing carries it forward. In any case, you won't find many more surprising games on your PS Vita this year.

Bottom Line: Often funny, sometimes shocking, Danganronpa: Trigger Happy Havoc is as convoluted as it is curious. A strange but gripping interactive crime novel, and a thoroughly unforgettable jaunt into lunacy.

Recommendation: Fans of Phoenix Wright and Zero Escape will love it, and even those who aren't normally into visual novels may find a lot to like as well. If you are, however, turned off by what is commonly deemed problematic material, you might want to approach with caution.