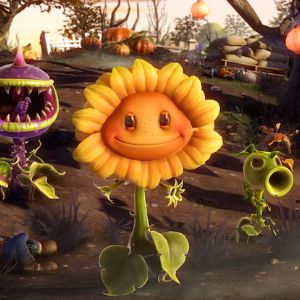 It's hard not to be cynical when Electronic Arts, a publisher known for the homogenization of its once varied game library, announces that not even Plants vs. Zombies is free from the need to turn everything into an online shooter. Nevertheless, it looked quirky enough to work, and it's hard to resist a name like Garden Warfare, even if it does hint at EA's evident obsession with one-upping Call of Duty.

There's certainly a ton of promise in a PvZ spin-off, but while Garden Warfare's concept is suitably ridiculous, the game itself proves to be a sadly pedestrian affair. Despite its comic style and silly weapons, the threadbare content leaves a little to be desired. It doesn't help that the game feels quite unpolished, bordering on sloppy at times.

Indeed, the first two hours of my time with the game were spent wrestling with a dreadful connection. Frequent error messages hampered my progress, not to mention disconnects in those matches I could gain access to. Over the course of my experience, the matchmaking issues calmed down, though disconnects were still an ever present threat, and other users are still reporting problems with EA's proprietary servers.

When one actually gets into a game, Garden Warfare is a cute, if messy, third person shooter. Up to 24 players are split into two teams - the titular plants and zombies - each with their own distinct classes and abilities. Interestingly, each team is remarkably different to play, with neither side having a truly analogous counterpart on the opposing team. While the plants' Peashooter and the zombies' Foot Soldier fulfill front line combat duties, for example, their weapons and special skills are wildly different. There are four classes per side, each armed with a primary weapon and three special abilities, unlocked procedurally as players complete in-game challenges. 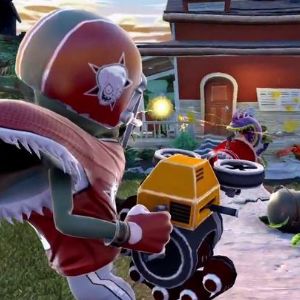 The asymmetrical team composition is a nice touch, and each team manages to be surprisingly balanced, but an issue arises if one finds all their favorite classes are on one team. I, for example, find the zombies generally boring to play, being more traditional shooter archetypes. They're armed with standard guns, and while some of their abilities are fun (such as the Scientist's various bizarre powers), they're overall nowhere near as interesting as the plants. On the plant team, we have Chompers, that can burrow underground and swallow enemies whole, as well as the Sunflower, a support character with powerful healing abilities. Zombies just can't compete with the exotic and strange arsenal sported by their mortal enemies.

Combat is essentially a chaotic scrum, with twelve players per side running around and firing their weapons in the hopes of hitting something. It's not uncommon for players to consistently block each others' path, and the sheer mass of characters on screen can often make it difficult to work out exactly what's going on. That said, making use of elevation and a little strategy can be rewarded. Soldiers and Peashooters, for instance, can reach great heights with their special abilities, and reviving teammates can actively undo the enemy's victories.

Don't expect anything as polished or engrossing as Battlefield though. Physics feel loose and weapons provide little in the way of audiovisual feedback, making for a game that washes over the players' senses while leaving nothing truly memorable in its wake. For a game with nothing but multiplayer in mind, this unrefined anarchy comes off as remarkably half-baked.

There are three game types, two of which are competitive and one of which is a wave-based survival mode. As well as a fairly standard team deathmatch, there's Gardens and Graveyards, in which the zombies must capture territory and push the plants back across a map. There are "Classic" versions of these two game types, each removing upgrades and other variables for a "pure" competitive experience. The co-op mode, Garden Ops (they ran out of good puns?), is not much different from similar modes found in a dozen other games, with four players defending their home base from increasingly tough waves of zombies. It certainly has its moments of entertainment, though. 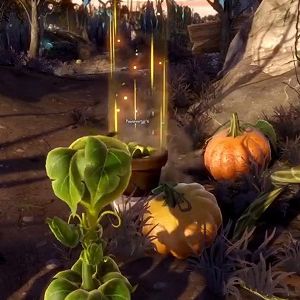 Spread across a humble selection of maps for something so rooted in competitive multiplayer, the content on offer in PvZ: Garden Warfare is pretty light. Its three modes are fairly pedestrian, unjustly mundane for such a potentially refreshing concept. In the few uninterrupted hours I could manage to secure from the game, I'd felt like I'd gotten all I could personally get out of it. Every match felt pretty much the same, and I quickly grew bored of the limited gameplay each class offered. For something that's selling itself on wackiness, Garden Warfare is depressingly banal at heart.

Popcap has attempted longevity by providing a ton of customization options. As players score kills and complete matches, they unlock coins which can be spent on a variety of sticker packs. Stickers can provide fairly cheap bonuses, such as one-use support items that can be utilized in co-op or Gardens and Graveyards, as well as more valuable loot, such as costume pieces and full character skins. It can take a lot of play time to unlock the most expensive sticker packs, and the whole system looks ripe for microtransaction exploitation. At launch, there are no incremental purchases on offer, but I would say one can safely expect to see coin "packs" for sale in the near future.

While rough around the edges and boasting its fair share of graphical glitches, there's nothing inherently wrong with Plants vs. Zombies: Garden Warfare. It's cute for a time and is gorgeous in motion, but something feels inherently "cheap" about it. It's the kind of game I'd expect to see for $15 on Steam, not packaged as a $30 retail experience. In fact, the free-to-play Loadout is more refined and energetic than what Popcap has offered here. Garden Warfare can be entertaining at times, and certainly gives Xbox One users something to do until Titanfall, but ultimately it's a forgettable little shooter that doesn't make use of the potential it has.

Bottom Line: A charming concept can only get a game so far, and Garden Warfare fails to capitalize. While there's fun to be had, there's not much meat on the bones, and the repetitive combat ensures this will be nothing but a stopgap title until better shooters enter the market.

Recommendation: If you're desperate for a new shooter and can't wait a month, you'll get something out of this. I just don't think it quite justifies its entry price.