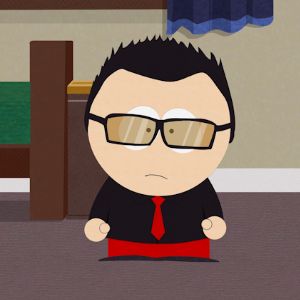 South Park: The Stick of Truth is a twelve-hour long South Park episode. Unlike most licensed games, and indeed unlike previous South Park games, Obsidian's latest effort is authentic, sincere, and uncompromising. The result is a game that truly feels like part of the show's universe. Of course, if the idea of a twelve-hour South Park episode sounds like hell to you - and it will to a great many people - then turn around and run. Run far away, because The Stick of Truth has no intention of softening the show's brutally offensive heart.

Taking place in a fully realized South Park, The Stick of Truth revolves around a live-action roleplaying game undertaken by Cartman, Kenny, Stan, Kyle, Butters and the vast majority of the elementary school kids. As the new kid, imaginitively titled New Kid (and later, Sir Douchebag), you'll find yourself drawn into a war between Cartman's Kingdom of Kupa Keep, and Kyle's Drow Elves. Each faction is fighting over the titular stick, a powerful artifact said to grant the wielder control over time and space.

Naturally, things get a little more complicated, but it's impressive how the narrative keeps up the idea of imaginative roleplaying, even when more "real" dangers present themselves. Weapons are cobbled together from the things kids have found. Healing potions are simple snack foods, while weapon attachments take the form of dead birds, zippo lighters, and other random junk. It's a cute idea, and one that could have gotten very boring over the course of the game, but Obsidian does a terrific job of weaving in just enough extra narrative to keep things fresh.

Combat is a simple turn-based affair, with a very clear inspiration taken from the likes of Paper Mario. Rather than simply select commands and watch the battle play out, players will need to time button presses in order to maximize their assaults or defend against enemy attacks. As players take on an increasing variety of bizarre enemies, they'll be able to switch in one of several buddies - Butters, Stan, Kenny, Kyle, or Jimmy - each with their own unique special abilities and attacks.

You'll get to choose between four character classes - Fighter, Sorcerer, Thief, and Jew. Most of them do exactly as you'd expect, with the slightly less obvious Jew being a cross between a traditional paladin and monk - a character based more in support abilities that becomes more powerful as player absorb damage. 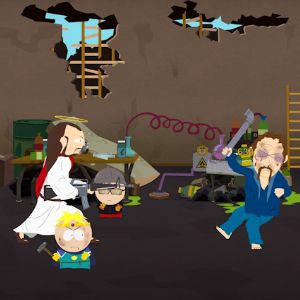 Enemies hit hard, but combat is fairly forgiving, allowing the use of potions or unique character powers alongside a standard action in one single turn. This allows you to essentially heal up or replenish Power Points (required for special abilities) for free, and is a huge boon in lengthy boss battles. By completing optional side quests, players may also gain powerful summon attacks, employing the services of such characters as Mr. Slave, Tuong Lu Kim, or Jesus to take out foes with lengthy and ridiculous moves.

Status effects are a huge part of the game. Many enemies have tough defenses that normal attacks can't penetrate effectively, and it's essential to outfit weapons with strap-ons that grant them bonus damage. Such debuffs include Gross Out, which causes puking damage and reduces the ability to heal, or Freeze, which slows down enemies. Unlike many RPGs, Stick of Truth doesn't cop out by making bosses immune to debuffs - often rewarding their use. A few enemy types have immunities to certain status ailments, but there's always something to take them down. Naturally, the New Kid and his buddy are just as vulnerable, so having a steady supply of bottled water to cleanse negative effects is essential.

Graphically, the game looks impressively identical to the show, though some may struggle to perceive the value in something that isn't laden with visual effects and powered by expensive 3D engines. Running longer than most modern games, and packed with plenty of content, I'll certainly say South Park justifies its status as a full priced game, even if the more aesthetically-driven will look at it and ask why it's not a $15 Xbox Live release. If you complete the majority of sidequests, you'll hit that twelve-hour runtime. Even blazing through the story will likely take hours equitable to most "AAA" games these days.

As I hinted at the top of this review, this is close to authentic as a licensed spin-off can get. For all intents and purposes, The Stick of Truth is South Park, and will absolutely in no way appeal to you if you've no love for the show. Needless to say, those who require trigger warnings would do well to stay away from it, because every offensive, grotesque thing you can imagine is at least touched upon. As a fan of the show, I cannot pretend I was overtly offended by the content of the game, even if it sometimes drags on a few of its gross moments to a tiresome degree. 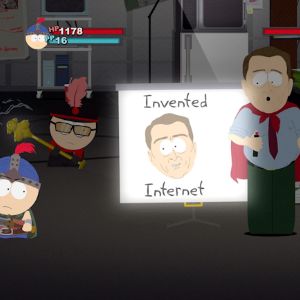 The dragging on of jokes is certainly a problem The Stick of Truth suffers from. One of the show's biggest gags is the repetition of a single idea over the course of an episode. That kind of goof works in a twenty-minute broadcast, not so much over the course of several hours. There are moments in the game that made me laugh out loud, and a number of callbacks to the TV show that worked amusingly well, but a couple of things just went on a bit too long.

Gameplay suffers from a similar issue, with the combat system not opening up very much, and the world map remaining quite constricted and small. The latter half of the adventure becomes increasingly formulaic as one works out the most effective strategies and spams them in every battle. I also don't appreciate the menu and inventory management, which suffer from a lot of wasteful clicking and style-over-usability. Having to manually strip attachments every time you equip new gear is an unnecessary pain.

While the experience is mostly a smooth ride, there are a handful of bugs that threaten to get in the way. I encountered one that impeded progress without my arbitrarily swapping out party characters and switching back, and at least one fellow reviewer had their save file wiped. It seems that, even with a game that looks as simple as South Park does, Obsidian can't quite avoid a technical snafu or two.

Even though it does threaten the player's resolve at times, The Stick of Truth is still a surprisingly enjoyable title, and the first South Park game to truly feel like it has some real soul behind it. Rather than the litany of Family Guy and Simpsons games out there, this isn't just a reel of out-of-context references to the TV show, strung lazily together in the hopes of coaxing a nostalgic smile. While there are indeed many nods to South Park episodes, they've been woven quite nicely into the plot, propelled by original content that is genuinely funny in its own right. Plus, there are just enough jokes made at the expense of videogames and live-action roleplaying to keep the geeks among the audience happy.

One could say this is to licensed cartoon games what Batman: Arkham Asylum was to licensed comic book games. Many may weep that South Park was the property to do it with, but hey, I'm not complaining.

Bottom Line: South Park: The Stick of Truth could stand alone as an extended episode of the show. Whether that's a good thing or a bad thing depends on how funny you think Trey Parker and Matt Stone are. For fans of the show, this is a seriously impressive game.

Recommendation: That should be obvious by now. Do you like South Park? Yes or no. Your answer is exactly what mine would be if you asked me whether or not you should buy it.