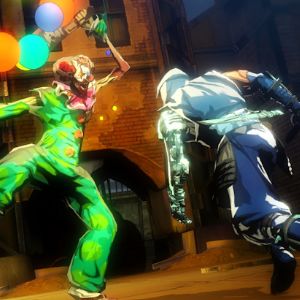 I just switched my PlayStation 3 off while Yaiba: Ninja Gaiden Z was still playing. I have not played this game to the end - in fact, I doubt I'm far past the halfway mark, if I even got that far at all. If you feel such a confession invalidates what I have to say, that's completely up to you.

However, nobody can make me play Yaiba anymore. I am never playing it again, and you can't force me.

Spark Unlimited has an amazing talent, a talent that allows it to destroy every good idea it ever gets it grasping little talons on. Turning Point: Fall of Liberty was a great idea that Spark turned into an awful game. Legendary was another fantastic premise that amounted to nothing with this studio's guidance. Spark Unlimited was responsible for Lost Planet 3, and now the company has done it again. A comedic and unapologetically trashy spin-off of Ninja Gaiden genuinely has a ton of potential, with the cartoon visuals and ridiculous gore factor promising to simultaneously mock and honor Tecmo's beloved action series. Done right, it could be something special.

Naturally, Spark's unlimited potential for ruination took all that promise and squirted out a thick dollop of pure, unfettered garbage.

With its reliance on quick-time-events and sub-brainless, imbalanced, physically sloppy combat, Ninja Gaiden Z is one hot mess of a game. The first thing one notices is just how ugly it looks. It takes a lot of effort to make a cel-shaded, comic-inspired game look bad, but the anti-aliasing is so utterly dreadful that everything looks simultaneously jagged and fuzzy. The color scheme is a clash of sickening greens and disorienting reds, with objects and characters visually bleeding into each other - a problem made worse by fixed camera angles that make it impossible to focus on any of the action. From both a technical and artistic standpoint, Yaiba is ugly as sin, to the point of proving detrimental in gameplay.

Not that gameplay ever had a chance. The insipid combat relies on lazily tossing as many enemies at once into restrictive little arenas, transforming the screen into a garbled and chaotic scrum of unhelpful color. It's almost impossible to deal with the poorly telegraphed attacks thanks to how busy the imagery is, and this isn't helped by the fact that Yaiba, our titular protagonist, is a frankly shitty fighter.

Yaiba's attacks are slow and unwieldy. He can't dodge effectively. He's unresponsive and feels like a deadweight in battle. The game attempts Ninja Gaiden's emphasis on timing, blocking, and countering, but each fight is too anarchic and the protagonist has simply not been built to deal with it properly. While Ninja Gaiden is a fluid and often elegant game of precision, this bunch of interactive gibberish serves only to damn itself with each pitiful attempt to link itself to Team Ninja's work.

Many games have "That One Enemy," a single opponent that drives players crazy. From the Medusa Heads of Castlevania to the Cazadores in Fallout: New Vegas, there are many enemy types that make a player shudder every time they appear. Ninja Gaiden Z manages to create a bestiary consisting entirely of That One Enemy. Rather than put in any effort, Spark Unlimited designed a small roster of zombies with elemental powers, then recycled them over and over again - and they are ALL utterly ghastly to deal with, featuring a bevy of unblockable attacks, irritating projectiles, and area-of-effect blasts, usually designed to knock you down, then hit you again as you get back up. Yaiba tosses these foes at the player in various combinations, and none of the combos are good. Aside from the most basic zombie combatants, every single enemy in Z is a grueling, miserable chore, the kind that makes me hate my job.

I hate Ninja Gaiden Z for making me dislike what I do for a living, even for a moment.