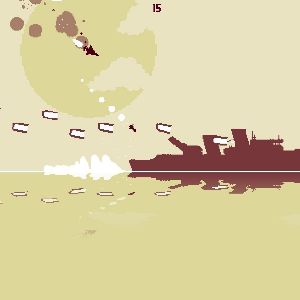 I remember vaguely playing the prototype of Luftrausers way back in 2011 on Newgrounds, a popular gaming/flash movie website, and remember it being a tough, yet interesting little distraction to spend a few minutes playing. Three years later, the game's creator - indie developer Vlambeer - has taken the original idea and fleshed it out significantly, offering up an incredibly robust, fast-paced shoot 'em up that's really hard to put down once you get going.

Luftrausers' concept is simple - You're an ace pilot, and it's you versus dozens, if not hundreds of hostile targets in a battle to see how long you'll survive and how high of a score you can rack up. Each round starts off simple, with easily dispatched fighters and the occasional gunboat, but it isn't long before Luftrausers introduces battleships, jet fighters, submarines, and rival ace pilots all eager to gun you down into the ocean below. Once this happens, the game quickly descends into a frantically-paced balancing act, where you'll be scrambling around trying to shoot everything that moves and avoiding the constant stream of missiles and bullets flying around, topped with every so often letting go of the fire button so your plane can self-repair. Suffice to say, your lifespan in Luftrausers is measured in seconds and you'll die many, many horrible fiery deaths, but the game does an excellent job of capturing that "Just one more round" kind of feeling that'll keep you coming back for more and more.

Like many arcade games before it, earning points and completing challenges is the primary goal in Luftrausers. Challenges depend on which plane part you have equipped, and range from simply killing X number of enemies to more difficult tasks, like killing X number of enemies while your plane is on fire. Completing challenges and accumulating a certain number of points will unlock additional parts you can use to customize your fighter plane, as well as bonuses like different color schemes so you can change from the default tan and red graphics into something more colorful (or monochromatic). The only major problem is you'll find yourself hitting a wall with some of the tougher challenges that may require you to destroy a type of enemy that only appears after you've been alive for several minutes, or requires you to max out your score multiplier first - no easy feat. It can take a lot of luck and skill in order to surpass the end-game challenges, and here's where you'll most likely start burning yourself out with Luftrausers. It can get a tad aggravating, after several hours of play, to still be stuck on a single challenge that you just can't complete despite your best efforts.

The various plane parts you'll have at your disposal to customize your fighter, providing a good mix of different abilities and ways to switch up your play style. You can swap out the default machine gun for a high powered laser beam or change out your engine so that you no longer take damage when hitting the water (at the cost of acceleration). Through additional challenges, you're encouraged to alternate between the various components available to try and unlock even more parts and rack up higher scores. It's really cool to see what kind of crazy combinations you can come up with and just how effective they are in combat once the bullets and missiles start flying. Luftrausers even has clever names for the multitude of combinations of fighter planes you can construct, like "Warturtle," "Billy 40" and "Hummingbird."

Bottom Line: Despite a few issues with its end game challenges, Luftrausers is a surprisingly addictive, challenging arcade game that will keep you glued to your Vita for game after game after game.

Recommendation If you hold any nostalgia for old-school shoot 'em ups or are in the mood for a fast-paced, arcade-style game, you definitely owe it to yourself to pick up Luftrausers.