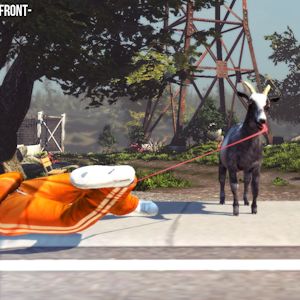 Goat Simulator is incredible. It's awful, and it's insulting, but it's everso slightly incredible at the same time. The game's own developer derides it, claiming the $10 it costs could be better spent on a bunch of bricks, and suggesting it'll be worth picking up in a two dollar sale.

There is an interesting question to be had with Goat Simulator - when does pointing out one's own flaws cross the line from charmingly self-deprecating to conceitedly galling? Satirizing bad game design is something that games regularly fail at, because they fall into the trap of simply being the thing they're mocking. Roleplaying games that make fun of obligatory "killing rats in the basement" quests are simply hypocritical if they point out this cliche by making you go through with such a quest. The Simpsons Game was full of commentary about lazy game design, but went ahead and packed its levels with the same uninspired block puzzles and platforming sections it lampooned. It's hard not to feel insulted by games that do this, games that are self-conscious enough to brazenly admit what they're doing is lame, but can't be bothered to find a way around it.

Coffee Stain Studios is clearly having fun with the idea of knowingly selling a bad product. It proudly lists bugs as a feature, promising only to fix glitches that outright crash the game, leaving in everything else for hilarity's sake. With its bizarre physics and distinct lack of structure, one could make the case that Goat Simulator has a point to prove, providing a savvy commentary on the state of videogame design - not to mention the temptation of the modern game developer to make bizarre, "random" experiences simply to appeal to YouTube's Let's Play creators. In fact, the cynic could easily argue that this game exists entirely to exploit that medium, while others may say it's all done in the name of satire.

All I know is, you get to use a jetpack. As a friggin' goat.

The basics of Goat Simulator are as simple as simple gets - you are a goat, and you smash stuff up. Clicking the mouse as you run about causes the goat to smash things in his path, and pretty much everything exists to be smashed. From fences, to greenhouses, to cars and people, you're required to bash, explode, or otherwise ruin whatever you can get within bleating distance of. Essentially, that's the whole point, and there's very little to worry about beyond that.

Of course, there are minor things to keep you temporarily invested. The goat can "lick" things, its tongue latching onto objects and people that can then be dragged around the map. There are secret areas in the game which confer special abilities upon the careless capra, such as the aforementioned jetpack, or the ability to assume demon form. There are also little golden goat statues to uncover, for no real reason in particular.

This lack of reason is a running theme throughout the experience. You rack up points as you destroy things, and can bash objects in quick succession to keep a combo meter running - but for no real quantifiable end. There are challenges, such as causing certain calamities to occur, or pulling off flips in the air, and they also award the player with worthless points. Nevertheless, there's a certain joy in earning a meaningless reward for pulling something off, especially as they're often accompanied by flashy text with such celebratory phrases as "Michael Bay" or "Fuck The Police," signifying that you have accomplished something - and I use the word "accomplished" loosely.