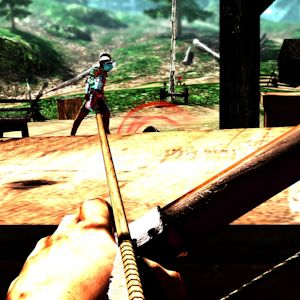 While there's no leveling up to speak of, new weapons can be bought in each area, with the longbow, shortbow, crossbow, pistol and musket coming in upgraded varieties and purchased with that aforementioned loot. Of course, with 17th century armaments mostly all sucking, it's worth focusing exclusively on one's bow of choice, purchasing upgraded variants as well as purchasing quivers to hold more arrows at a time. Up to three charms can also be equipped, adding passive abilities such as enhance speed, better melee damage, or extra hit points. While weapons can be recovered from monsters, their poor quality means they're better off being sold in exchange for more loot, with which you can buy superior alternatives.

Being able to swiftly navigate the map, rather then sneakily crawl around it, becomes more of a necessity than a preference, as Betrayer grows disappointingly formulaic before too long. Each new area of the world plays out in pretty much the same way - you find the bell and hang it up in the daylight, then run around at night to talk to NPCs, pick up objects, and talk to more NPCs. Along the way, you'll find hidden pages of backstory to read, corrupted totems to cleanse by killing a certain amount of enemies, and treasure chests full of loot, but there's nothing "new" to do in each map. There's no "investigation" in each investigation, you just run back and forth and let the story tell itself.

Betrayer gets away with its repetitive nature somewhat thanks to its atmosphere. Each area of the island is effectively haunting, with a great use of sound and visuals to create a beautifully bleak little world. Monsters are bizarre and creepy, while each story is fairly well told. Players find their way around the world by using sound to locate the next important person or object, pressing a button to create an echo that gives away the destination. It's a really cool way of the navigating the island.

The excellent visuals are also highly impressive. While the nighttime world is always monochrome with some splashes of dark red, one can choose whether or not the daytime island is similarly in black-and-white or full color, and both options have their merits. The black-and-white look is punctuated with bright reds on enemies and objects, and looks stylistically lovely, while the contrasting and lush full-color version is simply gorgeous to behold. Some may find the color contrast a bit too high, but the visuals can be fully customized in-game to find the balance that's right for you. This is punctuated by a beautiful effect of wind blowing through the grass and trees, which looks breathtaking in full color.

Sound design is less consistently remarkable. General atmospheric sounds and audio cues are very nice indeed, but some of the stock sounds of enemies (especially the cartoon "clang" noise when hitting the Spaniard's armor) are just silly, while the lack of any voice acting is starkly odd in a game so based around using the players' ears. The spotty audio reeks of placeholders and makes the game overall feel unfinished.

Despite its setbacks, Betrayer manages to remain a surprisingly enthralling adventure. While at times I got a little tired of the backtracking, especially toward the end, I was still sufficiently drawn into the game's mysteries, and found the combat to be especially enjoyable in spite (or perhaps because) of its simplicity. It's not an outstanding game in any one department, but it's an overall pleasant little title with a lot going for it.

Bottom Line: It could have done with being ten dollars cheaper and two hours shorter, but Betrayer is a beautiful looking title with a compelling atmosphere and enjoyably tense combat.

Recommendation: One may want to wait for a sale before jumping in, but if you like games with spooky atmosphere that manage to be a little different within conventional frameworks, Betrayer may have you sorted.