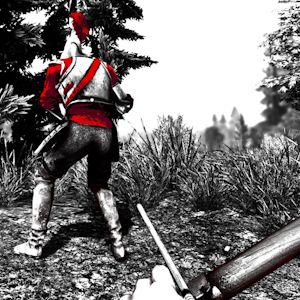 It's difficult to put Betrayer in an appropriate box. It's laden with horror elements, but one is hard pressed to label it a horror game. It focuses on storytelling and features some character progression, but role-playing doesn't seem a fitting genre. While there is sneaking and ranged combat, neither the stealth nor first-person shooter categories work. Betrayer takes a little content from many genres, but never enough to settle in one.

Despite this, however, the ex-Monolith employees that make up Blackpowder Games have based Betrayer on some fairly conventional gameplay, despite what first glances might tell you. While its stylized black-and-white visuals and obfuscating narrative initially remind one of Gone Home or Dear Esther, Betrayer quickly gives itself over to a fairly predictable pattern of fetch quests and shooting at skeletons.

As the unnamed protagonist, players wash up on a mysterious island oppressed by strange phenomena. Monstrous versions of pre-industrial Spanish soldiers stalk the pathways. Whooping men whose bodies crackle with fire dart out of the forest, shortbows in hand. The player's only ally is a mysterious girl (not Peter Andre's one) who has no memory of who she is or why she cannot leave the island.

Betrayer's world is separated into two distinct halves. According to the mysterious girl (not Peter Andre's one), the Sun never sets, but players can enter the nighttime version of the island by finding bells in each location and ringing them. The daytime version of the world is populated by Spaniards and Burned Men, while the night is patrolled by skeletal beasts and houses ghostly NPCs known as wraiths.

Most of the adventure is spent in the dark and monochrome night world, as players ostensibly become the little boy from Sixth Sense - a paranormal grief counselor working out what happened to each wraith while it was alive and helping them come to terms with their miserable pasts. The island is split into sections, and each section has its own tale of death and treachery, which the player works out by digging up clues, talking to ghosts, and uncovering the fate of the former island inhabitants. Each story is fairly depressing, and very few of the characters reveal themselves to be likable - from traitors, to murderers, to rapists, every new story unveils a new web of seedy secrets.

While investigating each ghostly tale, monsters must be contended with. The game itself tends to encourage stealth, warning players that they can move with the wind to cover their footsteps, and take enemies out silently with a bow. This is possible, and may save one's hit points in the long run, but it's actually far quicker to simply take opponents out head-on. There are pistols, muskets, and crossbows with which to deal mighty damage, but the longbow is really the only weapon you need, able to fire far quicker than the realistic guns (realistic meaning they take forever to reload) and allowing for the retrieval of precious ammunition.

Enemies hit hard, and tackling more than one at a time is fairly dangerous, but once one gets used to the bow's physics, and learns when to move and when to fire, one finds that the beasties drop easier than you do. Should you die - and it's always very possible - you'll drop your loot, and will need to recover it on your next respawn or lose it forever. Customization of experience means you can, however, alter the deadliness of monsters or altogether eliminate the loot drop system - which may save less skilled players a lot of frustration, given how expensive it is to buy items and how frugal with the loot Betrayer can be.