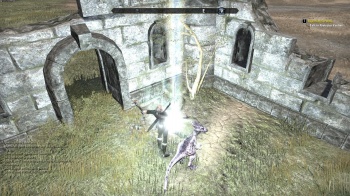 No MMO would be complete without some kind of crafting to while away the time between quests, and outfit yourself with custom gear suited to your character's talents. While the first 20 levels certainly lay the groundwork for an amazingly robust crafting system, the fact is that unless it's your primary focus, you simply won't get very far along in your professions. You can collect every piece of crafting material node you see, break down every piece of gear you find, and loot every container, and you'll still only get through a handful of levels in any given profession. That's not to say that the crafting is bad by any means - it's one of the most fully fleshed out crafting systems you'll find - but the first 20 levels worth of crafting are just not terribly exciting. It's also an incredibly space-intensive hobby. You've got such limited backpack space that if you do try to be the jack-of-all-trades crafter, you'll find yourself with a full bag and full bank very quickly.

PvP is often reserved for the end game, but TESO welcomes you to the PvP area, Cyrodiil, as soon as you hit level 10. Unfortunately, although my experience was limited to 90 minutes or so on one server, it was a ghost town. Whether people prefer PvE content, or are just focusing on hitting max level for the time being, I didn't see a single enemy player in over an hour of "PvP." There's more to do than just fight other players, though. There are mines and farms to commandeer, there are strongholds to capture, and even siege warfare to participate in. Of course, these are all more fun with other players, so the fact that even the most populous faction was ill represented in Cyrodiil during my time there, it might be best to group up before hand, rather than just jumping in and hoping for the best. The PvP has huge potential, and likely just suffers from a combination of too many servers and too few participating players. The fact that you can participate in massive scale combat, lay siege to a stronghold with catapults and trebuchets, and strategically cut off your opponents' supplies at the source by taking over a valuable mine has all the makings of a very viable source of end-game entertainment. For the first 20 levels, though, you won't be missing much.

Despite a remarkable level of polish throughout the game, you'll still encounter the occasional glitch or unexpected server downtime. You'll run into quest NPCs that just don't respond to you, forcing you to either come back later when they feel like working, or restart the quest completely. There are a couple of missions which have you challenging soldiers to duels, only they'll occasionally get struck with Hive Mind, so beating one disables your ability to duel any of the others. Other than a Crossfire-related client crash - which was easily enough resolved, no thanks to the lukewarm, but always in-character Support Team - I didn't run into any game-breaking bugs, though. Given the breadth of the game, this is actually quite an accomplishment. With as many moving parts as there are in TESO, it's a small miracle that there aren't more prevalent and impactful bugs, and by any account, this is one of the best examples of how to launch an MMO.

As before, The Elder Scrolls Online is a genuinely fun experience, but you shouldn't go into it expecting a traditional single player RPG, nor a traditional MMO. It straddles the line between the two so thoroughly that it's difficult to liken the experience to one or the other specifically. You'll see other players in the world, but you'll rarely feel connected to them in any meaningful way unless you join a guild. Despite the overarching world conflict, they don't feel like comrades in arms against common foes. This might be in part due to the very "you alone can save the world" main story quest, which doesn't really lend itself to outside assistance. Sure, you can team up to delve into a dungeon or go PvP in Cyrodiil, but with the primary focus of the early game being the single player experience, they feel more like henchmen than colleagues, and I expect you'll feel much the same to them. 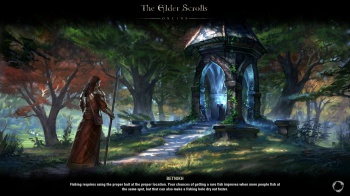 Levels 1-20 - roughly 25-30 hours of gameplay, depending on how focused you are on leveling - in The Elder Scrolls Online offers a lone wolf, exploration-focused pseudo-MMO. It's as single player as you can get on a server with hundreds to thousands of other players, and it's a very Elder Scrolls experience to boot. From the fully voiced quest dialogue to the build-your-own tankmage skill system, the freedom you have in TESO is both a blessing and a curse. While it's really nice to be able to use every upgrade that drops, you'll often find yourself wishing for a destruction staff when bows have been dropping exclusively for hours. Leveling up and morphing your class skills is a bit of a slow process, but it is incredibly fulfilling to see your fun-size Imp turn into a big, bad Clannfear. Crafting is almost too robust to really get a good feel for it in the first 20 levels, but the system is clearly a frontrunner in customizable kit creation. Unfortunately, you might run into a situation where the PvP doesn't stack up, but that's likely a result of the situation than the systems. The siege engines and command point structure of Cyrodiil looks like it will be able to offer countless hours of manic PvP action, once the servers have been trimmed down or filled up.


Bottom Line: The Elder Scrolls Online is a ton of fun in an outside-the-box sort of way. It can't seem to decide whether it wants to be single player or MMO, so be prepared for some in-between weirdness, but nothing that really detracts much from the experience. Between Guilds, crafting, PvP, and dungeons, it has all of the makings of a solid MMO.

Recommendation: Just the first 20 levels is almost worth the box price, but whether the subscription fee is worth committing to is still up in the air. It's not the be all end all of Elder Scrolls by any means, but it's an enjoyable experience with few serious issues. If you like Elder Scrolls or MMOs, take it out for a spin. As long as you can commit a couple hours a day to it, you'll more than get your money's worth in the 30 days that comes with the purchase.