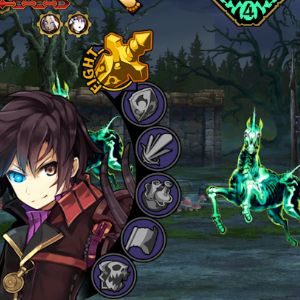 Demon Gaze is a cruel game indeed. It lures prospective victims in with a silly sense of humor, affable cartoon visual style, and overall lighthearted premise. Its opening dungeon crawl is a cakewalk, and it's hard not to feel powerful as one trudges through a blasted city, stomping on goblins with ease.

Then the first real challenge appears and, if the victim is not prepared, they are mercilessly annihilated. Needless to say, no player ever makes the same mistake a second time ... though plenty of new mistakes are ripe to be made along the way. Despite initially looking like one of the more accessible dungeon crawlers of its type, Demon Gaze is nothing to be taken lightly, and that's certainly not a terrible thing.

As is common for the wandering hero type, players have been found with no backstory and even less memory, uncovered in the ruins of an ancient, monster-infested castle. Dragged back to the castle's one safe haven, an inn run by a money-hungry enigma called Fran, players are quickly drafted into service as swords-for-hire - gifted with the unique ability to trap power demons with a special funny eye. Of course, nobody's running a charity - every time the player returns to the inn after a hard day's dungeoneering, they're expected to pay rent - a price Fran jacks up each time.

Like many Wizardry style dungeon crawlers, Demon Gaze is a grinding game of taking two steps forward and one step back, something for only the most dedicated of players. Enemies hit hard, the need to keep making money is a constant pressure, and it can take a long time to level up enough to handle the all-important demons and advance the plot. As well as paying rent, players must fork over an increased fee every time they want to add a new member of the adventuring party, and it takes quite a while before selling loot or securing gold in battle becomes anything close to lucrative.

This is a game with little interest in breaking the mold. If you've played classic titles like Wizardry, or experienced more contemporary offerings in Legend of Grimrock and Paper Sorcery, then you'll dive right in without missing a beat. Dungeons are explored from a first-person perspective, and the map is broken up into a grid, with players moving one square at a time. Random encounters involve turned-based combat against monsters and allies arranged into rows, and a tactical use of character classes is crucial to getting ahead. Naturally, hidden paths, optional objectives, and secret items are dotted all around each map, with exploration often leading to rewards.

The general objective in each environment is to defeat the resident demon. This is done by capturing eight circles strewn about the map, forcing the boss to come out of hiding. To capture a circle, one must use gems, which come in various shapes according to the kind of loot they attract. For instance, if you place a shield gem on a circle, one of the monsters you defeat will drop some shield equipment. Up to three gems can be placed and, as you might have ascertained, such placement leads to a battle. Once the battle is won, loot is gathered according to the gems used, and the circle is free to use as a save point.

Should one defeat a demon, the boss is captured and can be equipped like some sort of ghastly Pokemon. Each demon possesses its own unique abilities and traits, conferring a passive bonus on the party - the stalwart Chronos raises defense, for example, while the powerful Mars boosts attack strength. As well as passive help, Demons can be "opened" in battle, acting as an autonomous party member with its own attacks. A gauge depletes for every turn in which a demon is active and, when empty, it causes the demon to flip out and attack the player. It's wise to put demons away before this happens, obviously.

In between dungeon crawls, players can hang out at the inn, using item and weapon shops to buy and sell loot, the basement to strengthen gear and resurrect slain party members, and the bulletin board to take on optional quests. This is also where one rents new rooms from Fran in order to create a fresh party member. Up to four characters can accompany the Demon Gazer, either randomly generated by Fran or personally created from a standard list of races, classes, and character portraits. All I will say is, a healing class is paramount - as is a Healing Staff, because MP gets hard to come by when you're out in the field.