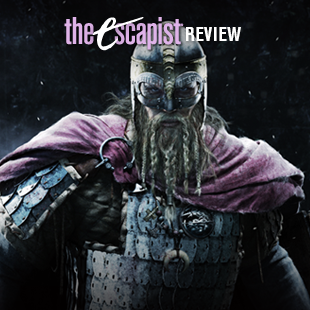 I never played 2012's War of the Roses, so Fatshark's follow-up, War of the Vikings, took me a bit my surprise. If you're not familiar with the concept, imagine Call of Duty: Medieval Warfare. You play on a team of Vikings or Saxons, running around, trying to hack and slash your enemies to death before they hack and slash you to death. It's quite exciting for such a simple sounding premise, but many core design decisions are working against the well being of War of the Vikings.

The description "Multiplayer Close Quarter Combat" sums up the nature of War of the Vikings quite well for the most part, assuming you're willing to overlook the seemingly overpowered bow and arrow, and various thrown weapons. The only single player portion is the tutorial where you learn to swing a sword and parry an attack. Once you've got the basic controls, you're off to the multiplayer mayhem. That's not to say you'll be proficient with the basic controls immediately, however, as the learning curve is much steeper than you might expect thanks to a seemingly senseless control scheme.

The first thing that struck me as being horribly awry was how you swing your weapon. Click and hold the left mouse button to charge up your attack is a reasonable enough start. When it comes time to swing, however, you have to swipe the mouse either left, right to swing from that direction. Therein lies the problem. Mouselook is always on in War of the Vikings, so making an attack necessitates you look away from your target when you swipe left or right to launch the attack. Obviously, when you're looking away from your target, you're probably not going to hit them, so you'll try to swing your target back into your sights during the animation, which leads to a whole lot of wild flailing.

Speaking of flailing, you can, in theory, parry your opponent's strikes, too. The mechanic is the same for swinging and parrying, so you have to look away from your assailant in order to activate your parry, which in turn makes you fail to parry the blow more often than not. Of course, both attacking and parrying are things you can eventually acclimate to, but it begs the question of why this mechanic would be implemented at all. This is the crux of the obscene learning curve to succeed at melee combat in War of the Vikings.

Unfortunately, the mechanics aren't the only thing wrong with War of the Vikings. The community is reminiscent of what you'd find in an overly competitive match of League of Legends or DOTA 2. You'll see a deluge of racial, homophobic, and misogynistic chatter, punctuated on occasion with inane remarks about "noob axes." You'll likely be chastised for running too eagerly into combat one second, then again moments later for being a coward. You can save yourself some trouble and offense by simply ignoring chat entirely, as you'll likely never see anything of any value come out of it. Granted, this may be out of the developer's control, but it worth mentioning since you really can't escape it in a multiplayer-only game.