Developed by HAL Laboratory. Published by Nintendo. Released May 2, 2014. Available on 3DS. 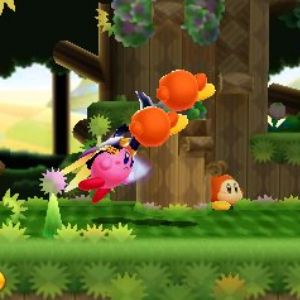 After a bunch of spin-offs and weird twists, after turning into yarn and splitting himself into ten tiny clones, it's nice to see Kirby returning to his roots. Games like Kirby's Epic Yarn and Kirby Mass Attack have been utterly fantastic, don't get me wrong, but seeing the Pink One enjoy a classic adventure with Return To Dreamland was a real treat. There's an elegant simplicity to a good old fashioned Kirby game that just really hits the spot.

If Return to Dreamland was refreshing in its traditionalism, Kirby Triple Deluxe is truly a homecoming. HAL Laboratory's little round sucker got his start in the handheld market after all, so playing a purer platformer on the 3DS just feels right. It does, of course, help that Triple Deluxe is a ton of adorable fun.

Like Return to Dreamland before it, Triple Deluxe dispenses with excessive gimmickry, for the most part, providing instead a more familiar platforming experience along the same lines as Kirby Super Star and its ilk. The titular puffball will be expected to run, float, and suck his way through a variety of sidescrolling levels, ingesting enemies and copying their abilities, tackling bosses, and uncovering secret routes to unlock hidden bonuses. This time around, a magic "dreamstalk" has lifted Kirby's house into the clouds, and King Dedede has been kidnapped by a nefarious entity. Not exactly the complete works of Chaucer, but a good enough excuse for Kirby to get out of the house again.

Triple Deluxe does everything a good Kirby game is supposed to do. It's not particularly challenging, but it remains fun throughout, with the difficulty being more in finding hidden items, such as collectible keychains, or the Sun Stones dotted throughout each stage that unlock each world's final boss fight. A range of classic Copy Abilities return, including Sword, Ice, and Beam, joined by a modest selection of brand new powers, all of which are delightful in their own way. Such introductions include Bell, which allows Kirby to ring a pair of golden bells and damage enemies with their soundwaves, and Beetle, a new favorite that gives our hero the chitinous horn of a dynastinae, allowing him to charge and impale opponents, as well as fly through the air more gracefully. There's also Circus, which players can use to jump through flaming hoops and juggle, and Arrow, which boasts a number of archery skills and boasts more versatility than the Cupid power of previous games.

The new abilities fit in nicely with the wider range of powers, but feel far more imaginative, each one boasting an expanded moveset and looking just that little bit more impressive. As fun as it is to play with older powers like Cutter and Wheel, I got infinitely more excited every time I saw an insect-like enemy or a misshapen bell creature, because the fresh powers are never not fantastic.

Speaking of new powers, Kirby gains access to an almighty new state of being at various points in the game, Hypernova. By collecting a Miracle Fruit, Kirby's inhaling skills are improved a hundredfold, allowing him to suck up giant enemies, trees, rocks, and other bits of scenery into his ever-waxing maw, before swallowing it all in a massive gulp. While this power can be used to drag large objects around the map and get through a level in inventive ways, the real joy of Hypernova is watching enemies scrabble and scrape, attempting desperately to claw their away out of the vortex. It's pretty damn dark, especially when you watch, in grisly detail, as a large snake-like monster is slurped into Kirby's Tardis-esque gob at a speed just slow enough for you to realize said creature understands every horrible thing that's happening to it.

Also, Kirby looks simply darling when sucking down trees. I grinned from ear to ear the first time I got to see those animations.