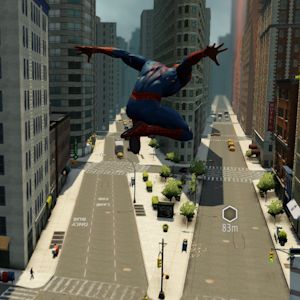 Thanks to a perpetual exploitation of the beloved web-slinging mechanics in Spider-Man 2 on the PlayStation 2, Spider-Man games have managed to get away with being pretty damn likable in spite of whatever other problems they may have. In recent years, developers have also begun to incorporate elements from Batman's Arkham games, tying Peter Parker's famous Spider Sense into counter-heavy combat and predatory stealth sequences.

Until now, the setup has worked pretty well for the Wall Crawler, but you can only keep going back to the same well so many times before it runs dry. It looks like The Amazing Spider-Man 2 is that one trip too many, dipping its bucket in and coming up empty. While not an especially terrible game, especially in the subgenre of rushed movie tie-in games, after so many spandex-clad visits to New York City, not enough has been done to keep things interesting. Beenox has certainly tried to spice things up, but Amazing 2 is ultimately too restricted to make good on its promise.

As is custom with Spider-Man movie games, the story of the actual film is ancillary to a more original plot. While Electro and the Green Goblin put in their obligatory appearances - in fairly awkward, shoehorned ways - the plot revolves primarily around Parker's dealings with three other villains - Kraven, Cletus Kasady, and Wilson "The Kingpin" Fisk. Parker must deal with this loose association of bad guys, as well as a run-in with Black Cat, in a game that wishes desperately to be the true Spider-Man equivalent of Arkham Asylum, but cannot escape the bonds of Sony Pictures and its pre-packaged, Hollywood-friendly world.

The attempt to tell an original story without the movie's villains is admirable, but the result is disjointed. As I noted, the appearances of actual movie-inspired events becomes awkwardly forced, while the original stuff is kept in check thanks to a need to keep in theme with Sony's "everything is now Oscorp's fault" metaplot. The origin story Beenox tries to tell with Kasady is a prime example of how detrimental this balancing act proves - I won't spoil it, but suffice to say everything is now Oscorp's fault.

As a game, there's nothing Amazing 2 does that the first Amazing Spider-Man game didn't already do, and any slight tweaks to the formula have not been for the better. For example, there are plenty of optional crimes to solve, from beating up thugs to throwing bombs into the river, but they are unbearably repetitive and the game tries to force you to keep doing them, lest your "Hero mater" drain and Fisk's Task Force hunts you down with anti-Spidey gadgets. Repetition is a huge problem for the game overall, with combat that never advances beyond entry-level Arkham button mashing, and incessant dialog from Parker that regurgitates the same unfunny phrases over and over again.

One thing the game tries to do is put more Peter Parker into the game, introducing sequences where you talk to other characters as an innocent Daily Bugle photographer. The reason why Peter Parker isn't in most games is because playing as Peter Parker isn't, well, fun. The Parker scenes are pretty dull, based around walking in small environments, chatting to a few people, and maybe taking a photograph or two. What is being used as a unique selling point is really just a shallow time waster.

This is the consummate "okay" game. It is perfectly suited to wasting a few hours of your time, but it's lacking in ambition and packed with unremarkable, generic content. There is remedial satisfaction in hitting all the buttons to make Spidey do all the punching, but there's absolutely nothing worth remembering once you've had your fill - and if you've played any previous Spider-Man game, you'll likely have seen enough within the first hour.

None of this is helped by the game's awkward camera angles and dodgy physics, both of which make navigating the city more of an annoyance than a thrill. Trying to get Parker to sprint up the side of a building without careering off to the side or the camera going utterly nuts seems like a case of dumb luck, and the need for buildings to keep the web-swinging going may make logistical sense, but it doesn't make for a particularly fun or fluid game mechanic. Those moments when you're at the right height and have the space to flow through the air are as satisfying as ever, but that satisfaction is always punctuated by something that just feels uncomfortable to control.

I will at least admit that many of the bosses are quite cool. Though most of them rely on obvious patterns, and do little to shake up the combat to any great degree, there are some legitimately cool setpieces on offer, especially the battle against Green Goblin, which sees players tackling Osborn atop his glider and smashing him into buildings.

Graphically, the game looks fine, failing to impress but at least not utterly offending my eyes. Character animation is excessive, however, with Spider-Man in particular flailing his arms wildly about like he drank five cans of Monster before getting out of bed that day. As for the voice acting and soundtrack, can you guess what I am going to say about it?

Bottom Line: The Amazing Spider-Man 2 is serviceable, and serviceable is as good as it gets. Competent, with admirable attempts at original storytelling, this movie tie-in is the perfect example of a middle-ground title.

Recommendation: If you loved the movie and need more, this will give you some inoffensive entertainment. It's not worth more than a few hours' time at best, though.