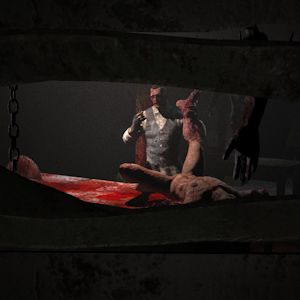 It's not often one finds downloadable content more story-driven than the game for which it's been released, but Outlast's Whistleblower installment is certainly that. Set before, and then during, the events of the main game, Whistleblower tells the story of Waylon Park, an employee of Murkoff trying to expose the company's evil shenanigans at Mount Massive Asylum.

Naturally, Park's titular blowing of the whistle is rumbled, and he's committed to the asylum as punishment. Unfortunately for everybody involved, this is just moments prior to the inmates running rampant, and Park finds himself trapped in the complex with its murderous denizens. Our plucky little tattler soon finds himself a video camera, because that's the conceit of the game, and tries to escape with his limbs - and penis - intact. Oh lord, the penis.

As with the main title, Whistleblower is a game predominantly about hiding from homicidal maniacs, sneaking around in the dark to avoid their gaze, running and hiding when required, and searching for the occasional key. A few familiar faces turn up, with some enjoyable narrative callbacks, but the bulk of the experience involves new crazies and fresh environments.

Replacing Dr. Trager, The Penis Brothers, and Chris Walker are two more recurring stalkers - a cannibal armed with a circular saw, and The Groom, one of the creepier characters you may hope to see in a videogame. I won't spoil his particular flavor, but suffice to say that men everywhere will be shuddering every time they recall this particular bad guy's scenes.

The Groom is a fun new addition, but neither he nor the cannibal are quite on the same level as Outlast's previous villains - it's hard to top a bad guy like Trager, and despite the quasi-prequel nature of the story, he sadly puts in no living appearance. Despite this, however, there is no denying how intimidating these bastards are, and keeping out of their violent clutches is as fun - and terrifying - as ever.

Level design is a bit more obfuscating this time around, with an increased sense of verticality as paths open up on higher ledges and walls. This makes getting around the asylum a little trickier, as it can be easy to miss the gaps in the walls where the player is supposed to go. A few times, I found myself wandering hopeless before accidentally stumbling on the one bit of wooden planking that signified a climbable area. While the environments themselves are a bit more varied and interesting, the layout of them provide regular irritation.


Whistleblower offers an interesting added perspective on the story and provides some fresh insight into Murkoff as an overall antagonist. I was quite impressed with the increased focus on narrative pacing, something that was much more of an afterthought in the original game. With a much more definitive beginning and ending, Whistleblower actually feels a bit more like a story campaign and less like a haunted house ride. For those who want to find out more about Mount Massive, this is a must.

That said, the DLC ultimately provides more of the same from a gameplay standpoint. This is hardly a bad thing, considering Outlast was a serious game of the year contender for me, but I will admit that, after the well structured opening minutes of Whistleblower, it was a little bit disappointing to go back to the usual routine. It's all good stuff, as atmospheric and disturbing as ever, but one is always left expecting just a little bit more.

Bottom Line: Outlast: Whistleblower isn't quite as memorable as its parent game, but nonetheless provides plenty of grisly encounters and tells a more complete story.

Recommendation: Outlast had its detractors, and they won't be swayed by more of the same. The game's many fans, however, really do need to pick this up.