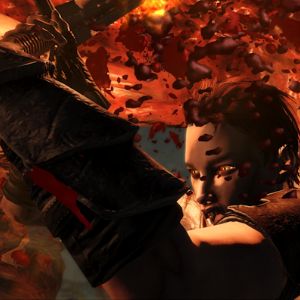 I have an eternal soft spot for Spiders, the studio known for such curious roleplaying games as Mars: War Logs and Of Orcs and Men. There is no denying the passion and ambition this company has - it crafts intriguingly original worlds and works damn hard to fill each one with a sense of depth and history. In terms of both narrative and gameplay, Spiders' games take cues from the best in the business, blending the work of BioWare, Obsidian, Bethesda, and others, while adding its own eccentric and recognizable flair.

Yet for all of its heart, Spiders makes mostly shambolic games that ultimately frustrate more than they please.

Bound By Flame is yet another perfect example. It's a game with soul, one that truly believes in what it's doing and bursts with invention and vigor. Its story is barmy, but pleasantly so, and its combat system is an absolute pleasure to experience when it works correctly. Sadly, Bound By Flame is also poorly structured and technically sloppy, with a difficulty scale that verges on schizophrenic and a myriad tiny annoyances that eventually overwhelm the player's senses. So yeah ... it's a Spiders game through and through.

Set in a world that verges on apocalyptic, this hard fantasy adventure revolves around the Freeborn Blades, a mercenary company serving as one of the last bastions of humanity in the face of an undead army. The Deadwalkers crawl across the land like a plague, led by the mysterious Ice Lords, but the tide is due to turn when our player character is possessed by a demon. This demon bestows fiery powers upon its host, but at a potentially terrible cost, and then there's a witch who is clearly Morrigan from Dragon Age, but SO isn't Morrigan from Dragon Age.

The story makes absolutely no sense, but is just deliciously stupid enough to be enjoyable regardless. There's tons of it, too, if you want to enjoy all the optional dialog with NPCs. A good job has been done to create a full-fledged world that, while intensely derivative, manages to feel believably fleshed out. The voice acting is of variable quality, to put it politely, but the music is fantastic, and the art direction is pretty damn good.

Combat is in real-time, and based around two distinct fighting styles - Warrior and Ranger. In Warrior stance, players battle with a shield and heavy weapon, fighting more defensively at the cost of speed. Ranger stance uses a pair of daggers and is all about balancing swift attacks with well-timed dodges. Right off the bat, it becomes clear that Ranger stance is highly superior to the sluggish Warrior style, a style that slows combat to a crawl at the best of times. Not only is it more risky and excitingly fluid to play in Ranger stance, but the attacks are so quick that they deal far more damage over time than even significantly more powerful Warrior weapons. Plus, you get to sneak up on enemies and deal extra backstab damage with daggers, which can always help even a fight.

Our hero - named Vulcan by NPCs, even if you choose another name - can deal ranged damage with a crossbow, as well as lay explosive traps on the ground. With their power to interrupt attacks or send enemies sprawling to the ground, these tools provide a crucial tactical edge in battle, though maintaining the resources to keep using them can be tricky. If one can do so, however, one shouldn't go into a big battle without a few bolts and traps on hand.

The aforementioned Demon comes into play shortly after the game's opening chapter, adding yet more combat capabilities to Vulcan's arsenal. As the game's name suggests, flame is the theme of the players' magical augmentations, providing fireballs, fiery shields, or a wreath of flame that covers weapon blades and boosts damage. At various junctures, this Demon will provide choices for the player, offering an alternative route through the campaign. Whether one listens to or ignores the voice in one's head affects the outcome of the story.

A simple leveling system uses skill trees to boost one's Warrior, Ranger, and fire magic abilities, while a separate perk feature adds a variety of passive bonuses, from health upgrades to increased chances of finding items on slain enemies. There's also a crafting system, allowing players to create their own consumables or weapon upgrades, and the usual slew of new weapons and armor pieces to keep things interesting.