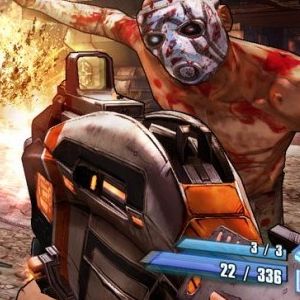 Nobody can take away the impressive fact that Borderlands 2 has been ported to the PlayStation Vita with almost zero compromise in the content department. It's remarkable that Iron Galaxy got the entire game onto Sony's handheld system, and that it actually works. It's hard to say that Borderlands 2 is a bad port, because one gets the impression that Iron Galaxy did its very best, and that the PS Vita has been pushed to the limit in order to get as faithful a replication of the shooter-looter sequel as possible.

That said, one cannot overlook the fact that, at its very best, the PS Vita version is the very worst Borderlands 2 experience available. Whether this is the fault of the game or the system's limitations is up for debate, but the simple fact remains - every alternative is better than the PS Vita option, despite how undeniably impressive it is.

This is not to say the PS Vita port is an absolutely terrible experience. I've had a lot of fun returning to Pandora on a pocket-sized scale, and the fact that it packs in all of the downloadable content - including the Mechromancer and Psycho characters - means that you get a ton of extra playtime for a regular entry fee. Borderlands 2 is, itself, a pretty damn great game, and the baseline of fun it provides raises its head fairly often on the Vita.

As one might expect, there are graphical trade-offs, with the visuals running on what would be fairly low settings on a PC. However, the Vita's small screen makes it look pretty sweet regardless, and the full range of voiceovers does a lot to make this feel like a complete game. There are some pretty hefty loading times between areas, unfortunately, though these are the kind of trade-offs one already expects in a PS Vita port.

Less expected is the litany of other concessions that impact the game's quality almost constantly. Starting with the reduction of four-player to two-player co-op, and only going downhill from there, Borderlands 2 on the Vita is a showcase of port bargaining, ranging from the mildly irritating to the borderline deal-breaking.

First of all, while a decent job has been done to make a sensible and intuitive control scheme, the added touch panel controls are unreliably laggy. The left side is touched for sprinting, and the right side is used for melee attacks, though they only work about half the time. The touch screen controls, used for special abilities and grenades, at least work far better, but since sprinting and melee get utilized far more regularly, the issue is a frequent pain in the arse. Of course, since it's way too easy to hit the touch pad while playing any Vita game, swapping the controls (and there are options to rebind things, thankfully) wouldn't be an adequate solution - the complaint would just change to frequently wasting abilities and grenades by accident.

There's some pretty poor audio lag, with dialogue and player character reactions occurring up to several notable seconds after they ought to. At other times, the entire game audio cuts out completely, with some cutscenes and combat sequences having to be played in silence, or with only half the sound effects triggering.

As you might expect, framerate problems occur at every turn, with the game slowing down to an excruciating crawl at the best of times, and never truly hopping at a decent pace. Texture pop-in is impossible to ignore, with vast quantities of the environment appearing malformed and hideous before suddenly snapping into something approaching acceptable.

Menus are unresponsive, and to top it all off, the game runs a likely risk of freezing completely and requiring a full restart. That's what you're dealing with when you attempt to enjoy the portable version of Borderlands 2 - a sluggish, inconsistent, choppy, plainly inferior experience that would never have been acceptable had it been what the initial console and PC releases were like.

This leads us to the burning questions - if something wouldn't be acceptable in the original version, should it be ignored in a portable port? Is it okay if a game is a markedly lesser experience than it was, just because the venue has changed? In criticizing a game like this, are we actively reviewing the software, or are we just judging the hardware it's presented on?

In truth, while these questions are all quite interesting, they can all be sidestepped with the simplest answer - Borderlands 2 is a great game that has has its kneecaps broken in the switch from high end gaming machine to portable system. A golf clap is deserved for the attempt, but while Borderlands 2 is still a solid laugh on the Vita, that doesn't take away from the fact that literally every other way to play it is immeasurably better.

Bottom Line: That Borderlands 2 has been squeezed onto the PS Vita with all of its extra content is commendable. That it had to become a far worse game in the process is not.

Recommendation: If you don't have access to an Xbox 360, PS3, or decent gaming PC, and you have never seen Borderlands 2 in action, then I can recommend this. If you have another way to experience the game, then you really have no reason to go for this.