Developed by Nintendo EAD Group No. 1. Published by Nintendo. Released May 30, 2014. Available on Wii U (reviewed). 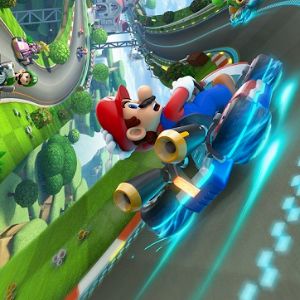 Mario Kart 8 does not change the status quo. It is, at its heart, the same game that Nintendo has been selling for over twenty years. There are some changes, but the game continues to trade on its undeniably fun core gameplay while adding small features and twists that keep it fresh. MK8 does much better at this than either Mario Kart Wii or Mario Kart 7, with good course design and customizable features, as well as an anti-gravity mode that's more than just a simple gimmick and actually affects play. This is still fundamentally the game you think it is from previous installments, but it's the most fun I've had with a new Mario Kart since Double Dash on the gamecube. The controls are smooth with no strangeness and the graphics are beautiful.

These are small improvements, and coupled with the game's general speediness and desire that you should get to actually really play instead of deal with some of the more frustrating random elements, it's probably the best Mario Kart ever. For all that, though, it is still an iterative release. It is about honing a distinct style of gameplay into the best form it can be in. This time, it feels like Nintendo has succeeded. The game is solidly better than its predecessors, and feels new and fun enough that it decidedly deserves to exist. Mario Kart 8 is nearly all steps forward and no steps back.

Returning from previous titles is the standard variety of Mario racers - perhaps a few more than in previous titles, since you can import any of your Miis to race. You've got the normal 32 courses, 16 of which are brand new and 16 of which are remixes of old courses. The selection of old remixes should tickle just about any fan's nostalgia buttons, since the oldest date back to the first game in the series. The remixed courses take advantage of the game's new feature, anti-gravity racing, to add secret routes and variety to difficult segments. Some of those are quite clever, but unlike gliding and underwater driving from 7, anti-gravity does change a small mechanic about the game. While it's usually a bad idea to slam into other karts, if anti-gravity is on then you get a speed boost for hitting others. Each of the game's Grand Prix modes, the "official" sets of four races which you can complete to get trophies, is decently balanced to ramp up difficulty over time and leave you feeling prepared for the more difficult races to come. The new courses are satisfying and varied, with a few approaching genuine brilliance. One map, for example, features racing among clouds and flying ships, constantly throwing new tight turns, route changes, and obstacle variety at the players. Another is a downhill slalom, with varied environments on each "lap" - really three distinct legs - of the course.

The standard features of time trials against your best records and a battle mode are still available. How much you get out of time trials will be up to your own sense of perfectionism, but if you found battle mode to be a key component of your Mario Kart experience then you'll probably find MK8's to be pretty disappointing. Instead of arenas, battle now takes place on the game's regular courses, with players being able to drive in either direction. It's a far cry from the interesting design of open arenas in previous games. Other than the basic modes, you're able to customize your own set of rules for a circuit of between 3 and 32 tracks - and it's pleasing to see that nearly any rule is available to you. From difficulty of the game's AI, to speed, to what types of items or karts are available. While ultra-specific item customization would have been nice, I didn't miss it after an initial wistful desire.